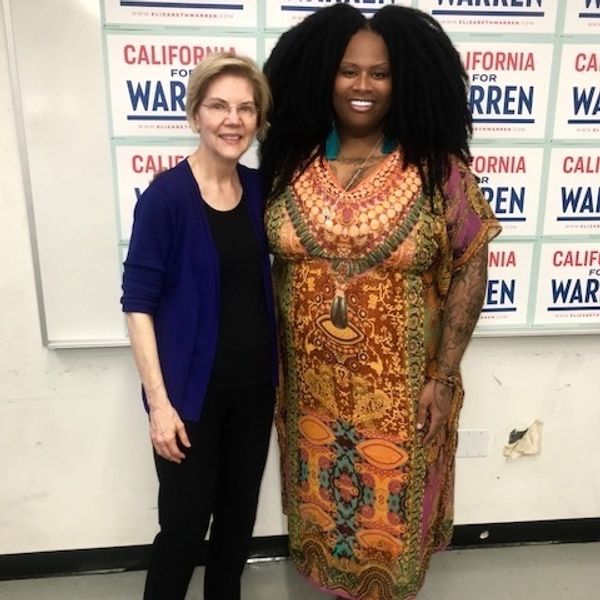 "We deserve a president who is going to change the system in a way that works for everyone," human rights advocate, political commentator and trans activist Ashlee Marie Preston passionately proclaimed during ESSENCE festival in New Orleans earlier this month. "And that person is Elizabeth Warren!" Backstage, a beaming Warren watched with rapt attention on a monitor as she and her team cheered on Preston. Later, Warren shared an Instagram shot of her with Preston, smiling with an energy mirroring Warren's.

Preston has been a political critic and activist for years, writing for publications like Teen Vogue, Billboard, VICE, and Playboy. She is a fixture on The Young Turks network where she discusses complex sociopolitical issues, and regularly speaks at universities, rallies, protests, think tanks, and cultural events all over the world. At this point there is no clear frontrunner for 2020, and whereas in the 2016 Democratic primaries, the race was more clearly divided between the progressive camp and mainstream moderates, in the 2020 primaries, there are several progressive candidates (as well as several moderate candidates) all looking to court similar voters. And as every Democratic candidate is vying for support from prominent progressive voices, it's notable when high profile names like Preston's's share an endorsement.

And what's perhaps just as notable, is how quickly certain topics and issues that might have been seen as on the fringe in 2016 have become topics of serious consideration — if not outright mainstream — in this cycle. From universal healthcare to reparations, decriminalization of illegal immigration to tuition-free college, more and more big ideas are being embraced by Democratic candidates, including Warren. Along with this comes a certain consideration of and fluency for talking about issues affecting the LGBTQ+ community and intersectionality that was little discussed even four years ago.

In an interview with PAPER, Warren shared, "We need to build a lasting foundation for LGBTQ+ rights until each and every person feels safe to be who they are and to love who they love. As president, I would fight to extend protections for LGBTQ+ Americans, particularly transgender and gender non-conforming individuals, who continue to face discrimination in housing, education, employment, and health care.

Related | We Will Not Be Erased: 40 GNC and Trans People Sound Off on Trump's Memo

"I recently reintroduced the Refund Equality Act, which would allow same-sex couples to claim the tax refunds they were denied before marriage equality was the law of the land. The murder of trans Americans is a crisis. In 2018, at least 26 trans people were murdered in the US, the majority Black transgender women. We will fight this and we will continue to say their names: Dana Martin. Ashanti Carmon. Claire Legato. Muhlaysia Booker. Paris Cameron. Michelle 'Tamika' Washington. Chynal Lindsey. Jazzaline Ware. Chanel Scurlock. Zoe Spears. I'm committed to fighting side-by-side until all Americans can live with dignity, autonomy, and the freedom to be who they are."

​Related | What Will It Take to Stop the Killings of Black Trans Women?​

In reacting to Preston's endorsement, Senator Warren went on to cite Preston's work being "on the front lines of the fight for LGBTQ+ rights and trans visibility, tirelessly speaking up for the marginalized and confronting the epidemic of violence facing the trans community, and, in particular, trans women of color."

Preston continues, "When I spent some time with her backstage, I was struck by the immense gratitude that poured from her heart," Preston reveals. "A sharp contrast from her hearing floor heroics, she was one of the most humble, nurturing, and joyous people you could ever meet. Her attributes as an attentive listener, folksy truth-teller, and her grounded perspective not only made her relatable — it made her my choice for president."

Warren's relatability has been key to her success, successfully creating a national grassroots campaign, now with enough political clout to put her among the top runners of the 2020 Democratic ticket (Warren brought in $19.1 million over the last three months, as opposed to Sanders' $18 million and Harris' $12 million — Warren's donations average $28).

"This campaign is about grassroots, about the doors knocked on, the phone calls made, the texts sent — at house parties and town halls across all 50 states and 7 territories," Warren tells us. "It's about people of all ages and backgrounds engaging with big ideas — more and more people getting in the fight and saying, this matters to me. Maybe it's universal child care, student loan debt cancellation, Medicare for All, or immigration reform — these big ideas affect all of our lives in real ways, and that's what makes them worth fighting for.

It's easy to give up. To be cynical. To take in everything that's happening in the news right now and decide, it's just too hard. But that's exactly what people told the suffragettes, the early labor organizers, civil rights leaders, and the LGBTQ+ rights activists who got marriage equality to become the law of the land. We've got to keep reminding ourselves that progress is hard won: we are where we are today because every one of them stayed in the fight."