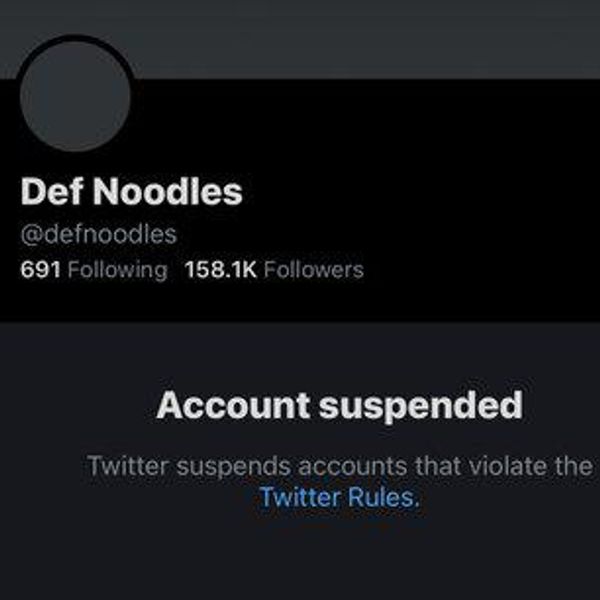 Dennis Feitosa, or more famously known as Defnoodles, has been permanently suspended from his Twitter account. This comes as a shock to not only his fans but himself included since it is unclear as to what "exactly" he has been suspended for.

Defnoodles has been a proactive and satirical source of media for viewers wanting the gossip within the influencer/ TikTok community. Fans noticed the account suspension on July 13 in which Feitosa quickly took to Youtube to address the account ban. Defnoodles criticized the suspension, interjecting his own theories about the plausible causes with snippets from Eminem's "Stan."

Back in March, Feitosa spoke to Vulture and described the news he covers as "the most banal and irrelevant stories that anybody could be talking about." Doubling down, he went on to say, "This is all soft journalism and a lot of the time it's just presented with such seriousness, and people take it so seriously. I'm making fun of how these non-stories are presented and framed in this way that ends up generating all this outrage. At the end of the day, it's a commentary on this independent social media sphere that fuels so much of this outrage and backlash."

After the account termination, Defnoodles posted an update to his secondary personal account, "gowithdennis," where he further speculated that he'd been mass reported. In the statement, he reminded fans that he was given no reason as to why his account had suddenly been taken offline. Twitter provided an answer a day later in a statement to Business Insider.

Twitter claimed that Feitosa had been booted from the platform because of supposed "rule violation," though not specifying which rules the account had broke.

In the meantime, Defnoodles said that he will continue to have an online presence, posting news updates via Instagram and Youtube.