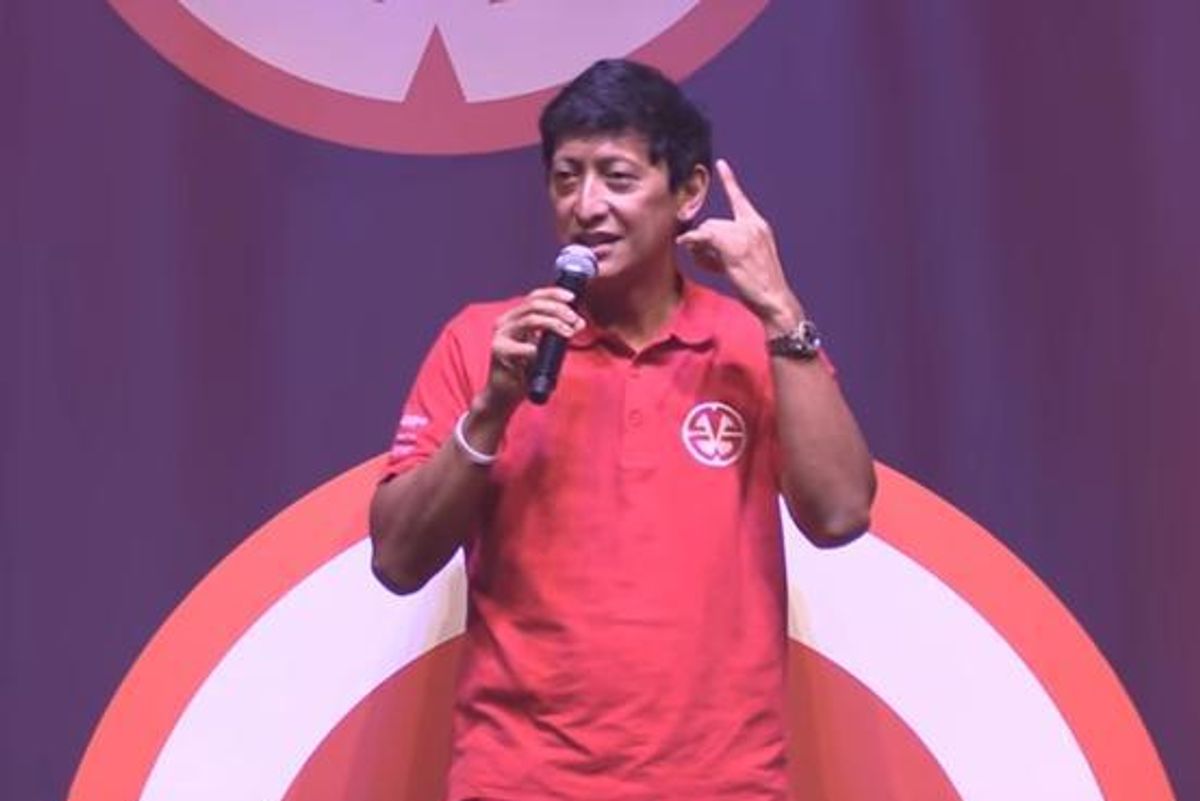 Dan Nainan, *ostensibly* a globe trotting professional comedian and avid Twitter-blocker, has been something of an internet enigma for years.

For years, comedians and writers have consistently called him out for a variety of offenses, like buying fake Twitter followers, supernatural arrogance, like bragging about flying first class, sweet hotel perks, and voting for Donald Trump, Tesla stock, and straight-up profoundly unfunny comedy that somehow lands him high-paying corporate gigs.

Today, Nainan was the subject of this truly incredible Daily Beast piece for consistently being referenced and interviewed by other media outlets, including Forbes and Cosmopolitan, as a millennial.

Here's the thing, though (as the article's writer Ben Collins points out): Dan Nainan is not a millennial. He is 55-years-old.

Nainan, as we have come to discover, claims to be at least 20 years younger than that (35, if you're bad at math like me), and has been pedaling this myth of being a member of the upper-most-age bracket of the millennial tag, but was actually born in 1961.

Speaking to other comedians, and eventually Dan himself, Collins went on a deep dive, recounting Nainan's personal legend (beginning with him leaving a senior position at Intel for comedy after 9/11) while discovering that the comic's story is even more full of holes than one could even imagine.

Highlights from this insane piece:

Then, there it is on paper: a Maryland traffic court case from last year. "Failure to display registration card upon demand by police officer." Daniel Nainan of New York City. Date of birth: May 1961.

And then, for good measure, there's a Washington, D.C., Metropolitan Police Department incident report for the time a sprightly 32-year-old Nainan punched then-Daily Beast reporter Josh Rogin after he made fun of his set at a D.C. comedy club in 2013. (Rogin and I have never met, for what it's worth.)

Under "exact age or range" it says this: 52. Nainan pleaded guilty and served probation.

A Virginia speeding ticket in the database Lexis-Nexis says Nainan was pulled over for speeding in 1987. The ticket is so old that it's not retrievable anywhere but on archived public-records searches. Fairfax County General District Court only retains records for resolved traffic cases for 10 years, according to both a FCGDC spokesperson and Virginia law.

"He can play 19 instruments. He speaks x number of languages fluently, flies first class, drives a Tesla. I've never met anybody that cared more about what other people thought," said Robinson. "Did he tell you about how he's able to slam dunk a basketball?"

On Nainan's Machiavellian, psychotic ways to counter his skeptics:

There were times, Robinson said, where it got out of hand. Robinson claims Nainan called his bosses at his day job at one point to try to get him fired.

"I saw him. I made fun of him. I just made fun of the practice of what he was doing once. He went through a criminal history. He talked to my employers," said Robinson.

"Then there was that email he offered to fight me to the death on the Isle of Man."

That's not a joke.

Dan Nainan has the president's number:

"It's an 800 number. He was calling the switchboard of the network," he said. "In the same screenshot, he has Barack Obama calling him. Like, it says 'Barack Obama.' He's trying to get us to believe he's talking to the president about who knows what."

Maybe it's a bit?

"He's not funny enough to do that as a joke," said Maher. "It would be funny if it was performance art. But it's not. He does this constantly."