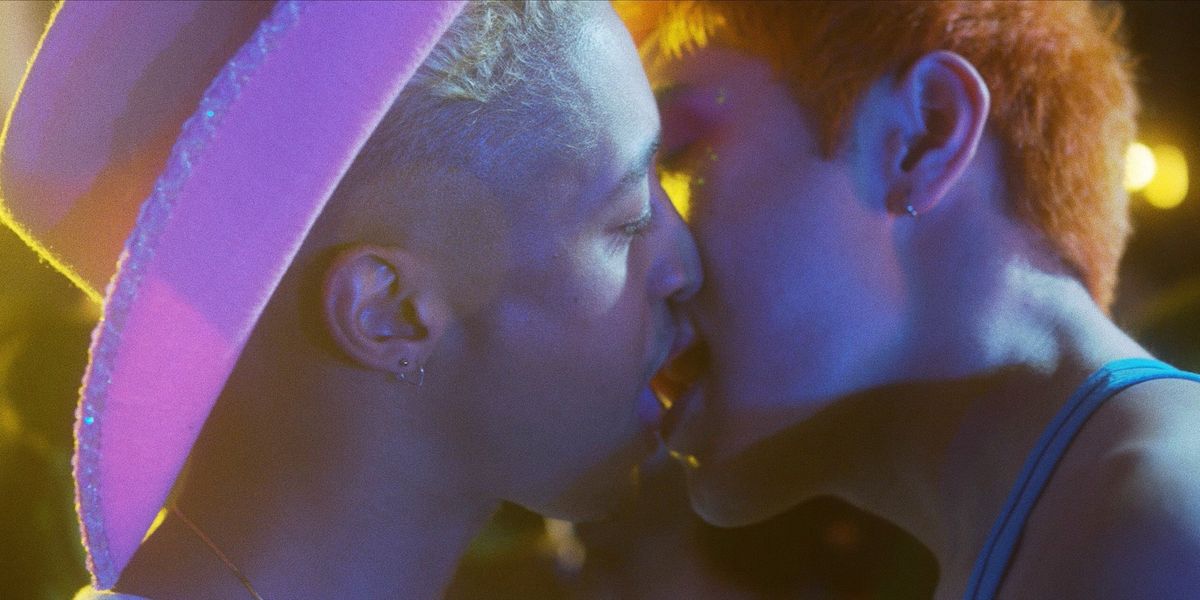 New Web Series Finds Beauty in Being Queer and Messy

As a Black, gay filmmaker from Chicago, Vincent Martell says he never saw himself properly represented in the characters he watched on TV, and he was tired of waiting for people in mainstream media to get it right. While working as a wardrobe stylist on the set of Brown Girls, a 2017 web series exploring friendship between women and queer people of color, Martell finally saw an alternative. Seeing a cast of mostly women and QTPOC boldly telling their own stories led Martell to creating Damaged Goods, a new web series premiering online on March 26.

Damaged Goods follows a group of four queer artists of color as they struggle with self-identity and survival in Chicago. The characters include Sanavi, a young creative professional played by Aashvi Patel; Caleb, a genderqueer club kid played by Chufue Yang; Marlo, a Black wellness social media influencer played by Abena Boamah; and Ezra, an aspiring artist played by Nosakhere Cash-O'Bannon. They face a range of issues throughout the series, such as dismantling a workplace "boys club," balancing nightlife while losing access to health insurance, finding one's own voice as the caretaker of the friend group, and dealing drugs to support artistic endeavors.

The six-episode series was produced by VAM Studio, a team of filmmakers of color, women and queer people who started underground in Chicago's arts and queer nightlife scene. VAM is now widely known for directing videos and other content for the likes of Jamila Woods, KC Ortiz, Shea Couleé, and Junglepussy.

Read PAPER's conversation with director and co-writer Martell on the importance of letting queer people of color tell their own stories and finding beauty in messiness:

What is Damaged Goods about and how did the story come to you?

Damaged Goods is a story about community and navigating life as an artist of color or queer artist. I always wanted to create narratives centered around my chosen family and what we've been through together. So I crafted this world with co-writer K.B Woodson, who's also my cousin and also incredibly gay. Zak Payne joined as another co-writer, and we hit it out of the park. It's about people like us living in our weirdness, and realizing the things we thought were wrong about ourselves are actually beautiful.

What is the inspiration behind the series' title?

Damaged Goods as a title captures these characters being incredibly nuanced and complex. It's my way of unapologetically portraying these characters as messy, because that's what's real. I'm a messy person, and being messy is something we can all relate to at some point.

"The more pieces of work that speak to those marginalized communities, the more possible these opportunities seem to that audience."

Why was it important that you centered queer artists of color in this series?

I've never seen proper representation of myself as a gay, Black man. We were tired of waiting for people to figure it out, so we took matters into our own hands. The representation we have seen is plastic — based off a white, Hollywood perspective and not authentic or relatable. Growing up without any proper characters on TV to look up to can be detrimental to someone's psyche, and we're just now seeing a shift in Hollywood where the people behind the lens are also in front of the lens. There's power in that, and artists around the world can connect with these experiences.

I fantasize about the kind of influence Damaged Goods could have on an 18-year-old gay, Black boy or a 16-year-old, queer girl. The more pieces of work that speak to those marginalized communities, the more possible these opportunities seem to that audience. I only saw this web series as an accessible thing to do after working on Brown Girls, the web series created by our executive producers Sam Bailey and Fatimah Asghar. I hope Damaged Goods can do that for the next generation.

How does Damaged Goods address representation within the LGBTQ community?

Within the LGBTQ community, there's so much discrimination and prejudices, and we tackle that in the series. For instance, Caleb, one of the four main characters, is a gay, Asian man played by Chufue Yang. We wanted to show this character in very raunchy sex scenes as the more dominant one because Asian men are rarely depicted as more dominant in gay culture. We intentionally touched upon these points that speak to the complexities within our community.

What other bold approaches did you take?

I started creating this knowing I didn't want to limit myself in any capacity. If I was going to make this series, I had to push the limits. I'm tired of safe TV and think it's detrimental to what media can be. So in Damaged Goods, I made the gay sex scenes as edgy, raw and real as possible. I made sure the drug use was an authentic representation of drug use within the nightlight community. Pushing these limits created very real, unapologetic moments in the series.

Why did you choose to tell this story as a web series?

It's so accessible. I was excited that my series could immediately resonate and be in the homes of young creatives around the world. I also love how a web series can show Hollywood filmmakers how to create content that starts small, but can build into a network TV show, like Brown Girls has done. The quality of this show will blow people away, because we shot it as though it could land on a network TV channel or streaming site.

What was it like to portray the queer art and culture of Chicago?

It felt so familiar to me because I started VAM Studio capturing that queer scene on camera. Those experiences informed the show's themes of chosen family and community. I get chills thinking about it, but we made sure that in every frame, you saw a piece of Chicago in some way. If you didn't see it, you were hearing it, because all the music was contributed by queer Chicago artists and directed by Ariel Zetina, who is my god in the house DJ scene. Just seeing how many people were involved in this production makes me emotional.

"I'm tired of safe TV and think it's detrimental to what media can be. So in Damaged Goods, I made the gay sex scenes as edgy, raw and real as possible. "

What are you most proud of with Damaged Goods?

I'm proud of a lot, but especially of the cast and crew. Every single person on the set was so dedicated and saw this project as being bigger than themselves. There were moments when I would look behind me and see a crew of queer people of color, women, femmes and trans people, and it was beautiful. I want to see more of that, and not just on my sets. We're really showing what our community is capable of, and hopefully inspiring others to use this as a template. That was Brown Girls for me, and hopefully we can do that for more people.

How have you grown as an artist through creating Damaged Goods?

I grew up a gay artist of color in Chicago. I don't come from money and didn't have massive film industry connections when starting out. It was incredibly lonely, and I was depressed a lot. My entire being has been a fight, and I've learned to see the beauty in that, especially in surviving it. Creating Damaged Goods showed me how much love and support has surrounded me in my work for so long.

I've realized I'm doing something incredibly special, and I need to get out of my head to see the bigger picture. I think of my younger self — the gay little boy who was incredibly shy, lonely and sensitive to the world — and I realize that boy would be so proud to see his work living outside of Chicago and resonating with people globally.