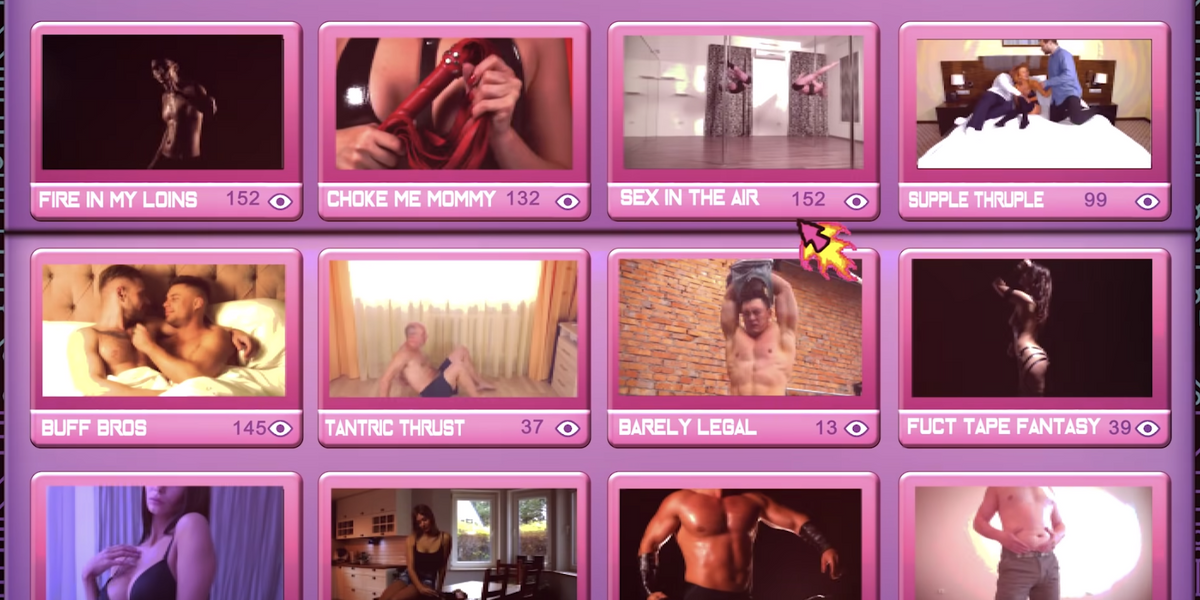 Cyber Sex Will See Us Through the Apocalypse

The answer, it seems, is cyber sex, something I'm intimately familiar with but haven't engaged in since I was starring in a high school production of Dames at Sea. In those days, it was thrilling to log onto anonymous AOL chatrooms (or, more illicitly, the chat site run by an erotica website I frequented where I regularly pretended to be a 19-year-old girl...foreshadowing). In those days, I was having cyber sex because I didn't have access to real sex. I was a teenager, I lived with my parents, I was a virgin who could barely drive.

But today, there's a much more pressing reason to avoid human contact. COVID-19 has brought the world to a halt, forcing those among us in non-essential jobs to practice social distancing and self quarantine. In only a week, I've seen my fellow captives cycle from memes about Shakespeare's productivity during his own plague-induced quarantine to excitement over Animal Crossing, and in between public horniness has become increasingly acceptable on social media. And that's not to mention everyone who has started an OnlyFans.

Those of us who aren't lucky enough to be quarantined with a significant other (and it'll be very interesting to see how long those relationships last if/when this ends) are left to our own devices, and there's only so much porn to be consumed before it all blends together into one amorphous blop of flesh. So: welcome to the cyber sex renaissance! Sure, "sexting" is an indelible part of our cultural lexicon, but usually as a prelude to an actual hookup. But as we watch the world fall apart around us from inside our apartments, growing hornier by the day, if the price of human connection is a few blurry dick pics taken with an android and some creative wordplay, so be it.

And even in Italy, where coronavirus has hit the hardest, leaving the entire population sheltered in place, those stuck inside are still finding ways to get off. "I'm really into sexting in general but lately it's been crazy," says Sebastiano, who lives in Milan. For him, sexting is about more than jerking off with a stranger over FaceTime. "In general, I'm a really cerebral person — the brain is THE first sexual organ for me. So I like when things are fun, and witty, and interesting when it comes to cybersex, that's why I like sexting (and people who can do it well)." As he's not a fan of extreme roleplay, his chats center more around imagining what he and his partner would do to each other if they were hooking up IRL. "Escapism is extremely important for me, now more than ever. Everything that can stop me from thinking and overthinking is more than welcome."

Just as we've seen skeptics all around the world who still believe social distancing is an overreaction to a pandemic, there are plenty of folks who aren't satisfied with sliding into someone's DMs — they still want the real thing. "There have been a lot of people looking to meet," says Paxton, who is clear with all her matches that she's only looking to chat. "There are a bunch of ppl with 'COVID-19 negative' in their profile," she adds. Her usual response to people asking her to meet up? "This is a pandemic, dude." Thankfully, the men she's encountered looking for sex are mostly "a bit passé and dumb about it," rather than aggressive.

Will, a gay man in New York City, said that the weekend after New York shut down bars and restaurants, a friend was "very surprised" that he didn't want to attend a sex party. "Granted that was several days before the social distancing stuff really felt urgent," he says. "But still."

Related | Why Does Grindr Have Different Rules for Trans Women?

Which begs the question: when governments all over the world are placing restrictions on everyday life in an attempt to flatten the curve and stop the spread of coronavirus, why are sex parties and hookup apps not doing the same? A Tinder spokesperson told PAPER that the app is using an in-app card to redirect users to the World Health Organization for recommendations, and a Grindr representative insists that "the health and safety of our users is a top priority...we are advising users to follow guidelines provided by the CDC, and have published these guidelines in the Grindr app to help users make the best informed decisions when interacting with others." Yet Grindr has also been advertising a week of their XTRA membership for free, encouraging users to use the app more during the crisis.

This weekend, the New York City Health Department released a memo explaining that in the midst of a pandemic, "you are your safest sex partner. Especially if you wash your hands (and any sex toys) with soap and water for at least 20 seconds before and after sex." They also recommended having sex with only people you live with — bet your roommate is looking pretty tasty about now — and that "if you usually meet your sex partners online or make a living by having sex, consider taking a break from in-person dates. Video dates, sexting or chat rooms may be options for you."

But just like those irresponsible college kids on the beach in Clearwater, Florida, we can't expect that everyone is going to follow the rules. If governments are going to shut down non-essential business, install curfews or require that residents shelter in place, shouldn't hookup apps be taking more strident measures to discourage horny idiots from thinking with their dicks? Intimacy is vital to our mental health, but shouldn't our physical health come first right now? These apps are a vital resource to those looking for human connection during the biggest global health crisis of our lives, but couldn't suspending app services for a few weeks and then reintroducing them (with even more explicit warnings not to meet up) be a better way to discourage people from potentially spreading COVID-19 to their partners, and that partners partners, and so on? On Monday, 20,000 confirmed cases of COVID-19 were reported in New York, with 12,000 in New York City. Now is the time for drastic action.

On the other hand, the same way that group Zoom calls and Instagram live sessions (y'all need to chill with those) are helping us feel less lonely as we work our way through giant tubs of peanut butter from our third floor walk up bunkers, (virtually) getting off with someone is another way to affirm that despite being isolated, we're not alone. "I struggle with depression and anxiety, so times like this can be pretty challenging," says Sebastiano from Italy, where more than 4,800 citizens have died.

"So, yes, the other night I was feeling very anxious and then I started talking with this guy on Instagram and we had a full sexting session with pics and all that went on for like 40 minutes. It really helped to distract myself from the pain and anxiety I was feeling weighing on my chest." To paraphrase Peaches, "sext the pain away."