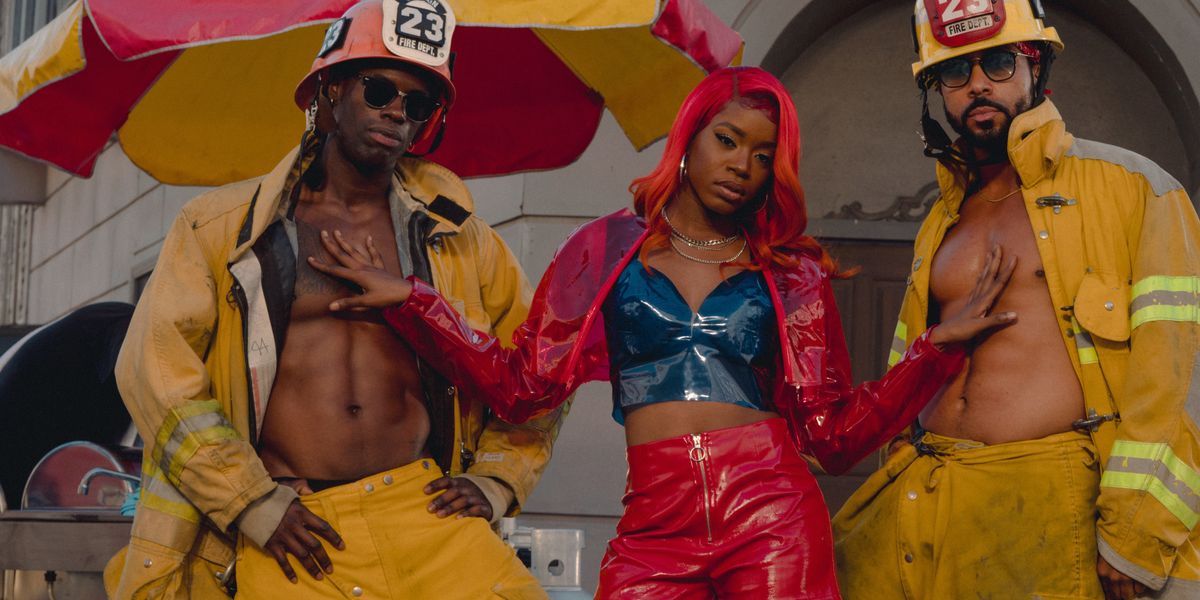 If you were bored during quarantine, there's a big chance you downloaded TikTok and tried to throw it back. And there's an even bigger chance you were doing it to Cookiee Kawaii's airy vocals asking, "If I back it up, is it fat enough?" "Vibe" has enjoyed lasting power on TikTok with its catchy, cheeky lyrics and, more recently, got an update as Tyga appeared on a remixed version, which came out earlier this month.

Cookiee's breakthrough happened in February 2020 when "Vibe" went viral on TikTok and racked up more than 50 million listens. But as she releases the second installment of her Club Soda series, the New Jersey native wants to prove she is much more than a fleeting phenomenon, and is here to give Jersey club music its due.

PAPER spoke to Cookiee to get the lowdown on the perks and downfalls of TikTok fame, the power of promoting yourself and why people need to stop sleeping on Jersey club.

How was the experience of "Vibe" going viral on TikTok while we were all stuck inside?

When I found out my song was going viral, I didn't even have a TikTok account. My friend Legacy hit me up and she was like, "Hey, your song's going viral on TikTok. You should check it out." So I instantly made an account and at the time there were only about 2000 videos made. So I hopped right into promo and started letting people know like, "Hey, this is my song." Now, about 2 million videos have been made, it's crazy.

At first, I thought COVID was hurting my situation because I didn't get to perform or do what normal people would do when their song goes viral. But it helped because the more we were locked down, the more videos people could make and the more creative they could get with their videos.

There's definitely something to be said about TikTok's power. Now, there's talk of it getting banned. What do you think that means for artists whose songs blow up on the app?

TikTok can definitely help any artists boost their music if you do it the right way. Because even to this day, a lot of people don't know "Vibe" is my song. I was actually getting bashed by people on TikTok just for commenting, "Hey, this is my song." People would be like, "No, it's not, this is so and so's song," because on TikTok if a person uses a sound, they would say they own it. So [TikTok] can help you if you get on top of promo, or else people will just use your song and not know who you are. They won't tag you or give you the recognition.

One of my friends, FlyBoyFu, has a song, "Laffy Taffy" going viral on TikTok. And again, people don't know it's his song. So I basically told him to comment under every video. If you go on TikTok, you'll see me under most of those videos saying, "Hey, thanks for using my song." As far as TikTok getting banned, I would hope that it doesn't get banned. It's not just for music. Kids dominate TikTok. They love it. They make the craziest videos. If it did get banned, it's still the same process: you have to promote yourself, no matter what app you're on.

The fact that people don't get proper recognition for their songs being played so much on TikTok is for sure a huge problem for artists.

Dancers make challenges, too. They'll make a dance and it'll go viral and everyone's doing it. No one would know who made the dance. Once you start going viral, if you're not like some huge influencer with a huge following, your credit can be overlooked. From my experience, you have to fight for your credit. If you do the math, I have almost 55 million streams on "Vibe" and there's 2 million videos made on TikTok, but I only have like 147k followers on Instagram. That should let people know. It's still an uphill battle, but it's still a blessing. I wouldn't trade it for anything. I don't mind promoting myself. I've been doing it for years now.

Your "Vibe" remix recently came out with Tyga. That's a great example using this phenomenon and building off of it. How did that come about for you two?

The managers reached out to me and said, "Hey, how would you feel if Tyga was to be in the video?" And I was like, "Hell yeah! Let's do it." He really was in tune with what I was doing with the Jersey club culture and he just wanted to be a part of it. From there, he sent over his verse and we just did it. It actually happened pretty fast. Who would say no to that? That's a huge opportunity. I was shocked because when we shot the video, we were talking and he was just telling me that he actually listened to my other stuff, not just "Vibe." It was a great time.

How would you say Jersey club differs from more mainstream club music?

You can't mention Jersey club without mentioning the other genres. I feel like it thrives from Chicago house and it even comes from Baltimore club music. But what makes Jersey club different? I would definitely say our culture, like the whole Jersey club community. We have tons of dancers and tons of producers and tons of different vocalists or people that are actively pushing the genre. Cause again, you have Baltimore club, you have Chicago house, you even have Philly club music and Miami's doing their own style of club music down there, as well. I feel like with Jersey, our whole Jersey club community is a little bit more active. I think that's what separates us: the fact that Jersey club has been more consistent with putting out club music throughout the years.

How do both installments of the Club Soda project differentiate to you.

The first Club Soda is your first sip of my glass full of Jersey club bops that I'm going to give you. This second project, Club Soda, Vol. 2, is how you're getting more buildup of this Club Soda. I had to give people a taste of what Jersey club was because Club Soda, Vol. 1 dropped before "Vibe" went viral. Vol. 2 is a reintroduction to the world of who I am and what Jersey club is. It's that full glass of Club Soda to give you a taste of what we're doing in Jersey in the club field. I'm excited.

It's a weird thing to be dropping club music at a time where we can't really go to the club. What ways are you trying to connect with fans right now?

I go live a lot. I recently did what I like to call the, #throwitbackathon, on my live because I hit 1 million views on the "Vibe" official video. I had everyone join the live. We were just dancing, having fun, listening to my music. Whether it's Twitch, Instagram Live, Zoom, Discord, there's all these new things that I didn't know about until we went into quarantine. I'm finding so many different ways to engage and interact with followers online. So I go live a lot and I really engage with my fans online, whether it's answering DMs. I have tons of them, but I try to answer randomly when I can. I'm just staying in tune with them online. I feel like it's the best way, because we can't go to the clubs. And I've been dying. I want to hear my songs played on club speakers. It's a completely different experience. So you just got to turn people up at home. I plan on doing a #throwitbackathon maybe every week now, it was really lit.

What are you going to do the first time you can go to a club after all of this is hopefully over?

I'm going to run to the DJ booth and request that they play any of my songs. It doesn't have to be "Vibe." It could be any one of them. I would go to the clubs by myself sometimes just to hear music played that loud. It's completely different from listening to headphones. I want to see people react to it. I really like that connection music can create between people. That's one of the main reasons why I want to be a music artist. People don't have to know you at all, but they listen to your song and it can start so many conversations. I love that.