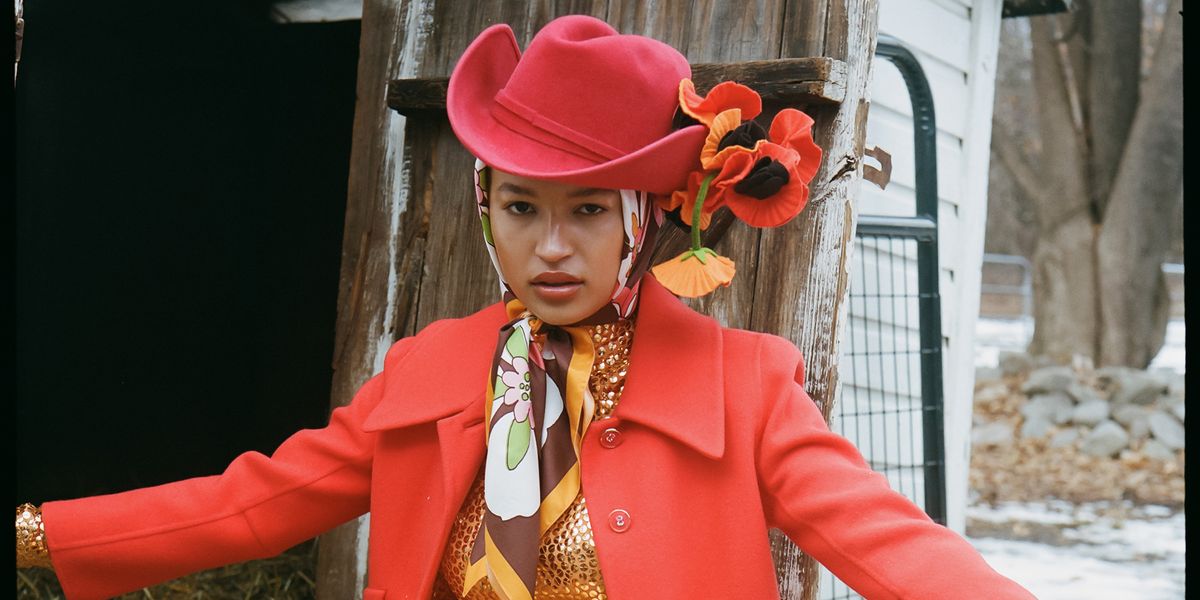 "You get the best of both worlds," a prepubescent Miley Cyrus once sang of her double life. Model Ciarda Hall, who prefers to go by her first name only these days, can relate. She's mastered the duality of a big city modeling career — walking for shows like Yeezy, Savage x Fenty, Alyx and Kim Shui — with a more small-town existence in upstate New York. She reconnected with childhood friends there after a few years of early career chaos.

"I was partying all the time, never answering my mom's calls, surrounded by a bunch of people who valued Instagram numbers over real love," she recalls. That return to her roots re-centered Ciarda and gave her a renewed sense of purpose — one less focused on an arbitrary algorithm. These days she's also set her sights on Hollywood, although that doesn't mean she's done with fashion. Just look at models like Cara Delevingne, Elizabeth Hurley and Brooke Shields, all of whom have proven that a model's success is not contained to the runway alone.

This new perspective is useful during a pandemic — she's excited to continue her career, but in due time. "I am way more worried about how we as humans will survive this rather than how fashion will," she says. Below, meet model Ciarda, photographed on her family farm in Fishkill, New York.

You grew up farming on your grandparents' farm in Ireland, where your mom is from. What was that like?

Getting to fly to Ireland all the time from when I was only one year old to my near 20s was incredible. Missing school for a bit and coming back with printed-out photos of me on the farm to show my class was a highlight of my childhood. My grandparents' farm was... iconic. It was a tiny house in a very small town called Kilmacthomas, surrounded by endless acres of fields belonging to them. It was like something out of an old film. My grandad only had sheep on the farm during my time there, and not many either, so that group of sheep were free to roam every field on the farm. Wouldn't see them for days sometimes. I would often go off into the back fields to find them and herd them for my grandad so he could make sure they weren't sick or hurt.

You began pursuing modeling at 15. What first captured your attention about modeling and what steps did you take to pursue it?

Me and my friend would always watch the Victoria's Secret Fashion Show and swore we were going to do it one day. That's all we knew about modeling. We wanted to be in that show. So first things first... how the hell do we become very tall and very skinny very quick? [Laughs]

Then your mother started taking you into the city to meet with some agencies.

Yes, and I was turned away as soon as I walked into each office. Oh my God that fucked me up. I would look things up like "how to grow 5 inches" or "if I stretch my legs a lot will they be longer eventually?" I definitely gave up for a bit but over time built confidence to try again, but with no agency. Well who would have thought years later I'd be walking in the most inclusive lingerie fashion show ever, next to some former VS supermodels even. A show that helped cancel VS shows forever. Never give up.

When we were talking earlier, you mentioned how early on you became lost in "this whole world," and how the friendships you were making modeling weren't the same as your friendships back home. What wasn't clicking for you?

This really upsets me, but I feel like I neglected my family and childhood friends for a while. I stayed in NYC and was partying all the time, never answering my mom's calls, surrounded by a bunch of people who valued Instagram numbers over real love. I was also in a really dark relationship for a while and became quite depressed. I was just done with everyone.

"I am way more worried about how we as humans will survive this rather than how fashion will."

You ended up going home to upstate New York and reconnecting with your childhood best friends. How did that experience, returning to your roots, affect you?

After not being in contact for some time you'd think our first time hanging out again would be kind of weird. Nope. We picked up just where we left off. We were kids again. It felt really amazing to have people back in my life who I know have always and will always love me for me no matter what. This encouraged me to tap into other parts of my childhood to find more happiness. I wanted to get back on a farm. If this isn't Hannah Montana: The Movie in real life I don't know what is.

And now you want to pursue acting. Has that always been a passion? And are there other models-turned-actors whose careers you might be looking at as some sort of blueprint?

Yep. Low-key always have wanted to. I love fashion and modeling but there's something about embodying other characters that I find really fun and interesting. I had a show on YouTube when I was 11 with like one subscriber [laughs]. It was a series about these two characters me and my friend Sam created, and it was all improv. For 11-year-olds it was actually really good. Now being older, I would love to play roles in really good films and at the same time get to shoot amazing high fashion editorial work. So there's nobody in particular that I'd like to compare my career to. I mean, everyone has their own path, and I'm excited for mine.

Obviously COVID-19 has greatly affected the fashion community and the world at large. In what ways would you like to see the industry move forward given everything that is going on?

There are so many predictions about what could happen next in fashion. Will there be no more Fashion Week? Will it all become digital? Who knows. For now though, I'm enjoying the self isolation at home shoots I've been seeing. But I must say I am way more worried about how we as humans will survive this rather than how fashion will.

Who are your heroes?

Who are your favorite folks to follow on social media?

I love a meme page.

What have you been doing in quarantine to find joy?

Honestly just relaxing, listening to music, and thinking to myself a lot. I've built a photo studio in my room somehow. So whenever I randomly get an idea I roll out of bed, play some music, and do a little photo shoot of myself. I've also built a fort in my room. The spiral is getting deep.