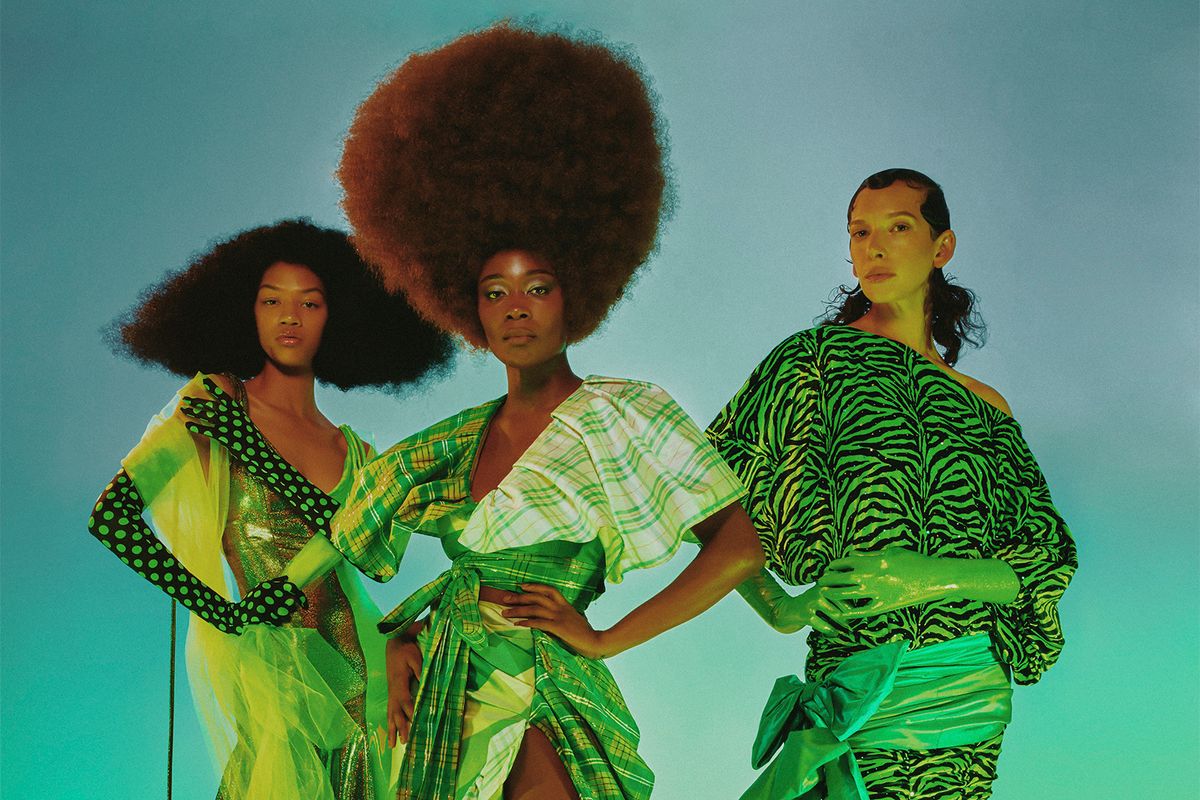 At the end of Christopher John Rogers' Spring 2020 show in September at NYFW, an audience that included front-row guests like fellow designers Joseph Altuzarra, Adam Selman and Pyer Moss' Kerby Jean-Raymond stood up in rapturous applause as models stormed the finale in iridescent greens, Swarovski crystal-adorned shirts and voluminous taffeta frocks. It was one of those shows where the energy from the room and emotions felt from the clothes lingered long after the final bow.

For any young designer, such a well-received debut on one of the biggest stages in fashion is cause for celebration. (Spring 2020 was his third season but his first time showing on the runway.) However, his profile would grow even higher just a few months later at the CFDA/Vogue Fashion Fund, where he took home the top prize of $400,000 and a year-long mentorship from Pierre-Yves Roussel, the CEO of Tory Burch.

As he walked toward the stage to accept his prize — clad in a cherry-red silk coat, matching jumpsuit and feathered neck wrap — it all seemed to come together for the now 26-year-old, who at the time was still working out of the small living room in his Brooklyn apartment. Suddenly, all of the biggest names in the fashion establishment took notice of the young, self-described "effeminate" gay Black man from Louisiana as he received one of the most prestigious awards in the industry.

"It's been chaotic," says Rogers of what his life has been like since that big win. "So many things are happening right now. I have an attorney, legal counsel, financial counsel..." he trails off before adding that he plans to move into a proper work studio in Soho the following week. At the time of our interview, he is in the middle of producing his spring collection ("our first full production run"), which is being assembled in New York City's Garment District, thanks to the money he received from the Fashion Fund. In the past, his team had to make everything by hand.

The larger budget has allowed him to focus on other things like elevating the product and construction, concepts particularly important this season as retailers start to carry his clothes for the first time. Meanwhile, his brand continues to be a hit with celebrities on the red carpet. His whimsical designs and flamboyant eveningwear have been worn by risk-taking stars like Cardi B and Lizzo. And before he even held his first runway show last year, Rogers fulfilled a career dream in dressing Michelle Obama, who sported a custom cyan suit for the last stop in her book tour.

"I think he's an incredible human being," says Law Roach, the stylist and image architect who's pulled several of Rogers' most fanciful creations for celebrities like Jameela Jamil and City Girls' Yung Miami and JT. "For me [Rogers] has the same sensibilities of Marc Jacobs, who's one of the most important and greatest American designers, period," he says. "When I think of Christopher's work, and his presence, and his potential, that's what I see."

Equally as praiseful is designer and former CFDA chairwoman Diane von Furstenberg, who was also at Rogers' debut runway show and whose brand employed Rogers as a full-time designer until he left to focus on his own label last spring. "He's a wonderful person," she says. "He has an extraordinary sense of color and he is completely untouched and unspoiled. That's why I absolutely encouraged him to do his own thing, so that he could invent himself and not get really bad habits from anyone. He's on the way and I'm very excited."

Rogers' enthusiasm for fashion stems from his childhood years in Baton Rouge, where he realized he wanted to have his own brand after watching Project Runway and immediately looking up fashion design schools and shows from designers like Alexander McQueen and John Galliano on YouTube.

"He has an extraordinary sense of color and he is completely untouched and unspoiled. That's why I absolutely encouraged him to do his own thing, so that he could invent himself." —Diane von Furstenberg

"I just became obsessed, like obsessed with fashion," says Rogers. "And just the ability for people to be feminine, or effeminate, and have it not be a bad thing. No matter how you identified, it seemed to always be celebrated. And because obviously I was just so effeminate, or I am so effeminate, I felt comfort in knowing that not only is it okay, but it's an amazing thing."

As Rogers learned more about the industry, he soon realized that the majority of top creative directors were white, and he made it a point to look up black fashion designers when he was in middle school. "I learned about Ann Lowe and Tracy Reese and Lawrence Steele," he says. "There are so many people we don't know about because we're not taught about them or they only had a brand for a little bit or whatever. But I knew that it wasn't impossible, and I knew that with hard work, anything would be possible."

Sure enough, Rogers went on to receive his BFA in Fashion/Apparel Design at the Savannah College of Art and Design, move to New York and quickly cement himself as one of the city's most promising "next gen" talents. In just a few seasons, he managed to cultivate a community of adoring fans who are drawn to his playful gowns, exaggerated ruffles and bursts of bright colors.

"I'm not cool, I'm just me. I just want to be your friend, and so hopefully when you put on my clothes you feel like I'm hugging you, or I'm like, 'You look sickening, bitch!'" —Christopher John Rogers

And lately, it seems he's been taking DVF's advice to heart. "I'm not trying to be anything but myself because apparently everything is working so far," he admits. "I don't feel the need to belong. [But] until very recently, I will say I was trying to be cool. Like, 'What are the things I can do to be cool and edgy and whatever?' But I'm not... I don't know, I'm not cool, I'm just me. I just want to be your friend, and so hopefully when you put on my clothes you feel like I'm hugging you, or I'm like, 'You look sickening, bitch!'"