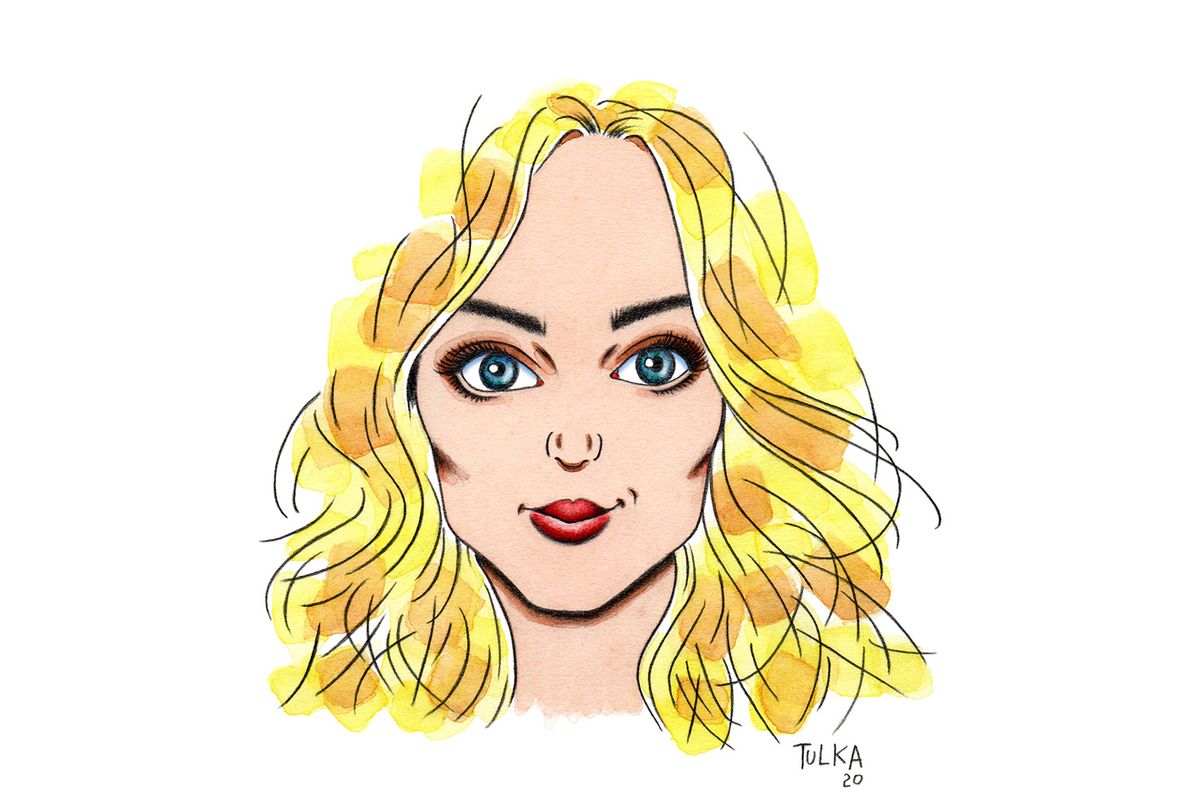 It takes Chloe Fineman a millisecond to answer when asked if she has a white whale celebrity impression — the one that is slightly out of the Saturday Night Live cast member's reach and she needs mere hours of fine-tuning to capture.

In this millisecond, Fineman is like Captain Ahab in a puff-sleeved Reformation dress who can just see that impression through the mist, gliding nearby through the water:

Of all the bullseye impersonations Fineman has performed on the 45th season of SNL — including self-help guru-turned-presidential-candidate Marianne Williamson, Timothée Chalamet, a supernaturally spot-on Britney Spears and Fleabag's Phoebe Waller-Bridge — LaBeouf keeps slipping through her fingers.

"There's got to be a way," she says on the phone from Los Angeles, where she is quarantining with her boyfriend. She'd even recently driven in 100-degree-heat across Los Angeles to chase a lead on good fake men's facial hair via an improv connection.

"I looked like an Amish husband — the beard wasn't right." Fineman says. "On top of that, I also look nothing like him — but I'm determined."

It's true that Fineman and LaBeouf share almost no resemblance, but, as is usually the case with master impressionists like herself, it's all about getting the voice correct.

Fineman says LaBeouf has the voice of "a California bro," with the undertow of a Southern drawl.

It's a sexy voice — there's a whisper of a black eye to it, or a cigarette behind its ear.

Reader, she nailed it.

Though she's on a mission to become the hard-edged LaBeouf, who, in real life has a large tattoo covering his torso of a Virgin Mary cradling a crying clown in her arms, Fineman says, as a child, she was drawn to anything associated with elegance.

Related | Crying Until You Laugh With Whitmer Thomas

Or, that is, elegance as interpreted by a performative "middle child" during the mid-90s.

The 31-year-old, who grew up in Berkeley, California, and has an older half-sister and younger sister, recounts going as a "little lady" for Halloween in kindergarten, wearing a black and gold velvet party dress she'd become enraptured by when she spotted it in a JCPenney.

"People were like, 'what are you supposed to be?'" To which a young trick-or-treating Fineman would reply, "I'm a young woman."

When she wasn't being a young woman, known in her family for overdressing for casual family gatherings and birthday parties, she played soccer and loved jazz dance. "I was very bad at leaping though," Fineman says. "So that ended. I couldn't leap."

But with the vigilant observational skills and antenna-like radar for picking up mannerisms that some funny people are born naturally blessed with, Fineman says she always loved doing impersonations.

Her earliest material were family members — some of whom ended up being the groundwork for her most uncanny SNL bits so far.

"People were telling me to try doing Meryl Streep, and I was like, 'how do you even do that?' But then I realized she and my mom are very similar, so, when I do Meryl Streep, it's weirdly kind of an impression of her, too."

Fineman debuted her Streep on her Instagram account, where she posts most of her impressions, running her fingers through her hair in that overcome Streep-ian way,

Fineman's Streep then made its television debut earlier this year during an Oscars segment on SNL's "Weekend Update," during which she unleashed a tour de force performance as the stars of Greta Gerwig's Little Women, including Streep, Chalamet and Saoirse Ronan.

When she does Marianne Williamson, she says she's really channeling her crunchy Jewish-Buddhist ("a Ju-Bu") aunt.

"I've definitely been to many a dinner with people like Marianne," she says. "I do really love her."

Fineman has never heard directly from Williamson or most of her other subjects, with the exception of the actress Busy Phillips, who was kind enough to give her notes. "She was like, 'it's less Drew Barrymore and more Chicago-sounding vocal fry,'" Fineman says. "She was right. The impression got a lot better. It was really kind of her."

She says her sponge brain for observing nuances and cadences never turns off.

"I'm a bit of a stalker," Fineman says. "I'll do the deepest dives on people and watch everything I can." Plus, her research never feels like work. "I naturally watch all of those Vogue '72 questions' videos anyways — stuff like the Vogue Grimes pregnancy makeup tutorial."

For instance, she watched everything she could by the 17-year-old YouTube star and singer Jojo Siwa after her sister sent her a link to some of her videos. She was like "this girl is an icon and has a line at Target."

"So I went down that rabbit hole, she says. "I found a video that someone has made of her just saying 'hi' like twelve times in a row."

But, as is likely the case with most of Fineman's rabbit hole odysseys, she seemingly absorbed some of Siwa's frontal lobe during the process, too, capturing the teenager's chipper mannerisms and fast, jumbled-together YouTube-y cadence with alarming accuracy.

Fineman, whose parents both now take improv classes for fun in the Bay Area, started getting into acting and theater as a teenager, when her high school tried to put on a production of The Vagina Monologues.

"I was like 'this is me," she says. "But Eve Ensler wouldn't give us the rights for some reason so we did it offsite at, like, a community theater and called it Vulva: La Revolucion, which is even more problematic."

She moved to New York City to attend Tisch School for the Arts at NYU, inspiring another character titled simply "Tisch acting school teacher." Fineman, donning a slightly disheveled pixie cut wig and a bright scarf, looks directly at the camera with a Mid-Atlantic smoker's rasp and says, "You have to grow a penis."

"I loved every second of it, " Fineman says of her time at Tisch. "I fully drank the kool-aid. I went to Stella Adler, too. I was wearing stage blacks four days a week. The teachers would say totally inappropriate things. I was actually told to grow a penis."

With her Adler penis grown, she relocated to LA to join the Groundlings, the illustrious improv group that begat SNL stars like Will Ferrell and Kristen Wiig. During this time, she continued to perfect various characters and impressions, amassing many wigs and social media followers, and harnessing the viral power of front-facing camera comedy.

Though hundreds of thousands of people had already clicked play on her flawless Williamson impression before she debuted it on SNL's premiere last September, the audience broke out into spontaneous applause after Fineman and her version of Williamson appeared during a Democratic Primary Presidential Debate cold-open sketch that also included Woody Harrelson as Joe Biden and Maya Rudolph as Kamala Harris.

Standing in front of an intergalactic green screen as if she was floating in space, she held a crystal vaginal "yoni egg," which she said she'd use to capture Donald Trump's soul and win the election. She then said "good morning" in Williamson's syrupy drawl, before floating away.

Despite her role on SNL and her viral successes, Fineman is still taking Groundlings courses when she can. She was juggling a virtual one-man show class taught by comedian Drew Droege — known for his own viral impressions of Chloe Sevigny — the same week she filmed SNL's quarantine finale.

"People are like, 'why would you do that? Don't do that," she says of continuing her education.

Fineman, however, says she'll keep taking classes, despite getting her dream job.

"There's still a learning curve for me."