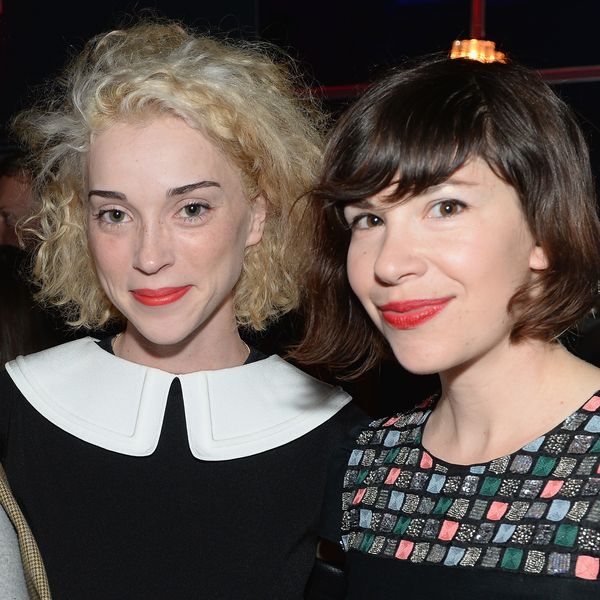 St. Vincent and Carrie Brownstein Are Making a Movie

Rock gods Annie Clark and Carrie Brownstein are apparently spending a ton of time together, which is one of the most pleasing images to ever flit through my brain.

We heard back in January that St. Vincent is producing Brownstein's punk band Sleater-Kinney's new album (the band's first since 2015's incredible No Cities To Love, and St. Vincent's first work since Masseduction plus it's piano redux album). But outside the music world, they'll also be applying their combined brilliance to a comedy tour film, reports Collider. In the film, which is yet untitled, Clark and Brownstein will play "heightened versions of themselves as they interact with assistants, bandmates, music journalists and, of course, fans."

It won't shock you, but in case you didn't know, both artists are really fucking funny. Please refer to any episode from Portlandia's eight seasons, or the satirical promo that Vincent did for Masseduction which... oh yeah, was scripted by Carrie Brownstein!

Brownstein scripted a spoof interview for Clark in 2017. In a series of clips posted to Insta, St. Vincent plays a parody of an eccentric avant-garde rock star for an absolute send-up of a bad "women in music" Q&A.

So, we know they have great energy and a lot of shared subject matter (when it comes to the indignities of being women in music which, as parodied in the promo, currently include being forced to cough up a tear-jerking answer to what it's like to be a woman in music) to tackle together. They've also worked together during Clark's several guest appearances on Portlandia, and Brownstein and Fred Armisen directed the video for Clark's 2010 "Laughing With A Mouth Full of Blood."

It seems like Clark will more or less revisit the character she and Brownstein created for the goofy interview. The quirks of Brownstein's self-parody will be more of a mystery, though it seems like a good bet that a caricature of a middle-aged feminist icon and riot grrl rocker will have something in common with her Portlandia persona. However, the film is emphasizing that the project "isn't a 'mockumentary,'" but rather "a scripted film that was to have been shot like a documentary" ...which sounds a lot like the definition of a mockumentary, but okay!

Whatever genre you slap it with, there's tons of comedic talent involved. Brownstein will produce and star in the film, as well as Jett Steiger and Lana Kim, the production pair between 2017 Super Dark Times. Bill Benz, of Portlandia and The Kroll Show will direct. It also won't be St. Vincent's cinema debut: she's currently directing a version of The Picture of Dorian Grey, and previously directed a short film "Birthday Party" as a part of the XX horror anthology.

To prepare yourself for this imminent greatness, enjoy more of fake-St. Vincent's answers to questions like "what have you been reading lately?" and the advice she'd give to young musicians today.