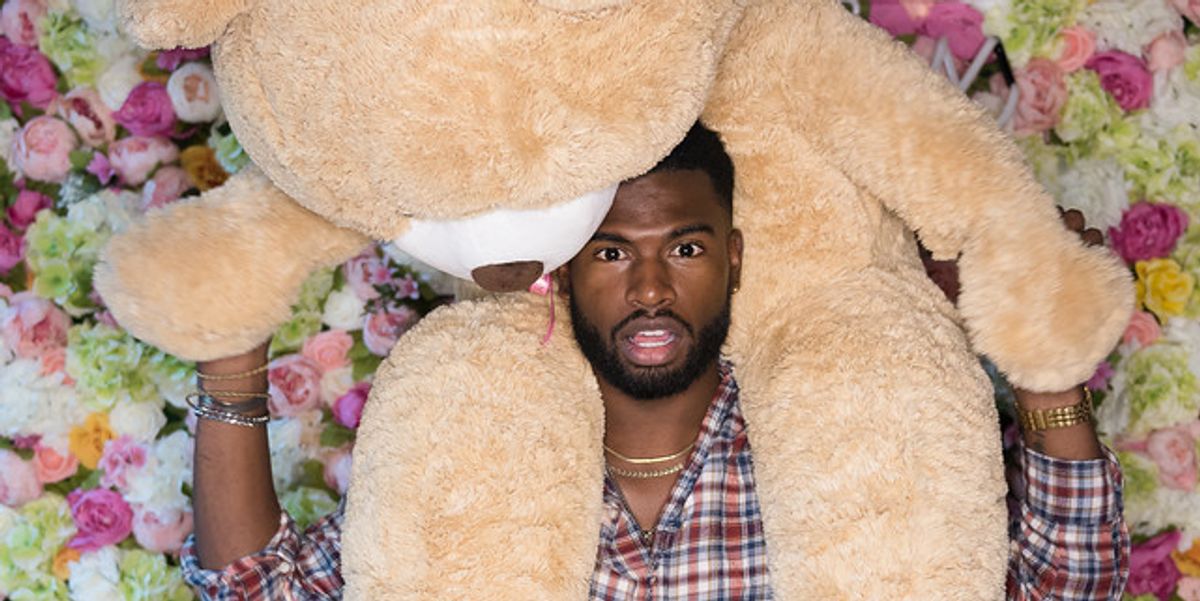 Thankfully, gone are the days of models being seen and not heard. This has been no easy feat. It's taken an uprising of sorts: models detailing their unfair working conditions in the industry, models embracing other fields and, primarily, models dominating social media. Broderick Hunter's career took off prior to Instagram's enormous influence on the industry, and consequently he taught himself to shine without the sheen of a million-strong online fanbase, proving he's so much more than a pretty face.

Nevertheless, he has a face many are familiar with. Discovered after a chance shoot with a photographer friend blew up on Facebook, you might recognize Hunter via the pages of Vogue, as Ciara's love interest in "Sorry," or Issa Rae's very rude Tinder date on Insecure, from the subway, his YouTube grooming tutorials, the many, many listicles about hot guys you need to be made aware of. Despite his success, Hunter remembers when his agency threatened to drop him if he continued to curate his brand outside of the fashion industry and share his life online — a laughable concept in 2018. Hunter intends to keep expanding his professional hyphens, but first and foremost, he will not settle for anything less than a platform to showcase his personality.

Of course, with the white hot spotlight on the fashion and film's treatment of those in front of the camera, now has never been a better time for someone operating in those spheres to make their voice heard — and Hunter is not about to step away from the mic anytime soon. In conversation with PAPER, he weighs in on male models' recent sexual assault allegations, fashion's potentially problematic relationship with social media and the downfalls of fame.

How do you feel you evolved in fashion before expanding into film? Is that where you wanna continue to put your energy?

Of course. I mean, I'm always going to really be in touch with the fashion industry. I'm never gonna leave that, especially because it's been the base of who I am today. So taking my time into the modeling industry... with modeling it was just more so just finding out where I wanted to go regarding my brand and how I wanted to present myself.

How do you feel that you've done that? How would you describe your brand?

Well, at that time there wasn't a lot of models that were creating YouTube channels, and I was one of the first guys, and the first black guys at that, that started doing men's grooming tutorials, haircuts, and skincare. People always looked at me as like, "Okay, you're good looking," or whatever the case may be. I kinda wanted to up the ante. I have a funny side to me.

You were also never really a social media model.

Never. I never really dove straight into it. If you take too many selfies and pose in too many kitchens and you're drinking too much [skinny] tea, you know what I'm saying?

That must be such an LA thing, too.

Well, it definitely is a LA thing, but I think it's just a industry thing, because now it's more so, like, how many followers do you have? How can you gain more? And it's all about numbers, numbers, numbers. You no longer have to be in a magazine or be in a campaign to be sort of a superstar. So I think that's more so why people have a little bit more respect for me, because they know that that's where I started, and they know that [social media] is not what's made me, me.

It must be frustrating for you to come from that very traditional route and now watch these people explode off social media.

Oh, yeah. I never get bitter, I just get better. I know where I came from. A lot of these people that are here now, they're not gonna have the same type of longevity. I call them "microwave celebrities" because it's so...It's just quick. They're just popping up everywhere, you know what I'm saying? Everybody's getting a little blue check now.

Yeah, they're not slow cooking in the oven.

Yeah, there's no progression, so you're not gonna know how to maintain anything. I get more pleasure knowing that I worked and strived for my status.

At the same time social media has really democratized fashion. Similar to musicians or rappers like SoundCloud. Agents and A&Rs, they're behind now. The masses are finding these people first.

Yeah, well because the thing about it is with social media, everything's easily accessible now. You can talk to your favorite celebrity, if you're lucky. That wasn't existing back when I was growing up. Now, you can keep up with any and everybody. I can open my phone and find out what Rihanna's up to.

I wonder if that's kind of made things easier for celebrities, in knowing what Rihanna ate yesterday, maybe it's humanizing them.

I get what you're saying, but I think it's really all about what you put out there. As myself with being an influencer, celebrity, or whatever, I'm just very careful about what I put out. I could be dating somebody right now, and if I don't post about it, nobody knows about it. I give people just a little bit, not a lot, just a little bit to keep them biting. You just kind of always gotta keep everything in a moving motion, to keep you gears oiled.

Well, you're also in two of the industries now where so much is in motion. Fashion and film and television, it's crazy. With the whole Me Too movement and Time's Up, on top of the diversity struggle. Have you felt tokenized?

I totally feel that. I totally get exactly how people feel that, because we all have different experiences when it comes down to that. Me personally, I've seen and been through all of that. I've also lost a lot of opportunities just because of my sexuality, I'm straight.

So the Testino and Weber thing didn't surprise you at all?

In the industry in general, that kinda stuff just happens. It's just the industry that we're in. So it's nothing surprising to me, but I do feel like you do have the control to say no. You don't have to do all that stuff, I know I didn't. All of us have been tried in some way, shape, or form in the industry.

Oh, yeah. Oh, yes, of course. 'Cause back before the social media, the only way you really could say something was like, he said, she said.

Do you think it will change?

But it was interesting these two photographers that were so prevalent, to watch them be taken down really sends a message that no one's safe.

I've had the opportunity to shoot with Bruce Weber, and I've had the time to meet Mr. Testino. They've all treated me with love and respect and everything. I don't know what happened with any of those other guys, but as I said, it's the industry as a whole that's pivoted into these type of things that are happening. The fact that those guys are at the top of the game, and they're basically the kings, I think people were kinda shook.

It's the power that they wield that makes these young men feel coerced. Did you ever worry about being blacklisted?

Yeah. Those are the exact things that would run through my mind anytime I was in any type of situation like that. But you have to conduct yourself in a way where you can... As I said, you can easily say no, walk out.

But not everyone's as self-assured, or as strong, as you.

I think everybody has their own power in their own way. Everybody has a thing about them, but I think people are so scared to tap into that. My agency, when I started making my YouTube videos, were asking like, "What are you doing?" They're so used to guys doing what they're told. I was one of the first guys that actually was saying stuff and making controversial statements. I feel like they were looking at it in a way where, okay, this is something we haven't seen before.

Why do you think it is that male models don't get afforded the same rights to a personality that female models do?

Male models have been trapped in their heads, thinking that they have to fit in only this type of mold. Now we've created a space where the aspect of what was a norm is no longer a norm anymore. You used to have to be 6'2" to model. Now guys are 5'10", 5'9", stuff like that. It's expanded, we're expanding now.

Also it seems as though nepotism has never been more prevalent than right now.

No, no, you're totally right. But that nepotism, the cosigner having a famous or successful parent is really really strong these days, because thanks to social media, now you don't have to build that profile. You're offspring of fame.

Do you get recognized? Can you live normally?

Yeah, I get recognized a lot, yeah. You know, people that want to follow me around for three blocks or something like that. Everybody's shooting their shot these days.

Oh yeah, I do get in trouble from time to time, people having misunderstandings, especially on Twitter. I'm known for hyping Black women a lot. And then somebody wants to say "Oh, so you're a racist, you don't like white girls", I'm like "I love all women personally. I love all women".

Did you experience racism early on in fashion?

Oh yeah. It's very racist. I've been pulled from top tier shows because they wanted to use a white person. It's happened so many times in my career, and that's one of the reasons why I branched away from runway. Not to mention these stick figure guys. I would have to really starve myself to get to that size and that's something I wasn't comfortable with. I'm not gonna jeopardize myself over 15 seconds on a runway that's gonna be here and gone.

And not even a job that's going to sustain you. The exposure's not even the same anymore. Back then, when I started, yeah, you had to be on the runway show in order for people to know who you are. That used to matter. Now, a runway show is about as relevant to models as a selfie. People say "Dude, why'd you leave fashion?" First of all, I never really left fashion. I just transitioned. I took time transitioning.

Yeah, physically and mentally. You can make yourself a star in your own way. When social media became relevant thing, I was like "Damn, this is my opportunity to show people what the hell I got."

Now I'm just Broderick Hunter. You know, I can do it all.