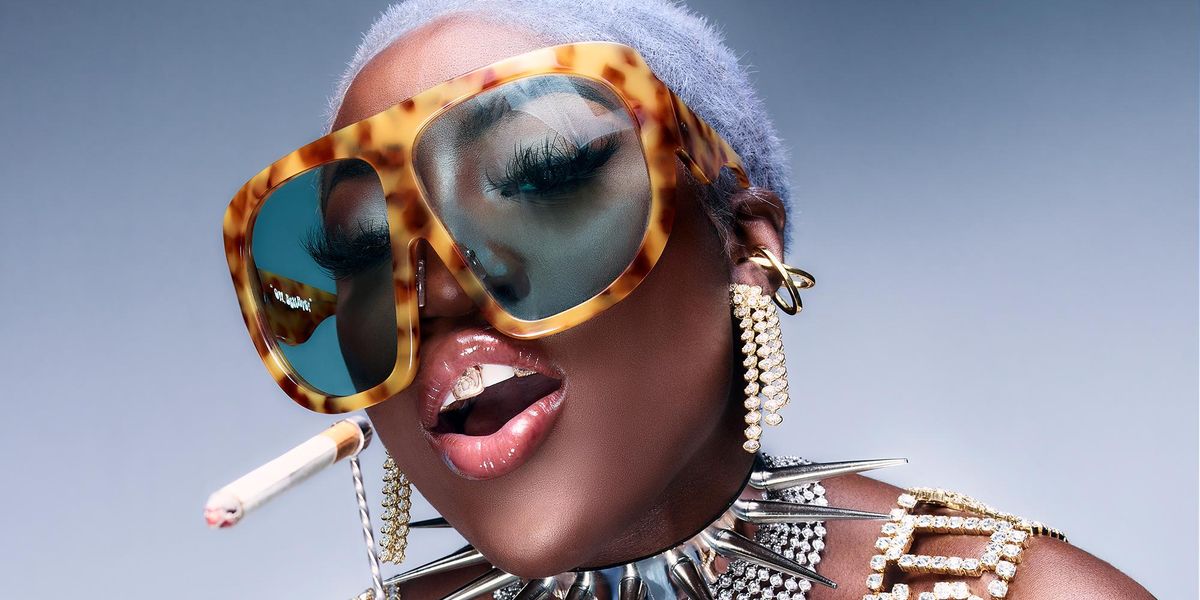 When Bree Runway signed to EMI in 2018, she presented the execs there with a pitch deck. "I showed them exactly who Bree Runway is, because I'm meticulous," she recalls.

That's not an overstatement. In a now-deleted video posted to her Instagram account, the young Londoner was seen strutting into the EMI offices as if she owned the place, draped in a street-style, high fashion concoction, looking the part.

Three years, an acclaimed mixtape and EP later, it's all happening as the deck predicted. Brenda Wireko Mensah has become a star. A Black princess pop star, not a rapper, as she clarified on Twitter last summer and reiterates to me over Zoom. "A pop star is someone who can touch on any genre, a pop star is anyone who can bend, morph and twist into anything they want at any time, that's a pop star," she asserts, paraphrasing from a dictionary definition she's pulled up on her phone. "It's beyond the music, it's a lifestyle."

Together, we use Rihanna as a case-study. "Rihanna is a pop star," Runway affirms. So is Beyoncé. Both women have set the standard for what the next generation of Black women musicians can achieve, despite persistent racial barriers. Runway isn't alone in asking that she be considered a multi-faceted artist. Just last week, Coi Leray tweeted the same request. And given how marked her music is by genre (from reggae to trap to pure pop), lyrical (hear her flow across the subdued 808s on "Designer Hooker") and vocal (she switches from hooks to husky growls with ease) experimentation, Runway has every right to demand better treatment from fans and the press.

Born in Hackney to Ghanaian parents in 1992, Mensah recorded all of her breakout music in a DIY bedroom studio, experimenting with different sounds throughout high school and developing into the multi-armed artist she is today. Her popularity has dovetailed with louder conversations about Black representation in British pop music, as described by Little Mix's Leigh-Anne Pinnock, the Sugababes' Keisha Buchanan, and other Black British pop stars in the new BBC Three documentary Race, Pop and Power. And from the start, much of her output dealt head-on with issues of racism and colorism. The EP artwork for 2019's Be Runway literally depicts the artist as half Black, half skin-bleached white. In her music videos, Runway makes a point of prioritizing the representation of darker-skinned Black women, frequently referencing the '90s and early 2000s video-vixen era (Pharrell's "Frontin," Foxy Brown and Total's "I Can't") which, while imperfect, tended to showcase a wider array of skin tones.

But while she's spoken and written lyrics about her experiences with colorism growing up, when she's working, race never feels like an issue. Mainly because she won't let it be. "To be honest with you, I haven't felt anything [to do with race]," she states. "I feel like I stepped into this with this kind of message, and this kind of strong thought from the beginning. So everyone knows with Bree Runway, that's what you're getting with her. They know that she can't really be molded when it comes to race or the types of women that I choose to represent."

That's not to say she isn't shocked to have this power in the first place: "My position that I have in music right now, according to society, it's not even meant to go this well for me."

By the time the 20s dawned, Bree Runway had fully mastered her talent for visual symbols. With 2000AND4EVA lead single "APESHIT," she bulldozed into the new decade with a music video that earned her the label "Missy Elliott's daughter" and eventually led to a co-sign and collaboration with the American hip-hop titan on Runway's single "ATM."

"I was obviously channeling her," Runway recalls. "But to have her wish me well? I was like 'What the hell?!'" The call from her A&R came late at night. "He told me to get up because Missy wanted to collaborate. I said, 'Let's send her "ATM"' because if she liked the song, she would be the missing piece to it. She came back instantly and liked the song and the rest is history."

"This project is going to be a lot more honest, I feel like I'm catching up on years that I slept on by myself. I wanna scream and shout about it."

"APESHIT" also marked a turning point for Runway's choreo. She formed a bond with choreographer Kash Powell on set and theirs, like the partnerships of JaQuel Knight and Megan Thee Stallion and Sean Bankhead and Normani, has helped prop up the pandemic musical era, which was at risk of lacking visual stimuli.

"Instead of spending our lunch breaks eating, we would be putting each other onto new dance moves and doing choreography," she recalls. Powell wanted to push her, and she was ready to be pushed, pointing to scars on her feet and legs from her recent shoot with him for "HOT HOT." "He knows that nothing is too hard for Bree," she says. "I had to leave the set for a minute to cry my eyes out, then come back and do the routines better."

Over email, Powell says that the admiration is mutual. "[Bree Runway] is meticulous with her craft. From the music production, to the fashion choices, to the dedication she puts into learning my movement. I admire the way she strives for perfection in all areas."

Watching her "ATM" performance at Abbey Road Studios, released in January and beyond the theatrics of choreography, there's a translucent, lucid, je ne sais quoi that guides Bree Runway through each and every one of her moves. It's a locomoting display of ease, comfort in her soon-to-be stardom, that convinces audiences of her passion for the craft. Bree instructs me to watch Jackson's 1988 Wembley Stadium performance of "Another Part of Me" to understand what she's trying to do. "Michael Jackson is just too cool in a way that I'm just blown away by the beat that he does his head bop back to. I love performances like that, where the cool factor oozes."

"I don't do things for instant gratification. When I look back at my own work and listen to my own songs, I'm so happy with what I'm doing. I'm my own competition."

A few weeks ago, amidst the easing of COVID restrictions in London, Bree Runway left her home city for Blue Bell Hill Studios in Kent and began cultivating her next era. She's working with old favorites who helped shape her previous mixtapes and LPs, like Liohn, PC Music's Easyfun, Moon Willis and LEVi. She sought out Moon Willis and Liohn early on in her career because she knew they'd worked with Lady Gaga, Elton John and Chris Brown. "The music I like is quite niche," she explains, listing off N.E.R.D. highlights, then jumping to Good Charlotte and System of a Down. "But where I wanna take things, I am going to have to open myself up to trying new types of structures and writing styles. I've had to open myself up and listen to the boys."

Evidence of this transition can be felt across 2000AND4EVA, from "APESHIT," to "GUCCI" and "ROLLS ROYCE," in which Bree attaches herself to seamless, singular concepts, the writing punchy, compact and easy to digest. All the better for the TikTok generation. "It's not everything that I say that's great, but we will refine it and get it to that place," she says of her producer team. "Their honesty has helped me the most."

A&R veteran Jordan Jay was also instrumental in helping her jump from the EP to album mindset, a difference which she says felt "devastating" at first. "[Creating EP's] was a comfortable place for me. But this feels uncomfortable, because things get serious now."

On a recent episode of Genius's "Verified", Bree Runway spoke about introducing a ditzier character on "ATM" called "Bree Funway," who uses men for fun and cash. But for the upcoming album, she's going to take things more seriously, returning to some of the deeper sentiments shared on somber 2000AND4Eva track "4 NICOLE THEA & BABY REIGN." "I cried during one of the sessions [in Kent]," she discloses. "This project is going to be a lot more honest, I feel like I'm catching up on years that I slept on by myself. I wanna scream and shout about it."

She also sarcastically jokes about a failed romance, which the artist has chosen to spin as a positive. "They've given me more to talk about, more to write about now," she chuckles.

Runway has also enlisted British-Ghanaian super-producer Juls, influential in building the careers of Burna Boy, Mr Eazi, Kida Kudz and set to release his own debut album in coming weeks. "Sometimes you can strip a Bree Runway song back and realize, 'Wow that's mad [African],'" she laughs, clapping the beat of what sounds like her percussion-heavy latest single "HOT HOT." "Even some of the melodies I create are very influenced by highlife artists I love." She'll incorporate the euphoric rhythms of Kofi B and Daasebre Gyamenah in songs to come, and she's at pains to get it right. "For someone who lives on highlife, like before this call I was doing my hair to that, it's something that needs to be introduced on the debut album."

Kent isn't the final destination: she'll spend a month in Los Angeles this June. "The aim is to work with the best-of-the-best whilst out there," Runway says, showing the first signs of angst so far on our call. "We're taking Bree Runway international." This has been her vision since the conception of her career, performing Rihanna and 6LACK covers. She's had a steady international build-up over the past year, scoring co-signs from Kim Kardashian, Doja Cat and Cardi B to name a few. And after a flicker of doubt, I see her return to full confidence. The belief that her success, after all this hard work, is inevitable. "I'm exactly where I need to be," she tells me.

Dressed in a turquoise Christian Dior swimsuit (she's quick to show it off halfway through the interview), Bree is pure charisma and charm. She's the embodiment of the young millennial hungry for success on her own terms, tweeting to secure her goals, from the Missy Elliott collaboration to becoming a SavagexFenty ambassador.

"I still do want to walk the runway, and they know that now," she says. You might feel like Runway is driven by material gains, or the superficiality of fame, but her ultimate concern is simply herself. "I'm so impressed by my own work, like even if no one was watching, the fact that I'm happy with it makes me happy," she says with urgency, sheer career drive painted from cheek to cheek. "I don't do things for instant gratification. When I look back at my own work and listen to my own songs, I'm so happy with what I'm doing. I'm my own competition."