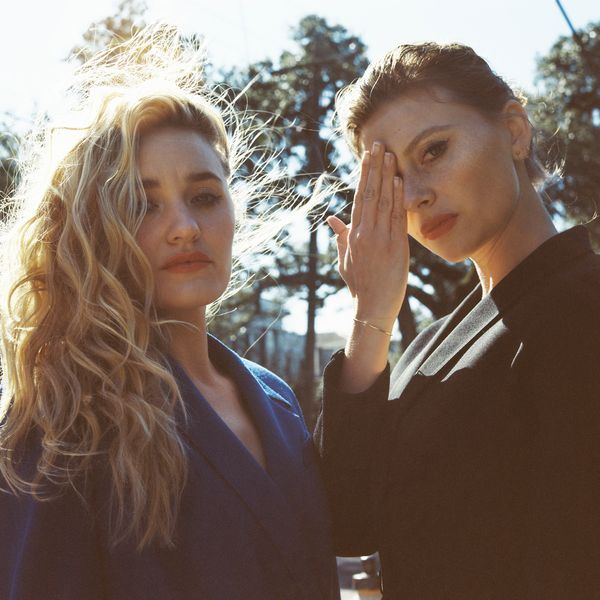 Dynamic sister duo Aly & AJ return with a brand new song heralding their upcoming EP, out later this spring. "Church" is an electro anthem about the power of forgiveness. Its ultra-clean, crisp production builds from an isolated, vocoded intro and first verse before exploding into a chorus that'll make synthpop stalwarts like Imogen Heap swoon. "I do bad things for the sake of good times," they admit. Same! "Too many nights, I justify all my casualties of love," they intone, seeking redemption. Also, same! But for real: at Aly & AJ's "Church," may we all find salvation from our recklessness.

Billie Eilish's long-awaited debut album WHEN WE ALL FALL ASLEEP, WHERE DO WE GO? is finally here, and it's so good, y'all! The production throughout is so masterful, we had a tough time picking a favorite bop from the 17-year-old's menacing, dreamlike opus. "Bad Guy" (stylized in lowercase letters) appears to be written from the perspective of one of the monsters under Eilish's bed, as it snakes into a nightmarish groove, with snappy pacing, funhouse chimes, and her smoky, demented vocal, all added for creeptastic effect.

Ciara will return with her first album in four years in May, called Beauty Marks. Today she unveils a new single, "Thinkin Bout You," and its high-def melodies and poppy rhythms may highlight a brighter, happier Ciara (its sensual video certainly does!) — but this track is all about lovelorn nostalgia. She makes sure we feel it, too. Just try getting that stick "youuuuu" refrain out of your mind. You'll be thinking about Ciara for this weekend well into the next, and then some.

Brooke Candy returns with the latest taste of her long-awaited debut album SEXORCISM. Speaking of, "Happy" is like a electro-rap exorcism of its own, as Candy cries through layers of wicked distortion (and hooks for miles) to find her own freaky rainbow. The song also acknowledges Candy's own struggles with mental health, making the track just as real as it is instantly enjoyable. Watch the moody, high-fashion music video here.

We can't enough of Saweetie's ICY album, periodt, but "My Type" really hits the spot. On the track, which is a flip of Petey Pablo's crunk classic "Freek a Leek" for a bass-driven 2019 audience, Saweetie makes her sexual and romantic demands plain — namely that he's gotta come correct in the bank and in the sack — while fending off naysayers ("Messy hoes fuckin' for the rent.). It's not just that she wants material and sexual satisfaction, which she deserves. It's that the whole thing sounds like such a blast and we're along for the ride.

Unless you live under a rock, you're aware of the winning streak of two of Latin music's biggest artists, Rosalía and J Balvin. So what could be better? Over a traditional reggaeton playero beat, with an assist from El Guincho, the two stars face off in a playful back-and-forth, representing the best of their sharp musical styles and talents. "Con Altura" translates roughly in Spanish to "with altitude, or highness." This song only serves to elevate both stars to the fourth dimension.

King Combs, son of Diddy, drops his latest project Cyncerely, C3 today. One track in particular is sure to set tongues wagging, perhaps even literally. Over raucous, Miami bass beats, the fun-loving City Girls steal the show in "Surf," anchoring the hook in a pussy-powered metaphor so potent, you'd be foolish to drift away to another song anytime soon. Smash that repeat button (or a wall, or wherever you throw your body when you're ready to go off).

Keeping the pace going is Melii, who is definitely not here to play games. PhAses is out today and Melii knows what she has to offer, case in point: album highlight "Copy," featuring Odalys. The song boasts stormy, bass-heavy production designed to induce a permanent fuck-your-feelings MO. It's working on me, how 'bout you?.

Rising pop artist Alex Aiono releases their latest bop, the lovelorn "Her." Aiono turns in a smooth vocal set to crisp, pulsating synths singing about drifting back to a former love, only to find his affection isn't mutual. Somehow the sadness of that feels sweet, here, which is a testament to Aiono's top-notch songwriting, and maybe some distance from pain? We hope?

Related | Alex Aiono Is Tired of Your Drama

AlunaGeorge's Champagne Eyes dropped last year, but its steamy Bryson Tiller collaboration has even even steamier video, out today. Marrying the song's concepts of raw sexual expression with NSFW visuals, Aluna spins "Cold Blooded Creatures" from a self-indictment to a celebration of how a one-night stand can transform the ways we see ourselves and potential future partners. Watch it here, and revisit the twisty, throbbing R&B track, above.