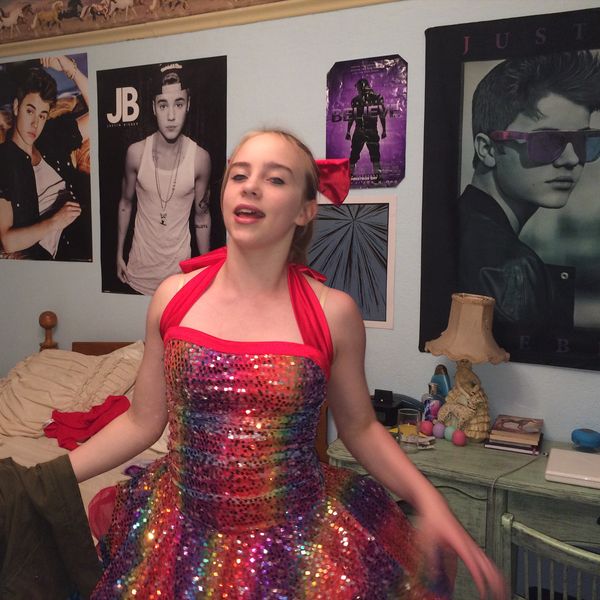 The greedy stans who leaked it may have seen it coming, but guess what? It's here. Billie Eilish recruited Justin Bieber to remix her biggest hit to date, the infectious bumper, "Bad Guy."

Those expecting something subpar will be sadly mistaken, as Eilish has delivered yet again, incubating the perfect storm of viral-ness for the release of the new track. As it's been reported since the beginning of Eilish's career, she has always been a huge fan of Bieber. In April, the duo finally met at Coachella, and leave it to the gloomy ingenue of pop stardom to waste no time in getting Bieber to collaborate on her Billboard-climbing hit. Oh, and the cover art for the remix? Eilish is in her childhood bedroom, sporting a Claire's-ready rainbow sequin dress in front of a cult-level shrine of pop's most infamous bad boy, Bieber himself. Talk about #BreakTheInternet.

"Bad Guy" remains intact in terms of its original iteration — none of its now-infamous swerves, bangs, or bristles are neglected, which will surely please fans of Eilish's. The only addition is an effortlessly cool verse from the Biebs. He's certainly not out to innovate the game on his verse, but there's something to be said for the simplicity of his bars, matching Eilish's pace with his classic swagger.

"Bad Guy" currently sits at number two on the Billboard Hot 100, and has been climbing since the release of her debut album, When We All Fall Asleep, Where Do We Go? At number one is Lil Nas X's "Old Town Road" remix with Billy Ray Cyrus, where it's been for a record-breaking 14 weeks. It's likely that thee sole star power festering on the new "Bad Guy" remix will be enough to knock "Old Town Road" clean off to number two. Smart move, Eilish. Smart move indeed.