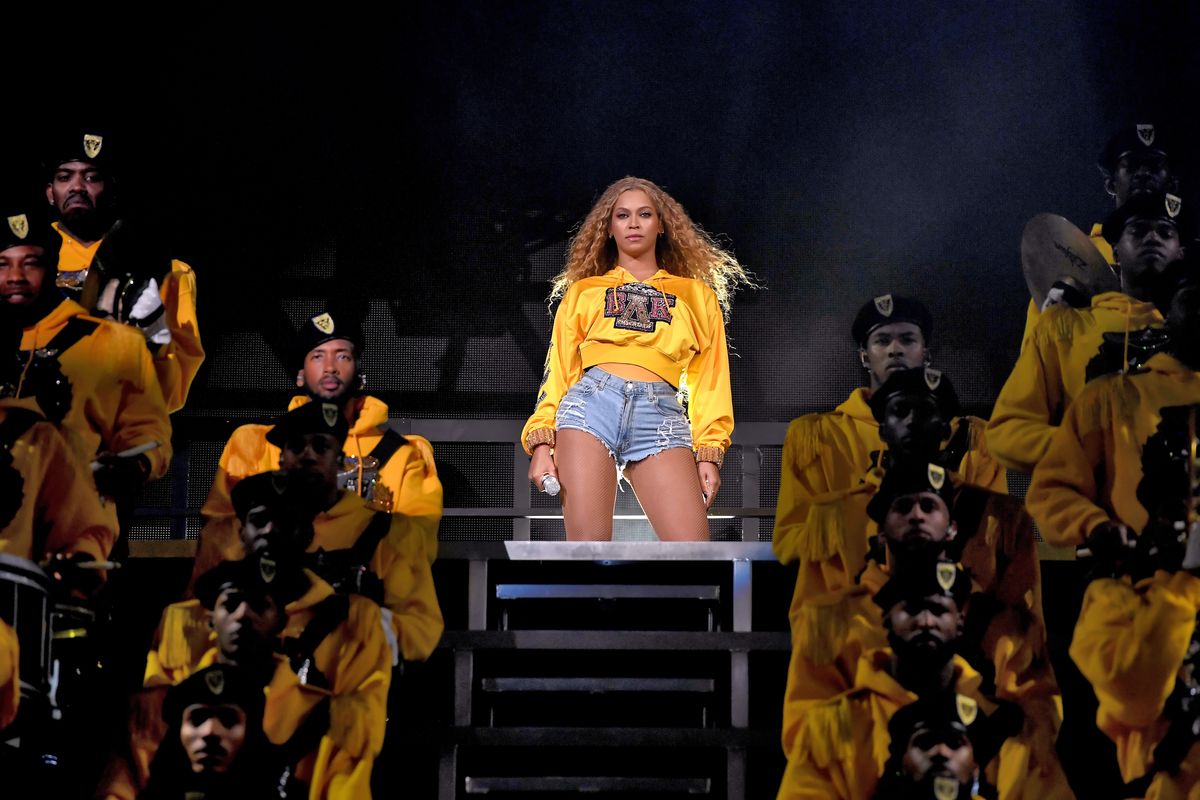 Beyoncé Pulled All the Stops for Coachella

From all those live-streaming and watching #Couchella to the live crowd at actual Coachella, everyone was S C R E A M I N G. Bey is back, and in a big way. Marching band à la Drumline (2002) and all.

The theme was "Beyoncé Homecoming 2018," and boy did she bring it on home! Queen Bey started with nothing less than a royal entrance, with a fierce female drummer doing the roll before she appears in her majorette outfit and sashays down the runway with her glistening cape.

After opening with "Crazy In Love" and "Freedom" in her Beta Alpha Kappa hoodie, Bey made sure to add something to her setlist that made a political point. She emphasized her being the first black woman in history to headline Coachella by covering James Weldon Johnson's "Lift Every Voice and Sing."

And (who could forget??), after giving us a little taste of "Irreplaceable" and performing "Diva," there was that glorious dance break.

obviously we've all seen this dance break 100 times but.. there was extra extra sauce on it this time pic.twitter.com/NMITZJW4zf
— joggers (@brokenpromithes) April 15, 2018

While Beyoncé is a powerful performer by herself, a little back-up never hurt anyone. For some major throwback vibes, she brought her king Jay-Z onstage for "Déjà Vu," and made Destiny's Child reunion 2.0 possible with shimmering camo and tracks "Lose My Breath," "Say My Name" and "Soldier."

Solange was also there for the occasion, a little reminder of their surprise sister stage-sharing moment in Coachella 2014.

In honor of Coachella being this weekend, let's remember when Beyoncé surprised Solange on stage. I love their relationship. pic.twitter.com/b7AKSA1WuP
— c (@chuzzuz) April 13, 2018

#Beychella was everything we dreamed it would be. And with a great roster of black artists and entertainers behind her, and performing between numbers, it was so much more.

There was confetti. There were fireworks. There were too many great moments to capture in a single post, so we're letting Twitter reactions tell you the rest:

The greatest living entertainer is a Black woman named Beyonce. This is not up for debate.#Beychella
— Amanda Parris (@amanda_parris) April 15, 2018

At this point, if you disagree that Beyoncé is the greatest performer alive, there's hateration where your heart used to be. This should be undisputed. #Beychella pic.twitter.com/4mGNfZ8ckb
— Awesomely Luvvie (@Luvvie) April 15, 2018

I can't believe Beyoncé really fit my whole HBCU experience into a 2 hour Coachella performance.. Think about it 🤔

A Probate
A Step show
A Half time performance
A Coronation
A Convocation
A Homecoming reunion
And most importantly Black Pride 😍😫👸🏽 #Beychella
— HBCU Confessions (@HBCUfessions) April 15, 2018