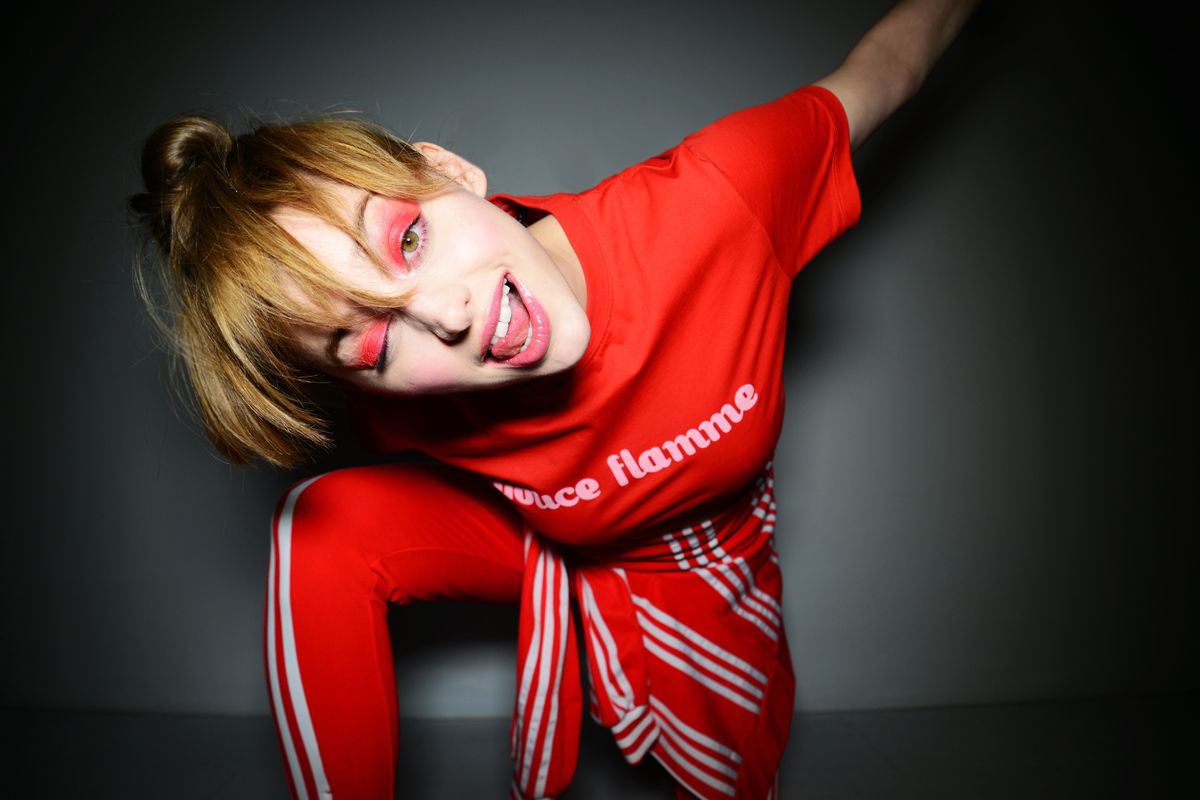 When artists get together in the studio for the first time, the session can typically go one of two ways. It can either be a major waste of time — with a clear lack of musical chemistry or, even worse, disastrous creative clashing between artists — or result in something fresh and exciting for everyone involved. But when Montreal dance-pop phenom Betta Lemme met up with pop singer-songwriter extraordinaire Jesse Saint John (Britney Spears, Kim Petras) and production wiz Danny L Harle (Charli XCX, PC Music) in Los Angeles, their rendezvous was nothing short of a studio play date. Literally.

"Play," the result of Harle's sonic sugar, Saint John's lyrical spice, and Lemme's vocal everything nice — compounded by the trio's undeniable musical chemistry; their own Chemical X, if you will — is a banger in every sense of the word. Premiering exclusively via PAPER, the '90s and early 2000s inspired dance track sounds like the sexy, sinister lovechild of the Vengaboys, Britney Spears, and Benny Benassi. It's the "kind of music I want to hear, to be quite fucking honest," Harle quips. But the thumping party anthem is much more multilayered than its irreverent club-friendly energy might suggest. As the trilingual singer explains, the song is rooted in our inherent desire to make human connections with each other, whether on the dance floor or elsewhere.

"I know emo is coming back hard, but I'd rather dance and cry than just cry," Lemme shares. "The world is in peril. People are forgetting how to genuinely connect with each other. With 'Play,' I pictured how nice it would be, as a lonely kid, for someone to reach out at a party and include me. I'm shy and usually keep my back against the wall at a party. I know deep down that if I just had the courage to go on the dance floor or ask a friend to hang out, it would transform my day. Imagine if the world displayed more of this inclusive behavior — the happiness would be contagious."

That rose-hued sentiment colors the joyful music video for "Play," which sees Lemme let loose '90s fisheye lens-style while her frenzied on-screen antics inspire a group of initially passive viewers to let their freak flags fly, too. (One of those viewers? Enigmatic viral YouTube phenom and feather boa enthusiast, Emilia Fart). Ironically, it turns out Lemme needed a little coaxing to come out of her own comfort zone in the studio, a challenge Saint John reveled in.

"That was my favorite part," he reveals about working with Lemme, noting Aqua and DJ Sammy as influences for "Play." "I'm all about working with artists to get the most out of them and make them comfortable enough to get something they didn't even know they wanted. I'm so hot our freaky baby is being born!" His philosophy? "Go as far as you can. We can always take it back, but we can't go back and make it wilder."

Below, Betta Lemme opens up about her love of '90s and early 2000s pop, working with Danny L Harle and Jesse Saint John, and why Britney Spears remains a strong influence over her music.

When you first got together with Danny and Jesse, what vision did you share for the type of song you wanted to make?

I played weird old French and Italian music. I also talked about my obsession with the Vengaboys and Aqua and how everyone made fun of that music. People used to call that music gimmicky or plastic or a joke, but the joke's on them because at the end of the day, everyone is still dancing to those songs and it makes them feel good regardless of how people judge them. I wanted to come up with a song that had a similar quirky feeling to it but a little more like Britney; a little more cheeky, a little more shy, a little less synthetic.

How do you typically approach studio sessions?

Doing sessions is like speed dating. You walk into a room and you don't always know who you're going to be with. I'm not a big fan of sessions. I understand how they can be important because you can always meet someone and make a new friend, but I'm really, really particular and not everyone wants to make the kind of music that I want to make. [For this song], I wanted to feel like I was a little kid again, like when I first heard the Aquarium album or when I saw the Vengaboys on MuchMusic for the first time.

Danny has really helped influence the sound of pop's current wave. What was it like working with him?

I've been a fan of Danny for many years now, watching the underground scene that he's been involved in with artists like SOPHIE and Charli XCX. I love that experimental pop sound, but wanted to make something a bit more orchestral and layered. Anyway, Danny came in with this nasty bass and I didn't have to say much because we were very much on the same page. He just wants to jam and have a hardcore dance party. At one point, he FaceTimed me at like five in the morning to work on the song while he was in London and I was in Montreal. I love that he's easygoing — usually a producer wants to just produce [the whole song] but I like to co-produce all of my songs, so being able to give the song back and forth was my favorite.

"Everyone made fun of [Vengaboys and Aqua]. People used to call that music gimmicky, but the joke's on them because everyone is still dancing to those songs."

Jesse is an incredibly in-demand songwriter. What did he bring to the table?

Jesse wants to push you: "Girl, be you, be your naughty self!" Honestly, I'm quite shy and very private with anyone that I like, so having him egg me on was like, "Okay, I want to play now! I want to play with Jesse!" His spirit made me feel a little more playful and able to sing about feeling that way. Also, he's such a sweetheart and he has these really soft moments. He just lets you be you. In our session, he was talking about all these parties and I was like, "I don't usually go to parties, I'm so shy. Except sometimes if I see someone [I like] I'll think, 'Maybe I'll get a little naughty..." I kid you not, we wrote the song in like seven minutes. It was the easiest fun.

You released your debut single "Bambola" in 2017 and it became an international breakout hit. How has your music evolved since then?

It's been crazy because the first year I had to sort through some things and I wasn't able to release any music for almost a year after that first single did really well. So now I have all of these songs in my back pocket and people are like, "What kind of music is she making? Is it pop? Is it dance? Is it alternative?" If you put 10 of my songs on the table they all start to make sense together. If you think of the late '90s and early 2000s — like Gwen Stefani, Eve and Missy Elliott — there's so much rock, so much R&B, so much dance music that all meshes together.

What's your relationship with Britney Spears' music? You reference her quite a bit.

It's not necessarily her specifically, but more the essence of what she represents. When I was younger, some of my friends came out to their parents and Britney was their safe place to make them feel fabulous and unstoppable. That energy of being strong even when you're sad or gentle, that's the essence of Britney Spears. I relate to that.

"That energy of being strong even when you're sad or gentle, that's the essence of Britney Spears. I relate to that."

I was really shy as a teenager. One of my best friends got me into Britney Spears and her music helped me come out of my shell. We would literally go to the mall and stand outside singing Britney songs at the top of our lungs.

Do you remember which ones?

We would sing "I Love Rock and Roll" and "Toxic."

Oh my God, "Toxic!" Every time I'm on a plane and I have to walk down to the washroom I pretend I'm holding a cart and I do her runway walk. [Begins singing, "With a taste of your lips, I'm on a ride..."]

I think everyone should live like they're in the "Toxic" video. So, when you do go to a party or event, how do you deal with social anxiety and feeling shy?

I don't know if this is a proactive response but I usually just don't go. [Laughs] I like to go with a friend, I like to find someone in the room who seems uncomfortable and just ask them how they are. Part of "Play" is about reaching out to someone to ask them how they are, ask them if they want to play, because the problem nowadays is that we aren't speaking and we are not relating to each other. Everyone feels lonely but no one says it and I hate that so much because it amplified your loneliness. People feel sad sometimes and we need to talk about that.

Your music is very upbeat, but there's also a darkness to it — something a little sinister, if you will. Where does that spring from?

I think that's probably a result of an inner dialogue. There is dark side sometimes. But I always try to find the joke in everything, because for the most part I don't want to let [the dark side] take over the happiness. I also have some songs that sound really, really happy but they're not at all. There's one song that sounds like it's about falling in love with someone but it's actually about a stalker who was sending death threats to me for six months.

"I always try to find the joke in everything, because for the most part I don't want to let [the dark side] take over the happiness."

That happened to you?

Oh yes, 100%. It's insane! You'll hear it on the next EP. But there is definitely a dark side, which is why I push for the happy music so much.

It's reflective of the human condition, isn't it? You need a little darkness to balance the light and vice versa.

There are so many different dimensions to the music. When I recorded "Give It," I was super emo. I had a crush on someone I should not have had a crush on. The studio I was working in was an old repurposed bomb shelter, an underground bunker. It gave the song a really weird, creepy vibe. But "Play" was the total opposite. We were in a happy studio that looks like a library, just having fun with it.

What sort of energy did you want to capture with "Play"?

When I showed the song to a friend of mine, he said, "This sounds like the really naughty kid in the back of the Vengabus." [Laughs] I picture opening the doors at the club from A Night at the Roxbury and seeing my grandmother in the center of the room on a table surrounded by beautiful, glittery men. I hope that when people listen to "Play," they let go of inhibitions and social anxieties and just have fun with themselves and each other.