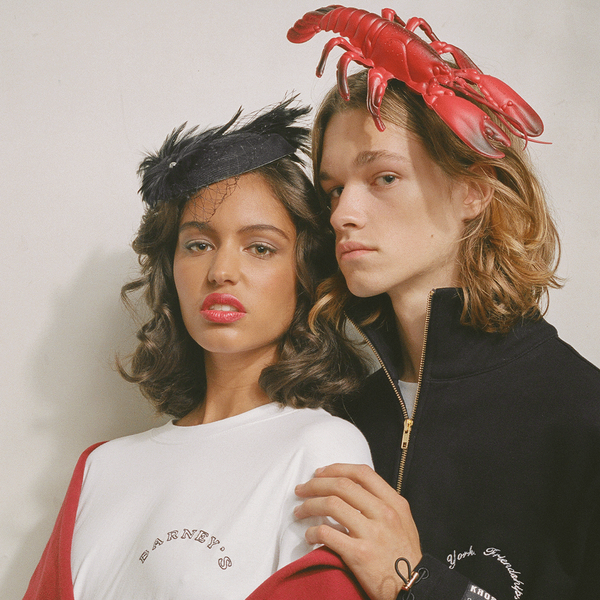 Since being acquired by Authentic Brands Group a year ago, many people have been waiting see what would unfold next for Barneys New York, the iconic department store that served as a fashion institution for decades.

Now, after staying off the grid for most of 2020, Barneys is officially back with its first move under new ownership, launching a new capsule collection with streetwear brand Krost. (Its plans to relaunch inside Saks Fifth Avenue stores have been pushed back to next year due to COVID-19.)

"Barneys New York is where I first discovered my love for fashion and apparel," said Krost's founder, Samuel Krost, in a statement. "As a New York-based brand, it's truly a privilege to be collaborating with an iconic New York institution like Barneys."

The accompanying campaign references the store's famous '90s ads taken by Steven Meisel. Beneath vintage filters, models build a structure from playing cards, pose on an industrial ladder, and don quirky fascinators against a minimalist white backdrop. With taglines like "Creativity means taking a chance now and then," and "Thought should be lofty, thought should be deep," they're reminiscent of similar vintage ads starring Christy Turlington and Linda Evangelista.

The collection is equally minimalist — white T-shirts, as well as yellow and red crewneck sweatshirts, are printed with a heritage Barneys logo — while sporty items like black joggers, track pants and baseball caps are a nod to Krost's sleek streetwear roots.

Barneys New York x Krost is also partnering with nonprofits The Food Bank for New York City and One Warm Coat to provide coats and meals for those in need during this pandemic-stricken holiday season. You can give back — and start your holiday shopping early — when the collection drops on Krost's and Basic.Space's websites, as well as Barneys Japan and Selfridges London.