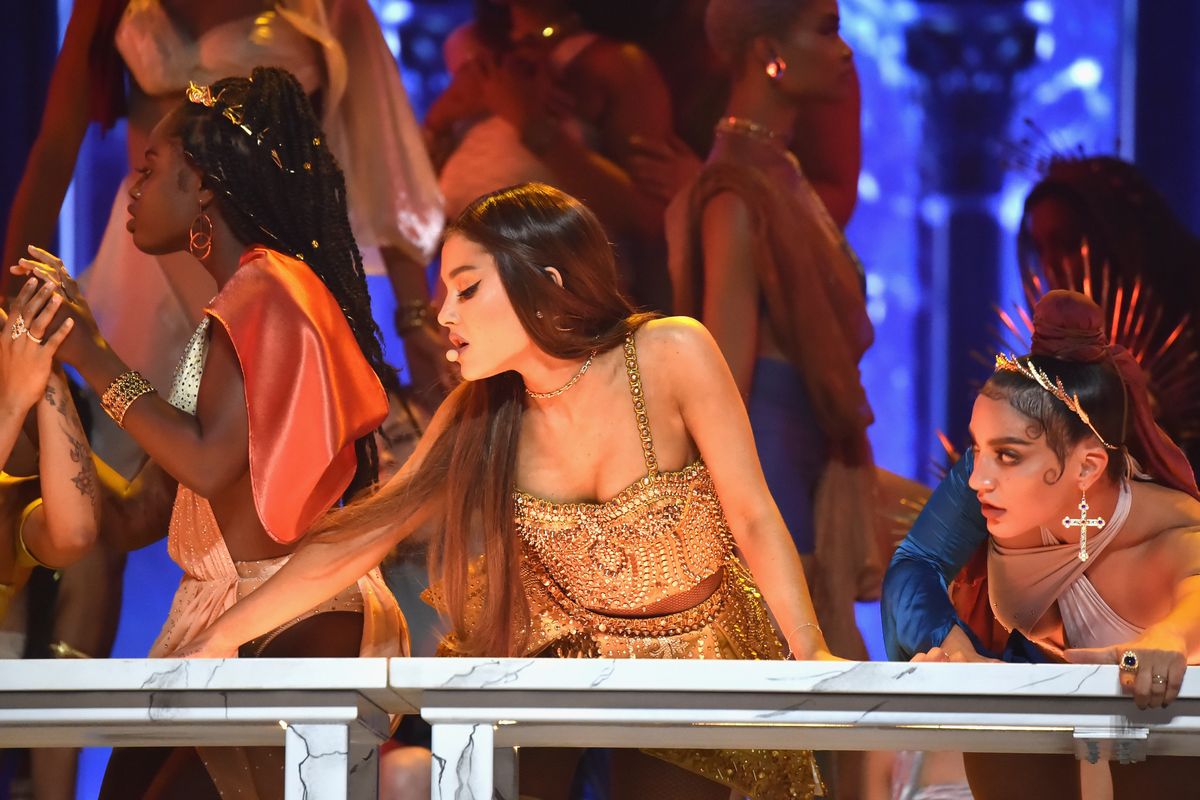 Last night, Ariana Grande delivered a glittering, decadent performance of her Sweetener single, "God Is a Woman." The set, choreography, and costumes were directly inspired by Leonardo da Vinci's 15th century painting The Last Supper, with a twist: Grande's apostles were all women. We, and the VMAs-viewing public at large, were very into it. Catholic art always provides a rich font of inspiration for pop stars — just ask noted Aretha Franklin fan Madonna, who conceived of this particular canon.

Related | Why Weren't There More Women Performing At The VMAs?

For deeper insight into Grande's act, we reached out to Chloe Esslemont, one of the brilliant minds behind Tabloid Art History. Esslemont specializes in finding allusions to art history in present-day pop culture imagery, and so she "loved [the] performance from first sight."

"The references [Grande] is invoking go flawlessly well with the subject matter of her song, updating our idea of who and what specific Holy figures look like," Esslemont told PAPER. "I also liked that she kind of stepped back and didn't take on the more obvious Jesus role for herself — the dancer who did portray that role was really fantastic."

And when it comes to less obvious references, Esslemont pointed out that midway through "God Is a woman," there's a notable shift in the way that the dancers move; that they transition from a stiffer stance while depicting "The Last Supper," to "more languorous-esque, dramatic, intertwined poses" that recall depictions of Jesus descending from the cross.

Audiences also responded to Grande's choice to eliminate men from the equation, to feature women as the 12 disciples. It represents a simple change in perspective, shifting the way we see women depicted in religious art.

"I think it's always interesting to consider our historical biases," Esslemont said. "And by unabashedly depicting God and Her followers as a variety of women, I feel Ariana is creating an interesting depiction of womanhood, holiness, and widening the intersection of the two within existing depictions from the Christian tradition."

So does Esslemont think Da Vinci would have enjoyed the performance? "I hope he would have!" she said. "And even if he wouldn't have, plenty of the rest of us did!"