Amanda Googe Explores the Alien Hidden Inside All of Us

Aliens are landing in the City of Angels. New York-based artist and runway model Amanda Googe will be showing portraits at the W Los Angeles next week from her new series, "My Aliens," in which she's turned her and her loved ones' feelings of alienation into celestial, larger than life art works. The twelve 36x48" pieces each feature a lone extraterrestrial giantess traversing across geometric landscapes.

PAPER caught up with Amanda to discuss the intersection of fashion and art, her favorite new fashion collection, and why being a model often feels to her like the intergalactic space travel she renders in her art.

What is the inspiration for this show?

I called the show "My Aliens" because I like to think of [these portraits] as a celebration of the alien in each of us. They are big, graphic, colorful, and fun, but they also have a somber, almost detached mood. 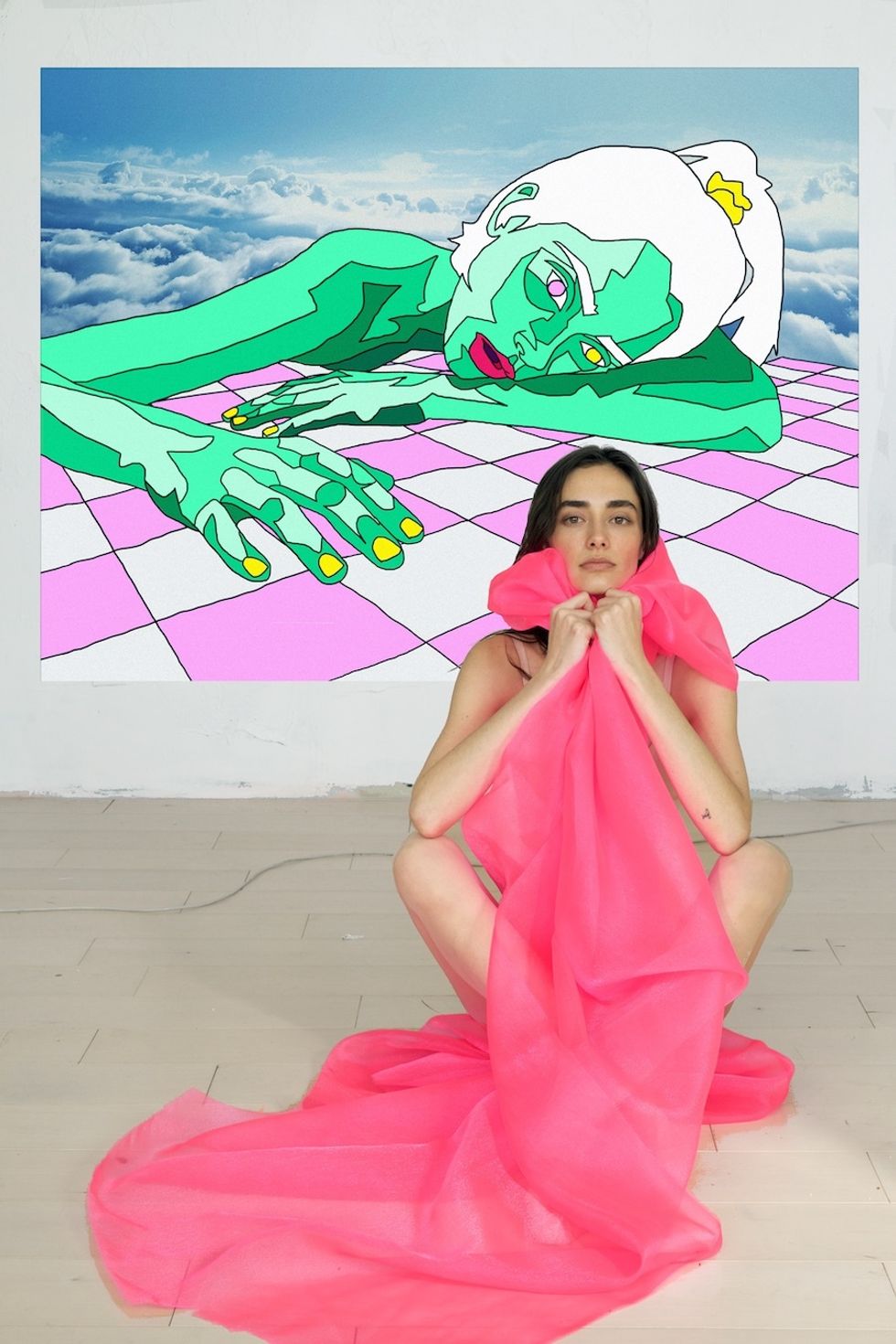 How has fashion influenced your art and vice versa? Do you ever find yourself conflicted between fashion and art?

I am so lucky to be surrounded by so many otherworldly personalities and creative energies while working in the universe of fashion. This project is absolutely influenced by the fashion world and the friends that I have made through being a model. In traveling all over the planet, I have learned how easy it is to feel alien, out of place, and alone. I create aliens of people who I understand, people who have opened up to me in some way, and people who share the experiences and emotions I've had while living in this fashion vortex.

I would say that the most difficult difference/conflict to grapple with would have to be going from being in control as an artist to the total relinquishment of control as a model. There are definitely instances in which it is difficult to go along with something I don't agree with — whether it is ethically (e.g. wearing furs down a runway) or stylistically, there's a lot of internal conflict when you have an opinion and have to keep quiet about it (or even promote its opposite) for your job. But I really do believe that all art is valid, and I try to look at all my jobs in fashion as opportunities to help bring another artist's creations to life.

Have you always felt different/"alien" or is it something that's come up as you enter a more mainstream modeling world? How has the modeling world affected your perception of yourself and loved ones as "alien"?

Working in fashion has taught me a lot about the value of anything unique. It's always the things that you are bullied for or embarrassed of growing up that set you apart in the fashion world. Over the past three years, I have grown to appreciate these little inconsistencies in humans and in myself — not just physically, but personality-wise, too. Everyone is WEIRD! And these little quirks and "flaws" in people are what make us so special. So yeah, I've always felt alien. I think everyone does a little. The difference is that now, I don't mind feeling that way because I know that the things that make me feel like an alien are what set me apart.

What has been your favorite show/collection this season?

I absolutely loved the Louis Vuitton show. Every season I am so excited to see what Nicolas Ghesquière comes up with. There is something so futuristic, multi-dimensional, and kind of unattainable about the LV girl. This season every model looked like an all-powerful space queen ready to rule the universe. 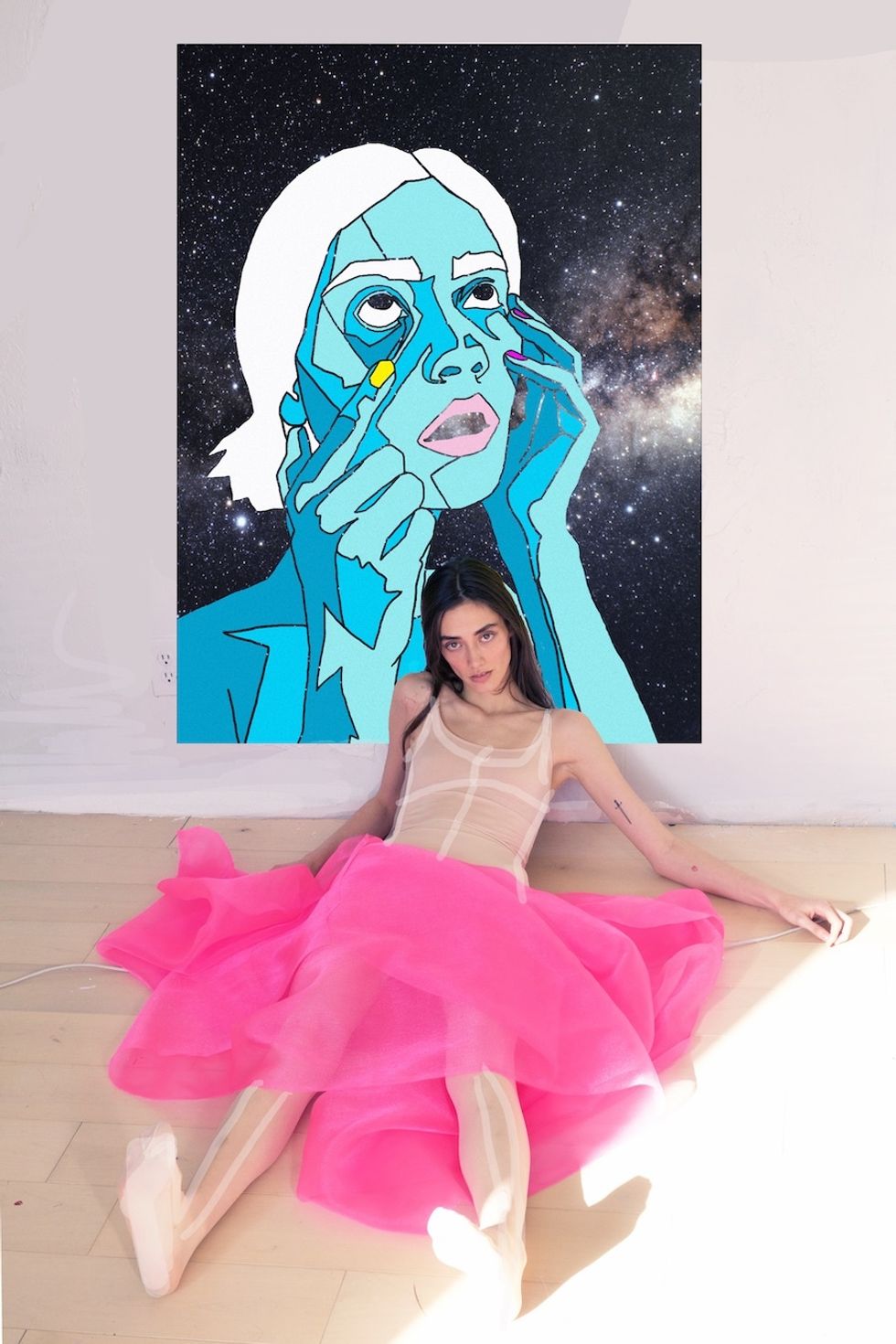 What have been your most formative experiences as an artist and model?

I actually think my first job as a model may have also been the most formative because I learned so much about the artistic process behind fashion. I spent six weeks in Milan during which I stood by the side of Miuccia Prada every day while she designed her Fall/Winter RTW collection. She and her team spent hours pinning fabrics to me while I stood there observing their creative process. Somehow, at the end of my time there, there was an entire collection ready to be worn down the runway and sold in stores all over the world. I was so lucky to have had this opportunity because I was immediately exposed to the artistic side of fashion. From then on, I was able to appreciate the hours of hard work and attention to detail that go into each piece that I'm lucky enough to wear.

Are there things about the art world that you wish were more like the fashion world?

I wish the art world were a bit more like the fashion world in that NEW is better. When a new model enters the high fashion runway scene, no one can get enough of her. With art, it's usually the opposite — OLD is more respected, and I've found that it's harder to break into the art world as a new and unknown artist.

Would you rather be known as an artist or a model?

An artist! I want to be known for the things I create!

What has most surprised you about the people/"aliens" you've encountered in the world of fashion?

It sounds silly, but growing up, I never imagined that models had unique personalities in addition to their beauty. Because of the way we're often portrayed in the media, it was always just their faces that I saw and never anything else. When I first started modeling, I expected that other models would have the stereotypical "model" or "pretty girl" attitude. But meeting, working with, and becoming one of these models has just really taught me that everyone has so much more to offer beyond what they present at face value. The depth and quality of the women I have met from all over the world has been just incredible. It seems so obvious, but I think this surprise — and the sheer fact that it even surprised me — really had an impact on me and is a huge driving force behind "My Aliens."

Models are often not valued for skill or effort, but rather for things we were born with. We do not have any creative voice or opinion, which sometimes does create a conflict in my head because I came into this industry from 22 years of life in a universe where my value and self-worth came from everything besides my looks. In fact, it was drilled into my head all my life that looks don't matter, and that to succeed I needed to study hard and learn skills to apply in the real world. In this way, fashion completely conflicts with my personal values — it's hard to have a job where how well I do depends on the one thing I was taught not to depend on.

I think this complete reversal of values might be why I feel so lost in this industry sometimes. For me, modeling often becomes a world of lonely confusion where I feel upside-down and backwards and that maybe I just don't belong —sounds like outer space to me!

Be sure to catch "My Aliens" on March 15th at the W Los Angeles in West Beverly Hills.

Robert Longo On Making Art In the Age of Trump

Artist Johan Wahlstrom Reacts to His Popularity With the MAGA Crowd

Enjoy These Side-by-Sides of Male Art and Cat Toys