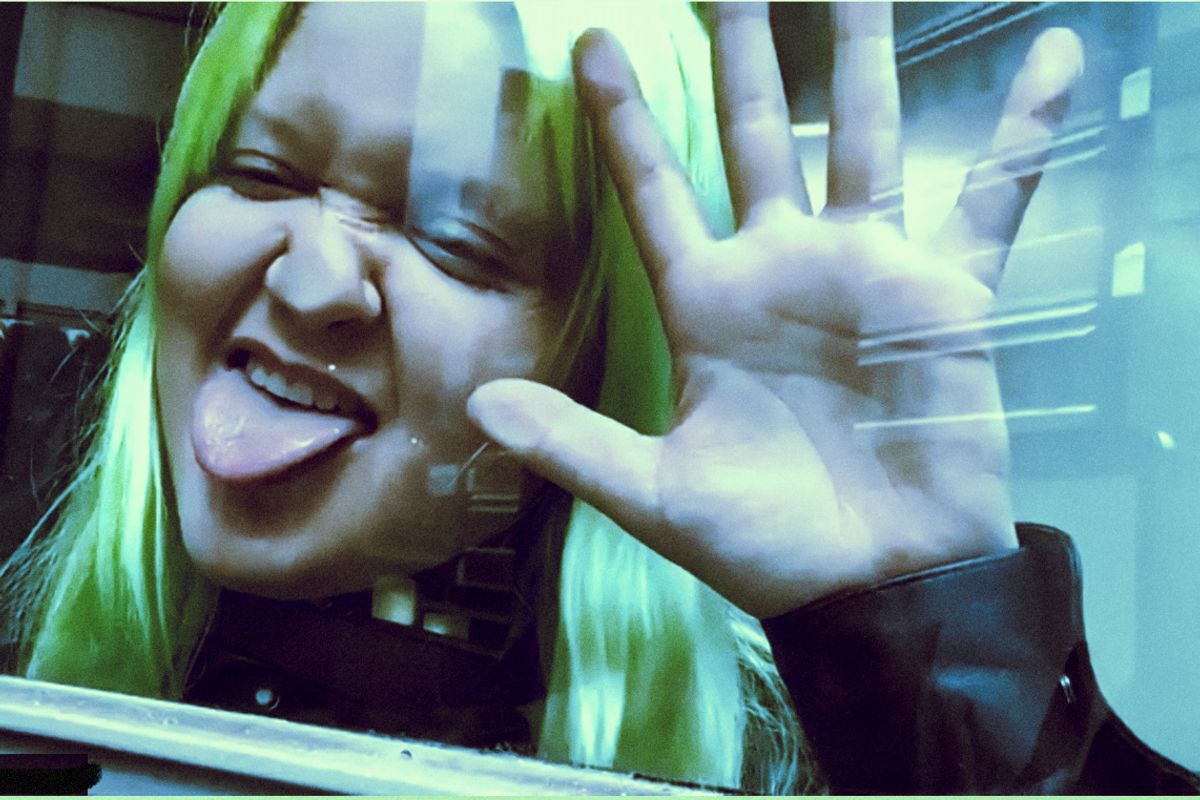 Now It's ALMA's Time to Shine

At 16, ALMA emerged into music as a contestant on Finland's version of American Idol. She didn't win, but placed high enough for people to start taking notice. Plus, it didn't hurt that her signature neon green hair left quite the impression. A couple years later, one of the judges, Finnish rapper Sini Sabotage, called up ALMA and asked her to feature on a new single and join her on tour — but it was only just the beginning.

Related | Shamir Wants You to Own Your Feelings

All within a year, ALMA signed to a major label, put out her first single "Karma" and had a top 20 hit on the UK charts with the earworm-y pop anthem "Chasing Highs." She quickly became an EDM go-to with producers like Felix Jaehn, Sub Focus and Martin Solveig all tapping her as a featured vocalist for their own singles. ALMA's resume only grew from there, linking with Charli XCX and Tove Lo on back to back singles for Pop 2 and Blue Lips respectively. As a songwriter, she's notably penned tracks for Miley Cyrus (including the critically polarizing "Cattitude"), Matoma and Lindsay Lohan's musical comeback single, "Back to Me."

But perhaps ALMA's mostly incredible achievement to date is the recent release of her debut album, Have U Seen Her? As a true student of pop, the project unfolds like a survey of the greatest 21st Century divas. There's touches of M.I.A., Lorde, Lily Allen and Amy Winehouse with nods to the influence that collaborators like Miley and Charli have had in the field. Have U Seen Her? overflows with a youthful exuberance and fearlessness with cuts like "Stay All Night" or "LA Money" easily serving as backdrops for nights spent party hopping until the early morning.

But the album also has its share of darker moments. The swaggering "Mama" tackles themes of substance abuse with a brutal unflinching honestly, while "Loser" manages to twist a sense of self-loathing into something verging on unlikely empowerment. It's this dark edge that ALMA brings to the equation that, like her signature hair, makes her stand apart fro the rest —and truth be told it's still only just the beginning.

How have you been lately?

It's been a weird life we're living right now, so I've had ups and downs. But overall, I live in Finland and here it's very, very nice. It's not as bad [of a] situation than in many other countries, so I've been kind of good. Obviously it's weird; I put a record out and I'm not able to move or tour around the world with the album, but I'm getting used to it now.

How are you feeling now that the album's out?

Super good. I've been making it for a long time and I was very scared to put it out. It's a very personal album, but I was brave enough to put it out and that makes me feel good.

Was there anything about the music-making process that surprised you?

These past two years have been crazy, learning and growing so much, in so many different ways. I think that's part of why the album took so long. I think I came to this business with an attitude like, Fuck yeah, everything's fucking cool and I'm just going to party and see where these things take me. Now I'm in a mood like, Fuck, I want to change the world. I've seen the world and now I want to change it. I want to use my voice. I think I grew up a bit, even though I'm still a huge party girl. That's never gonna change.

What's it like being a party girl under quarantine?

It's so fucking boring, especially because I came [back] from touring around America, then I went to Mexico with my mom for a couple weeks, and it's been very sober, very easy. When I went back home, I was like, I'm gonna see my friends and we're gonna have a good night out. There still hasn't been a good night out, so I'm waiting for that.

What was your pop diet growing up?

I was listening to a lot of indie-pop, but also Amy Winehouse and Lady Gaga. I loved it when Charli XCX came, her first record was like guitars and punk — pop things together, fuck yeah. Also, Gossip! Gossip has always been huge.

You've never really made attempts to hide your sexuality, but it wasn't until recently that you publicly came out. What motivated you to make that decision?

I think I just want to normalize it. Especially in my home country, there's a lot of gay artists that I know very well. They don't come out, but everybody knows it. I think there's a lot of gay celebrities too, but they never speak about it. I'm not judging them, I respect everybody's decision [whether or not they want] to speak about it and some people don't have the same backgrounds that I do. I have a very, very good background, like everybody accepts who I am. But I think it's important that we don't hide it anymore because we're still in a place where there's countries in the world that you can go to jail for being gay. Once I started to tour around the world, I went to places like Russia or Poland and I heard stories from my fans that it is not okay to be gay in their countries. After those meetings, I was like, I want to speak, I want to be proud of it. When I understood [being gay] is not normal everywhere. I just had to do it.

Were there certain queer role models or influential figures that you looked up to growing up?

Yeah, that's the thing. There really wasn't any that I knew about. Obviously Lady Gaga and "Born This Way," but there wasn't any lesbian artists that I was looking to.

Having been in the pop world for some years now, how have you seen things change?

I think it has changed a lot. There's definitely a lot of LGBTQ people everywhere. Sometimes I feel like it's a good thing on some concepts. There are some artists who definitely sometimes use it... I don't know how to say it in English...

Yeah, I think that's the word. I think it's amazing that there are so many more [visible] LGBTQ people and artists that I know out there. I think there should be different kinds of pop artists, so much more, because we need role models.

Was coming to terms with your sexuality always innate for you or something that you had to discover about yourself?

I think it has always been there and I always knew it. When I was a teenager, I was like, I'm definitely gay. Once I got older, it became like, Maybe this is not a cool thing; maybe I should hide it a bit for a second. But that wasn't long. I think I came out to my mom and dad when I was like 15.

It's kind of a small community. There's only two gay clubs in Helsinki and the other one is very "gays only," so it's not for women. But I have my own little gay gang. We hang out together, we throw parties and everybody's welcome, obviously.

I love that. The idea of finding your chosen family feels very intrinsic to the collective queer experience.

Yes! When do you feel like you found that?

You famously burst onto the scene at 16 on Finnish Idols. So from a very early age, you were living life in the public eye. What's it like growing up with that level of scrutiny?

After Idols, I went back to school and had my own little Idols teenage hype, but it kind of faded away. It was very important for me to have a couple years where I was just partying with my friends. I was actually touring with a niche female rapper, and I was singing backup things for her, so I kind of lived my freedom teenage years. Now that I'm a celebrity, real time here in my home country, I still don't think I understand. It's very hard for me to understand that I'm some kind of celebrity and I'm a role model for somebody, but I think that's the secret to how I survive this thing. I don't take it too seriously and then I allow myself to mess up or be awkward, because otherwise there will be too much pressure.

Was there ever a "pinch me" moment?

I think it was 2018 when I had a very huge hit on the radio all around Europe. There was a time when I came back home, went to the store and I was on six different magazines on the front page, one was like a trash magazine. I had paparazzi for the first time following me, so that was one, it just exploded. I was just like, Holy fucking shit, this is not my life.

In Finland, the paparazzi is a bit different than in America. They don't follow you all the time. They only follow you when you have an album out or some story to sell. I always know when I will have the paparazzi following me for a couple of days. It's stupid. I'm just like, Come on. This is stupid. Let's go to a sauna and fucking get naked and work together. We're just Finnish, this is not our culture, dudes. We are not America. So obviously, it's not cool and I don't like it.

At least that seems nicer than American paparazzi.

The American paparazzi is very nasty and I can't even understand how people deal with it, for real.

Now that the album's out, what are your hopes for the future?

I want to keep on making records. Albums are super important for me, so I'm already working on the next one. My hope is to collab with and make songs with amazing female artists. I would love to write songs with Lady Gaga, that's one of the biggest dreams. I love to tour and travel around the world, and I love club shows. My dream is not to conquer the world and do arena shows. I would just love to have my little fan base and make records and tour around the world forever.

Ultimately, what do you hope people take away from this album?

I hope that people, when they listen to it, it makes them feel something — like hope or Fuck, she's feeling this too! Even though I might look like I have it all figured out and I'm a winner and I'm successful, I'm still probably way more fucked up than a lot of my fans are.