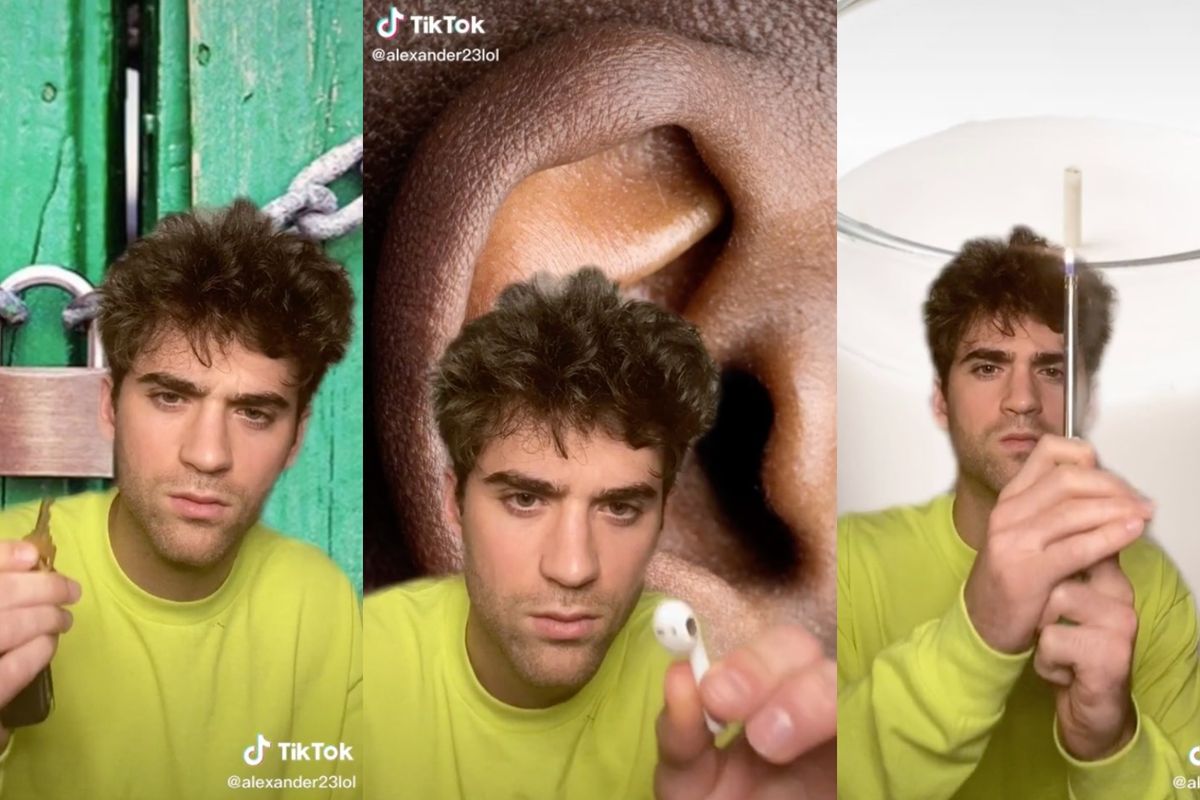 Alexander 23 Tackles His Own TikTok Trend With 'IDK You Yet'

"How can you miss someone you've never met?" Alexander 23 ponders over the strained plucking of strings for his newest track, "IDK You Yet." It's not quite a love song in the traditional sense, but lacking a partner doesn't stop him from holding out on hope that he'll find one someday. It's one of the buzziest singles from the master of lovesick songs to date, and that's saying a lot considering the surge in popularity of "Dirty AF1s" on rising hits playlists worldwide.

The somber and emotive track might not have looked on paper like a TikTok-ready smash, as it lacks the booming bass hits or a looping drum kit, but it has become one nevertheless. By now, we know that TikTok trends come in all shapes, sizes and tones, from the loudest and most bombastic ("Lottery (Renegade)") to the kitschiest and least expected ("Dominique") — and in the case of "IDK You Yet," the more fragile and honest, the better.

Related | Alexander 23 Is Lovesick in the Best Way

##pov: when you turn 16, you find out on your wrist how far away your soulmate is to you, the number start lowering, as he try’s to find you.(pt.1)##fyp

The lovelorn story behind the track is quiet and broken enough that the "IDK You Yet" TikTok craze has taken on several different forms, with no one dance or storyline prevailing. Users have been able to take the lyrics and make them their own, creating tenuous POV videos with backstories mainly rooted in fictional dystopian societies where soulmates, lovers and best friends are assigned to citizens rather than chosen. It's an unusual interpretation of the otherwise charmingly simplistic tune, but gut-wrenching all the same. Having racked up 100,000 videos using the sound itself — each with their own staggering viewcounts in the millions, meaning pure impression numbers are off the charts — "IDK You Yet" is on its way to viral success across platforms.

PAPER caught up with Alexander 23 via Zoom to talk about making his individual presence known on TikTok alongside "IDK You Yet," as well as the new video for the track, created entirely using illustrations during quarantine and directed by Chris Ullens. Read the full interview below.

the inspiration behind this song

I usually say "I don't know you yet." It kind of depends. It's funny because I actually had planned on calling the song "I Don't Know You Yet" and not abbreviating it. But I posted that little clip that caught fire and once that was kind of going, I was like, "I can't change the name now, that would be absurd." But I really just bounced it out like that to share with my manager and a couple other friends.

And you were like, "Yeah guys, this is it. This is the title, this is what I planned all along!"

Exactly, but I didn't want to then put it out two weeks later, and everyone's like, "Well, I don't know where to find it." You know, that just felt like a disaster in the making. I feel phonetically and aesthetically it is pleasing to look at so I'm not too mad at it.

So is this your biggest streaming single yet?

Yeah it certainly is. Aside from "Lucky," the song I did with Chelsea Cutler, which has more plays than it right now — but as far as my own stuff goes, yeah. It has more plays than everything else and it's only been a month, I feel super fortunate. People seem to be connecting with it on a deeper level than just "Hey, I like the song." It's like "Hey, this song means something to me and this song says something that I haven't been able to verbalize and put into words."

no dancing allowed here only weeping

I caught wind of it when it was on my For You page. I was like, "Oh, I recognize that voice." It was immediate. I will say, not that it surprised me, but that it was interesting, because obviously you put a lot of emotion into your songs, but the dramatics and the acting that people have for some of their videos are beyond words.

That's one of the coolest things for me is seeing other people's interpretations, because I obviously know what it means to me and who and what I had in mind when I when I wrote it, but I'm getting messages from people like "Hey, I was adopted and I never met my birth mother, and that's what it means to me," or like, "Hey, my grandpa passed away and I feel like I never really got to know him before he died." Some incredibly insightful and deep things that obviously were not my intention, but this is just proof and it's something that I kind of live by as a songwriter, where I really believe that the more specific I can be, the more general I'll end up being. The more detailed and the more truthful to the story in my own life I can write it like, the more people will end up connecting with it in a multitude of ways.

You see some TikTok trends where people insert their own sounds into it, but that isn't the case for you. It's really just your song. I'm wondering what that's like as an artist? I've asked some people before if it feels like the trend takes away the personal meaning because you're sharing this idea with people who interpret it separately.

Yeah, I'd say not at all. Everyone has, I think, a different relationship with their own art and their own music. For me the emotional and cathartic part of the experience is the writing, and then after the song is written, I want everyone to use it in the way that best suits them and helps them the most. It's much more of a –– I feel like the word commodity has a negative connotation, but for me, I am so emotional while writing it, after it's done, I just want to deploy it in the most beautiful way to other people. I think one of the most beautiful things is it's my song until I put it out and then it's everyone else's, and I'm so okay with that. I want that.

Well, you haven't gotten to play live yet, right? So I'm curious, I got to see you when you were on tour with Omar Apollo — what do you think that experience would have been like to play it live?

I cannot wait to play it live. I'm so excited. Obviously I've been fortunate to see it's been covered so many times, to the point where I can't even see 2% of them. It's an insane thing. Which is also exciting as far as a kid who grew up sitting in his room playing other people's songs on guitar. It was like one of the most searched songs on ultimate-guitar.com so that was really cool. I can't wait to play it live also, because I feel like I write some songs that are incredibly difficult to sing, and this one is a little bit easier. I'm happy this is the one that went because some of my other songs that haven't fully taken off are just, the degree of difficulty is so much higher, so I'm pretty stoked about it.

the world may never know

I also wanted to ask about your TikTok account. You're pretty in the thick of it now, posting and stuff with over 100k followers. What are some of your takeaways from getting on the platform and not only having a song do well, but also your own audios?

That's a good question because I think the danger of TikTok is a song becoming bigger than the artist. You've seen that manifest itself in multiple ways throughout history, not just on TikTok; you see a song go to radio with a fresh new band, and they never have another shot because they'll never be bigger than their first song. So I think with anything, it's kind of just –– and it took me a while to do this –– but to find what works for you within the app. I'm not going to be the guy that's doing all the dance trends, that's just not me, but even if I were to do it, it's like, "Okay, how do I do this in my way? How do I make this true to me, and how does this feel like me?" So it's still a learning process. There are days where I'm just like, "I don't have anything useful to post, or cool to post," but just finding my voice within the structure of the app has been a challenge, but also super fun.

How did you come up with the idea for the video that's coming out?

I got introduced to Chris, who is the artist and animator — I think there were a couple of animators working on it, but he's kind of the head honcho creative of this video, through a mutual friend. We definitely Zoomed and talked about it, and he had ideas and I had ideas, but for the most part, I really wanted him to really take it to where he wanted to take it. I wrote it and produced it alone, and I shot and edited the lyric video, and I was just like, "I feel like I've really said what I need to say about this topic." And just to have someone I trust so wholeheartedly artistically and visually to give his unique perspective was a treat for sure.

I'm curious, are you going to incorporate the video onto TikTok? Or do you like the idea of these different mediums and different formats of the song taking form on their individual platforms, like keeping it to YouTube or keeping it to TikTok? Where do you see it existing?

I'm totally down to post it on TikTok. I think I already have posted one clip on TikTok. I'm so proud of what he did and the way he interpreted, visually, my song. I want everyone to see it as much –– I want to blast it out as much as I can.