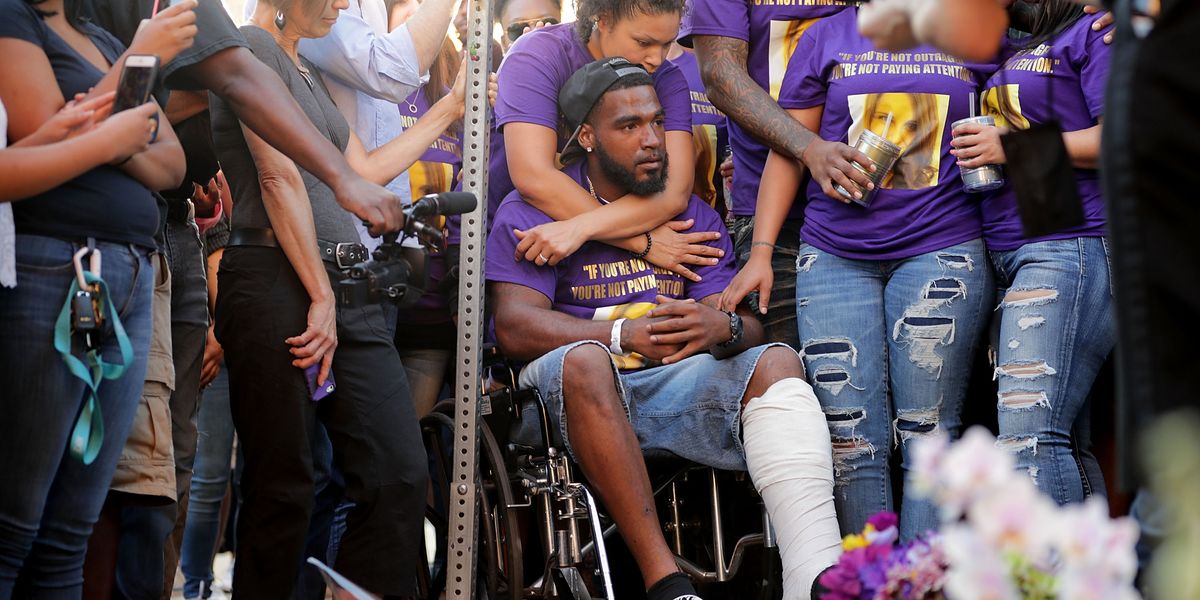 Five Things You Can Do in the Aftermath of Charlottesville

This weekend, white supremacists gathered for a "Unite the Right" rally that resulted in violent clashes with counter-protestors in the small college town of Charlottesville, Virginia. The rally, which was planned months in advanced, was originally slated as a response to the city's decision to sell a statue of Confederate hero Robert E. Lee, but quickly proved to be about so much more.

Led by Richard Spencer (himself a University of Virginia alum) and joined by David Duke, self-proclaimed neo-fascists, neo-Nazis and white nationalists showed up holding blatantly racist signs and shouting anti-Semitic slogans. Anti-racist counter-protestors, including groups like Black Lives Matter, the Democratic Socialists of America, students from the University of Virginia and the Industrial Workers of the World were also on the scene.

Shortly after Governor Terry McAuliffe declared a state of emergency, a car driven by a self-avowed neo-Nazi slammed into a crowded street, killing 32-year-old Heather Heyer and injuring 19 others (two police officers also died in a helicopter crash while policing the event).

The response from some politicians, especially President Trump, to such virulent displays of racism and anti-Semitism was weaker than many would have hoped for. At first Trump took the stance that there were "many sides" to the issue, saying, "We condemn in the strongest possible terms this egregious display of hatred, bigotry and violence, on many sides. On many sides. It's been going on for a long time in our country. Not Donald Trump, not Barack Obama. This has been going on for a long, long time."

After two days of intense national and international criticism, he took a stronger stance against white supremacists, saying, "Racism is evil, and those who cause violence in its name are criminals and thugs, including the KKK, neo-Nazis, white supremacists, and other hate groups that are repugnant to everything we hold dear as Americans."

Other top leaders condemned the violence (and the people behind it) clearly and forcefully. Angela Merkel, chancellor of Germany, said, "The scenes at the right-wing extremist march were absolutely repulsive – naked racism, anti-Semitism and hate in their most evil form were on display." Attorney General Jeff Sessions called the events "domestic terror." And in tech news, both GoDaddy and Google booted racist website The Daily Stormer from hosting its domain with them, after being called out online for allowing the site to stay up in the first place.

In light of all this, you may be wondering what you can do to help, so we put together the following list of actionable steps you can take to stay engaged with activism.

1. Attend a protest. Protesting is as American as apple pie. Look on Facebook and the websites of political movements you support for protests in your geographical area (there is one outside Trump Tower in NYC today, for example), or start your own. This helpful map from the progressive Center for American Progress Action Fund shows you where political events are happening all over the country, and you can also find events here. Note: If you find more pro-white supremacy rallies coming up, you can always attend/plan a counter-protest. Stay safe.

2. Donate. Though the (very real and important) responsibilities of day-to-day living may keep you from doing things that require your physical presence, tons of nonprofit groups that make protecting vulnerable groups their full time job could use your help.

Here are a few Charlottesville-specific places you can donate to:

Two victims of the attack yesterday

The family of Heather Heyer, who died as a result of the attack

3. Call your representatives. Your elected officials are chosen to represent the people - aka you. Make them listen. Call them and tell them what you think about the work they're doing, whether it's positive or negative. In a world where no one picks up the phone anymore, it can feel daunting to call a stranger and give them a piece of your mind. But there are lots of tools out there to make this process easier, like this one and this one.

4. Be informed. If you are white, do your homework. There is a vast amount of literature available on not only the Civil Rights movements of the past, but also on what is happening right now (including this handy guide the Southern Poverty Law Center directed us to when we reached out to them). Don't hit up your friends/internet acquaintances of color and ask them what you should be doing. (Though when marginalized people talk, listen). Understand your role in history. Take a fearless inventory of how you have benefitted from being white. This "Syllabus for White People to Educate Themselves" is a comprehensive Google doc of helpful links to reading material that has been circulating since the election.

4a. Don't shy away from difficult conversations. If you're white, talk to other white people. This step has been repeated time and again, and for good reason. White people are the only ones who can fully put an end to the false doctrine of white supremacy. White people are also, apparently, more likely to listen to other white people, so grab your friends, coworkers and family members and have a chat. Talk to people about what you've learned, and share where you've found gaps in your knowledge. Here's a helpful flowchart for talking to people who get defensive about racism (also useful for evaluating these tendencies in yourself).

5. Take care of each other. The movement against hatred is never-ending, and life is short. There is strength in numbers, and value in softness and support. Stay in touch with yourself, and check in with your friends to send them love. There is community in resistance. You are not alone.