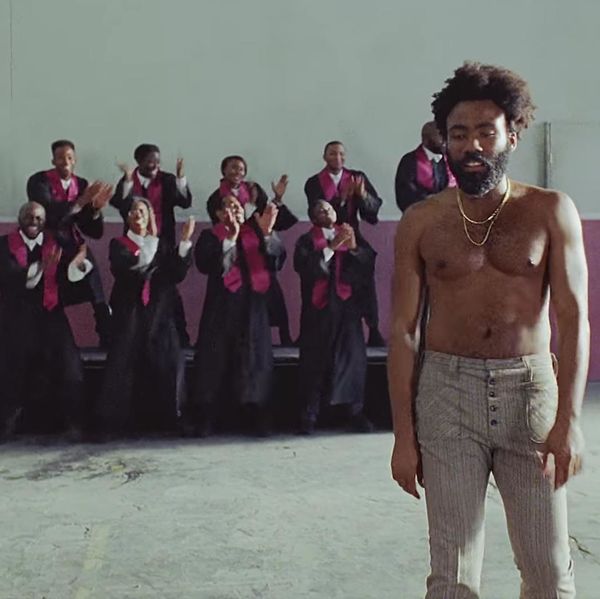 As the Fourth of July rolls around, we are expected to wave flags with stars that don't represent Puerto Rico and Gwam, and to pledge allegiance to a government that tears children from their parents at the US-Mexico border. While our government's oppression is nothing new, it has become more explicit since President Trump took office, promising to make America great again as if it was ever great, and threatening the rights of anyone who isn't just like him.

We are led to believe America is the land of freedom, a place where, if you work hard enough and commit to your dreams, anything is possible. But the American dream of self-earned wealth and good fortune only works if you're someone seen as inherently American, and if you're playing on a level playing field. This Fourth, it's important to remember all the unsavory parts of our nation's history that too often get swept under the rug — the intergenerational trauma, the lack of media representation, the sexual violence, the genocide — that keep people from achieving the "American Dream."

Here are a few songs that tell a different story of America:

"Americans," the closer on Janelle Monáe's subversively fun third studio album Dirty Computer, is an ironic ode to the seedy and violent parts of U.S. society, from its obsession with guns, to its chronic underpayment of women and the enduring legacy of Jim Crow. Having recently come out as a "queer black woman in America," Monáe's album addresses many of our nation's worst habits and traditions throughout its 14 tracks, with "Americans" serving as a culmination of the themes and a rebellious kiss off to the oppressive barriers that would hold try to hold someone like Monae back if they could. As she reminds us at the end of the track, "I'm not crazy, baby, naw, I'm American." - Claire Valentine

To an outsider looking in, no portrait of America will ever be as pure as Estelle's "American Boy." Sure, it doesn't address the prolific gun violence, endless policing of women's reproductive rights, incomprehensible racism, naked xenophobia, quashing of femininity, LGBTQ acceptance, blatant disregard for those less fortunate and shameless individualism at which the rest of the world looks at, shakes its head and utters a long, guttural sigh (all reasons because of which my father refuses to visit me here), but it exemplifies all that America thinks — and hopes — itself to be. Of course, it only addresses the American coasts, considered to be the most progressive regions of the States ("I heard that Cali never rains and New York's wide awake," Estelle sings), but in one song, "American Boy" exemplifies all that fascinates foreigners enough to leave their lives and start a new one. Estelle's U.S.A. is romance, it's sophistication, it's hope, it's Broadway and beaches. It might be the reason I'm here. - Beatrice Hazlehurst

Lana Del Rey, pop's reigning high priestess of Americana nostalgia, has spent her whole career thus far singing the praises of an America that used to be: a mythological promised land for all in search of freedom. In the extended monologue for 2012's "Ride" video, during which she wrapped herself in an American flag and twirled on a tire swing above desert cliffs, suspended from the heavens, she ominously intoned, "I believe in the country America used to be." So much has changed in five years. As if predicting the Trump-era fallout of so many values America has long promoted as its keystone sacred truths, LDR released her fifth full-length Lust For Life last year, and her reverence for America has grown decidedly more critical, as evidenced by the smiling flower-child of protest she embodies on the album's cover art. Lana is nothing if not an artist committed to types of duality. What is striking about deep cut "God Bless America — And All The Beautiful Women In it" is its prescient arrival before the #MeToo breakout following the explosive allegations levied against Harvey Weinstein last October. It imagines — over spare 808s, sweetly uplifting acoustic guitar lines, and Lana's lilting harmony — a world in which women are safe and unthreatened by patriarchal forces of power, but at any turn could be intruded upon. Another alternative is a matriarchal paradise, so lines like: "Even walking alone, I'm not lonely/ I feel your arms all around me," take on nuanced meaning. When she triumphantly sings the "God bless America" refrain and adds "all the beautiful women in it" and then, by song's end, "and all the beautiful people in it," it's both a hopeful prayer, and to this administration, a challenge. - Michael Love Michael

This rollicking single from Green Day's 2005 blockbuster opus American Idiot remains relevant for its anti-establishment overtones. "Holiday" deftly mixes operatic pop-punk that sounds like a raucous good time, with cheerily sung lyrics that indict the government for acts of war and treason: opening couplet "Hear the sound of the falling rain/Coming down like an Armageddon flame" sets the tone. It's post-Bush radio bait for the anarchist; an undeniable rallying cry for the Trump-era apathist. - MLM

Amidst all the chaos clouding the potential for a true American dream, PC Music cult producer EASYFUN created a track that underlines stateside tension, with Estonian artist Iiris repeating the lyric, "I don't wanna be your U.S.A." Juxtaposed with bouncy pop production and an explosive summer chorus, EASYFUN's latest bop leans into the joys of escapism and traveling to anywhere but here. "Take me away," Iiris sings, both as a demand and a wish. - Justin Moran

Lana Del Rey is America. There are few other artists who have confronted their home nation in song so often, and Del Rey's love for the States could not be more clear. For every song describing her country's vast offerings is a "National Anthem," wherein Del Rey assumes her glamorous, greedy alter-ego and addresses America's underbelly. "Money is the anthem of success," she chants, "So put on mascara, and your party dress": everything is fine, as long as you're creating capital — a sentiment that could not be more American. The lush strings and heavy synths denote opulence, and Del Rey does not shy away from singing about the U.S.A's misguided obsessions: her love story is for the "sixth page," referencing America's fame fetish, "Winin' and dinin', drinkin' and drivin', excessive buyin,' Overdose and dyin' on our drugs," she continues, touching on many expensive extra-curricular activities undergone in the pursuit of pleasure and presented without judgement. Numerous other luxuries, only available to the affluent, receive shout-outs. And finally, the most devastating line of all: "Dark and lonely, I need somebody to hold me." U.S. dollars don't buy happiness, but they might get you a house in the Hamptons and a brand-new Bugatti Veyron. - BH

"Who Will Survive in America" — Kanye West

This Kanye throwback samples Gil Scott-Heron's poem "Comment No. 1." Heron, an activist, musician, and spoken-word performer, was writing in the 1970s about being excluded from social justice movements run by white liberals who failed to understand the unique experience of being Black in America. Heron sharply critiques the centuries of oppression that we are urged to forget daily "with a gagging perfume." Words like "freedom," "democracy," and "justice" blind many Americans from recognizing that the the enslavement of Black Americans and the genocide of Native Americans was central to the foundation of the country. We celebrate our country as exemplifying democracy, a system where evey citizen has a voice, without acknowledging the countless people we deny citizenship, voting rights, and economic justice. The titular phrase is urgent, and feels all too relevant today. When we police the boundaries of our country so violently, when we tell so many of our citizens that they are sub-human, who do we really want to survive here? - Vrinda Jagota

"Just want my piece of the American pie/ Got your slice/ Where is mine?" On "American Pie," lifted off Shea Diamond's debut EP Seen It All, the soulful trans vocalist questions why her wants are not considered needs within the U.S.A. "People say, 'You're a trans person and you don't deserve, to be happy, to have a husband,'" Diamond told collaborator Justin Tranter in conversation for PAPER. "All these things that people get naturally, what would it be like to have that?" - JM

When I think about the being socialized as a brown girl in America, I always come back to middle school, when bodies began to change and beauty — the wispy blonde hair, Parisian nonchalance, and unseasoned food that signal it — gained more and more social importance. I remember looking at my mother, whose thick black hair, brown skin, and loud nose look like mine, and thinking she wasn't beautiful, wishing she was someone else, someone who could teach me about to be the best American girl possible.

I looked down on her cumin-scented aprons, her Indian accent, the gods she prayed to, the fabrics she loved. Neither she nor I understood the culture shock and racism I was experiencing from my white peers, so our relationship suffered, a casualty to the sacrifices people of color are expected to make to belong in America. She interpreted my learned hatred for brownness as a hatred for her as an individual. As I struggled to see myself in an America that never represented me, I resented her inability to prepare me, an unfair expectation, because a brown or black person can never be prepared for the trauma of existing in white America.

Though she doesn't say it explicitly, this same struggle feels, to me, central to Mitski's "Your Best American Girl." She can't help trying to be a lover's best American girl, despite her awareness that part of how she was raised stands in stark contrast with who he is and what he values. When she sings that she finally approves of her own mother, it feels like she's eschewing the approval of white America, a group that might never value her for who she is, for the kind of unconditional love a mother provides. - VJ

"This Is America" — Childish Gambino

Donald Glover, aka Childish Gambino's Trojan Horse protest song "This Is America," a darkly ironic and caustic interrogation of what it means to live in the violence of the US disguised as a summer radio bop, immediately set cultural conversations in motion with the SNL airing of its equally complex video. Touching on racism, the prevalence of mass shootings, the joy of black art and the iron fist of the police state, "This Is America" gives us plenty to meditate on and consider, which is perfect for a beat that has us hitting replay over and over again. - CV