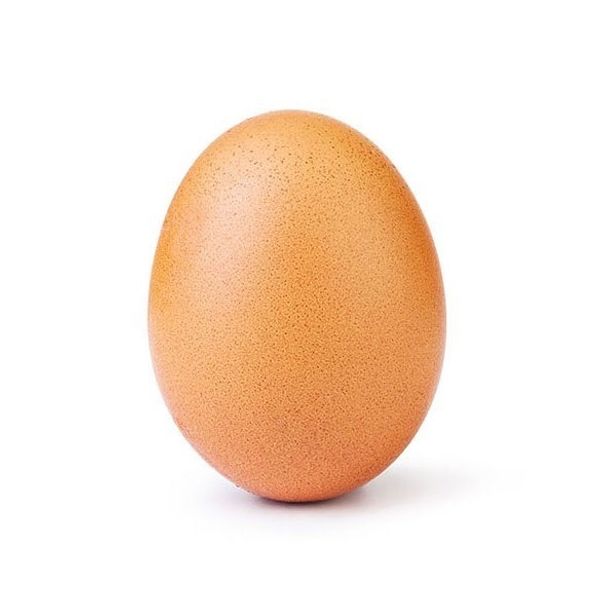 This Egg Is More Popular Than Kylie Jenner

Over the weekend, in a mass populist coup, a photo of a brown, freckly egg posted by an Instagram account called @world_record_egg surpassed Kylie Jenner's reveal photo of Stormi as the most liked Instagram post in history.

According to the account's owner, she first posted the egg on Friday, January 4 and it had only 8,000 likes by Tuesday night. The egg first started gaining viral momentum on Wednesday, and by the weekend, in the high double digit millions, the impossible was starting to seem possible.

The egg finally hit 18.1 likes on Sunday night, soaring past the 18 million on Kylie's iconic shot of newborn Stormi grabbing her finger. A few hundred thousand people rallied around Kylie's photo to bring it up to 18.3 million likes, but the egg now sits at a whopping 29.5 million likes.

Following its victory, the egg account, which refers to its new following as "Egg Gang" made a celebratory post on its story. It's also promised a forthcoming merch drop, and shared a warning about imposter egg accounts, and an egg-dubbed spoof of "Can't Touch This."

Kylie has been a good sport about the ordeal. She currently "likes" the post and shared a response video of her cracking an egg on the pavement. But why wouldn't she be? Involvement in a viral stunt only means that millions more, who had no idea that she held the record now know she's #2.

The moral of the story? Our society's burning collective desire to make a joke out of influencer culture is strong. Who wouldn't participate in a little Internet absurdity, on behalf of parodying the internet absurdity of a baby photo with 18 million likes? (No offense Stormi, you're a dream).

There does seem to be something important about the strategy of anonymity, both with regards to the mystery Egg master and their innocuous photo choice. Other accounts attempting similar stunts for years, for instance, @HalfOnionInABag, whose campaign to overtake Donald Trump's Twitter following, started last year and topped out at less than 630 thousand. But maybe it's unsurprising that more users were moved to "action" by the prospect of upsetting Kylie Jenner's Instagram reign. As one Egg commenter put it:

Despite alleged forthcoming merch and promises that the egg gang "is just getting started," the egg-whisperer behind the account (who has pivoted from telling outlets that she's a British countryside chicken named Henrietta) seems to have little interest herself in becoming the next Alex from Target or Bhad Bhabie.

She tells PAPER via email that she's an individual from London (not a part of a company or organization) but doesn't elaborate much on her "whirlwind week." She explains that there was little strategy or planning behind the campaign. Rather than a vendetta against influencer or celebrity culture, the egg account was a simple experiment that began after she stumbled on an article about the top 20 Instagram posts.

"I thought it would be an interesting experiment to try and beat the record with something as basic as possible. Which led to me deciding on the egg."

On why the egg was so successful? "I'm still working that out myself."

Offering no press release-ready moral or maxim, she's happy to leave the cultural commentary up to the Internet: "I guess it's also a comment on celebrity culture..."

Though her catch phrase has become: "...and on how fragile and easily cracked it is (pun intended). Really I just thought it would be funny if something as simple as an egg could take the crown."