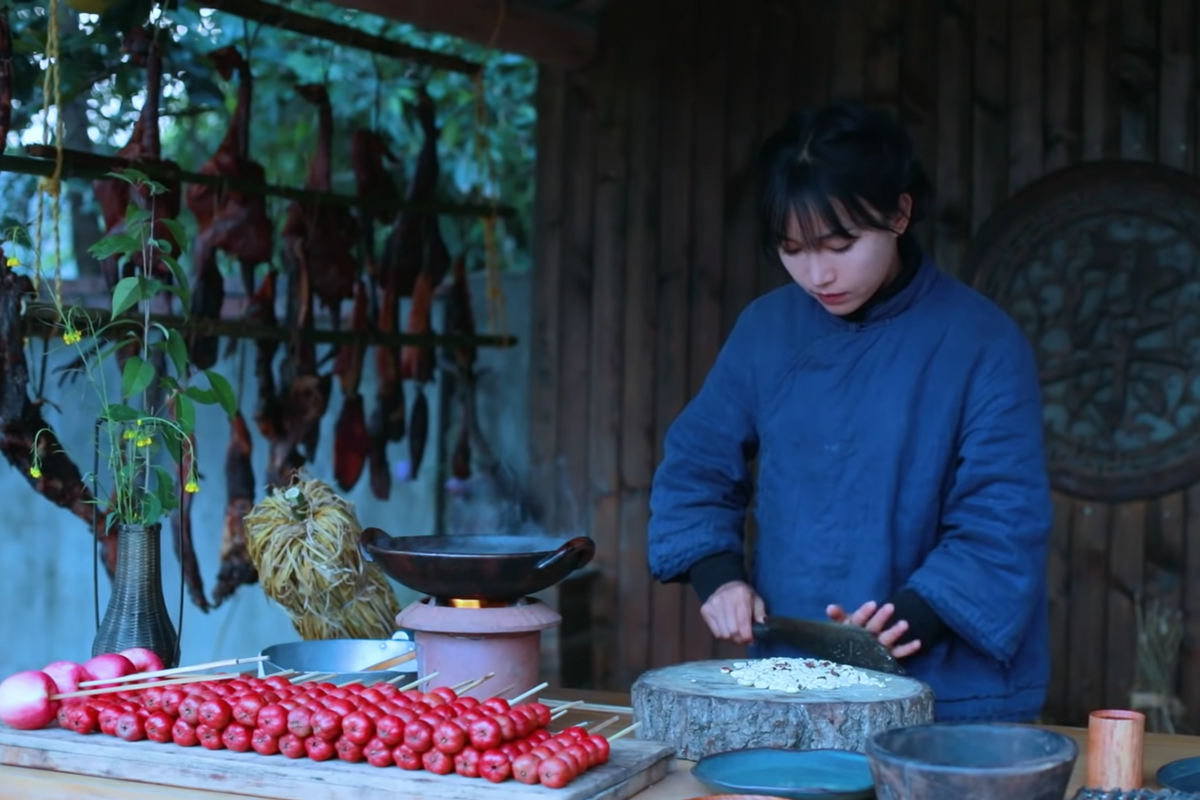 The video opens on a delicately-featured young woman with rosebud lips, porcelain skin and braided jet-black hair. She's dressed in traditional Chinese farmer attire: a royal blue Hanfu tunic and utilitarian gray pants. Kneeling with foot-long metal tweezers in hand, she delicately rakes a blanket of fallen leaves to uncover chestnuts, while two curious white puppies and a fluffy baby goat follow her every move. There is no voiceover or music at first — just the satisfying ASMR crunch of dried leaves.

The appeal of Chinese cottagecore is summarized in a comment below Ziqi's video with more than 24,000 likes. "Deep down," it reads, "I know this is how life is actually supposed to be."

"This word is so sweet to the ear," says 22-year-old Swann R., who lives deep in the French countryside and runs an online cottagecore clothing store. "I imagine a hot vanilla tea chilling on a desk, sweetened with honey from a local producer. I am thinking of the great misty English moors, of French castles, of Italian balconies."

Mari Muzi, a 26-year-old from North Tonawanda, New York, has been a fan of cottagecore since 2012, describing the movement as "the romanticization of homesteading." She's watched how cottagecore changes with each new culture it filters through. "The term is so new and it's still taking shape," Muzi explains. "It's fair game for any culture, I've come across Slavic and Puerto Rican cottagecore." Old-fashioned as its aesthetics may be, cottagecore has mixed with 21st century social progressiveness. The trend is known for its inclusivity and embraced of the LGBTQ+ community.

How is Chinese cottagecore unique?

Cottagecore claims a particular appeal In China, where many disaffected urban youths are overwhelmed by the stress and competition of life in the city. Thirty-year-old Ziji is a good example of this struggle. She dropped out of school at 14 years old to start working in Mianyang City to support her grandmother, who lived below the poverty line. There, she says she struggled to survive, working at various times as a waitress, bar singer and electrician. She recalls not having enough food to eat, and sleeping under bridges or on park benches. Ultimately, she moved back home to the mountains in the village of Northwestern Pingwu, where she soon became inspired to document her life on the farm with a single DSLR camera on a tripod.

Her most popular video, with over 38 million views, showcases the preparation of the Chinese specialty of lard-sealed pork. It's marinated in a mixture of Sichuan pepper powder and tsaoko powder for three days, then deep-fried, sealed in a jug with pork fat, steamed and stir-fried with green garlic. Like most of her videos, it ends at the family dinner table, with everyone enjoying the fruits of her hard labor.

Another video (with over ten million views), by Ermi Chuiyan, showcases the process of creating seven different duck egg delicacies over the course of two months. She carefully washes 100 duck eggs by hand, creates a mud and spice mix in which she buries several of the eggs and while pickling the others, harvests vegetables, shucks corn, pulls the kernels off individually by hand and drains the egg whites through a small hole to make a stuffing which is stuffed back into the egg. From there she makes a glutinous rice egg, preserved duck egg congee, egg yolk corn, crab yolk tofu, burnt pepper preserved egg, Songhua preserved eggs, and salted duck eggs—all for one dinner with her family.

Chinese cottagecore is not limited to young, attractive 20-something women. 63-year-old Wang Dewen, also known as Grandpa Amu, counts over 1.3 million subscribers on YouTube. He's a master carpenter from China's Shandong province and uses ancient mortise-and-tenon woodworking techniques, featuring intricately cut pieces of wood that fit together without nails or glue, to create toys such as a bamboo bubble machine and mini water wheel for his toddler grandson.

Not merely a romantic countryside aesthetic, Chinese cottagecore also seeks to specifically celebrate Chinese culture — especially in contrast to Western trends that have proliferated there in past decades.

Michael Pugliano, 38-year-old creative director at Ayzenberg in Los Angeles and fan of Li Ziqi explains: "It's interesting to note that Chinese-style cottagecore simultaneously seems to harken back to a more fabled pre-Communist Chinese dreamscape, while also championing a Mao-era focus on the power of hard work and agriculture."

The impression is also shared by China's communist party, which controversially named Ziqi a "good young netizen" and role model for Chinese youth in 2018. As a result, some accuse her of creating carefully constructed pro-CCP propaganda.

Bringing it all back home

Ziqi says her motivations have more to do with bringing more "life" to China. In a rare interview with China-based English language publication Goldthread, she explains the contrast between urban and rural life: "When I worked in the city, it was all about survival. Now when I work in the countryside, I feel like I'm truly living. I want kids in the city to see where their food comes from. A teacher friend once told me some students thought rice grew on trees."

And her videos certainly walk the walk. Those foraged chestnuts from her most popular video are roasted in a brick stove that she built by hand — brick by brick. Ziqi also showcases the arts of huózì yìnshuā (woodblock printing), shǔxiù (Sichuan embroidery), and shūfǎ (Chinese calligraphy) in her videos.

In another video, she raises silkworms, demonstrating the ancient art of sericulture. She picks the mulberry leaves for their food, washes and stretches out hundreds of cocoons individually, and finally enlists her family to spend the entire day stretching each cocoon even more over the surface of a large table. All this effort produces one quilt and outfit for her grandmother.

Chinese cottagecore has continued to grow in popularity both locally and internationally, even as anti-Chinese xenophobia has risen during the pandemic. As Pugliano explains, "anti-Chinese sentiment is often born from ignorance about Chinese culture, values, and its wealth of beautiful contributions to the world."

It helps that the content is also incredibly soothing — in globally anxious times, the longing for family, beauty and rural simplicity clearly crosses cultural lines.