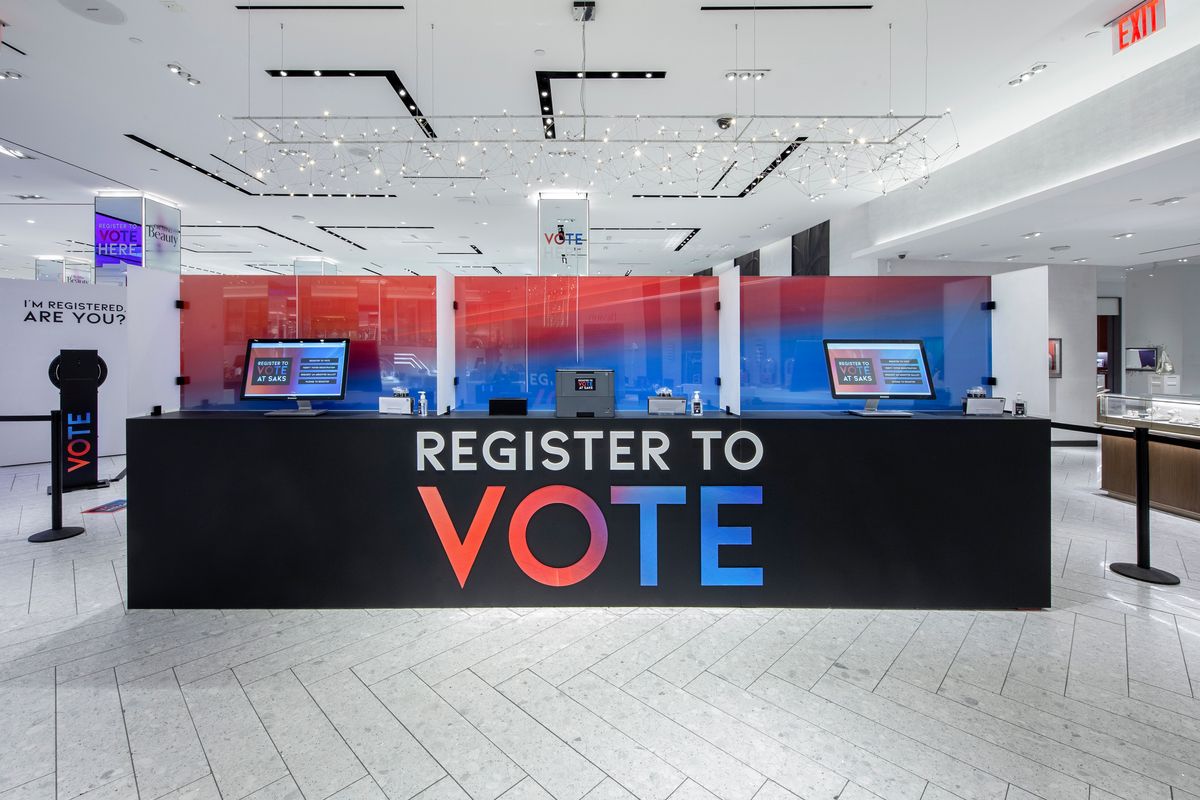 How Fashion Is Encouraging Everyone to Vote in 2020

Election Day is imminently approaching and one of the most important things you can do this fall is vote. Now more than ever, it's crucial that you make your voice be heard by registering to vote (and telling everyone you know to do so, as well).

As part of nationwide efforts to increase voter turnouts this year, several fashion labels across the country are utilizing their platforms to encourage voter registration with limited-edition, voting-themed campaigns and apparel.

Take a look at the selection, below, to aid in raising voter awareness before November 3.

Saks Fifth Avenue's windows are a hallmark of New York's fashion scene—and now, the luxury department store will use them to encourage voting. Until October 9, the brand's windows will use displays to highlight voting milestones. Saks stores will also contain voting booths where shoppers can register to vote, check their registration status, apply for absentee ballots—which will all be available online—and have their voting-related questions answered by HeadCount representatives.

Head to the Saks Fifth Avenue website now to register and check your voting status.

Swedish fashion giant H&M has joined forces with multiple American artists to create limited-edition voting merch for its Blanks line, which drops online and in stores today on National Voter Registration Day. Made to highlight the importance of community and voting rights, the collection features pieces with graphics by Baron Von Fancy, Sheila Rashid, Sophia Chang, Greg Mike, Gunner Stahl, Joshua Vides, and one of the brand's own employees, Trevonne Deveaux.

Additionally, customers visiting in-store can now check their voting status or register to vote by texting HMVOTES to 26797, as well as view voting resources on H&M's site, as part of its partnerships with the American Civil Liberties Union and I AM A VOTER.

Head to the H&M website now to shop your 2020 voting gear.

Bloomingdale's has created a "VOTE" face mask—2020's must-have fashion statement—in honor of the upcoming presidential election. Created by producer and director Allen Hughes, the mask (which comes in packs of two) is the center of a new campaign by the luxury department store. In addition to being extremely chic, $10 from the mask's sales will benefit nonprofit When We All Vote, which aims to increase participating voters in all elections. What more could you want in a mask?

Head to Bloomingdale's website now to pick up the election-themed mask.

Michael Kors is encouraging people to vote in the upcoming 2020 presidential election with a new campaign, titled "YOUR VOICE MATTERS." And at the focal point of the American designer's impactful initiative is a limited-edition, voting-inspired t-shirt and sweater, both of which will benefit the NAACP Legal Defense and Educational Fund, America's premier legal organization fighting for racial justice.

"Our greatest right and privilege as Americans is the right to have our voices heard," Kors says. "Voting is the ultimate way to make sure that your voice is not lost. These T-shirts and sweaters are a reminder for all Americans to vote and not let their voices be extinguished. It's also an opportunity to raise money for legal and social justice." Exclusive to the United States, the t-shirt and sweater serve to reinforce the campaign's central message: "No matter who you are, your voice, and your vote, can make a difference."

Head to the Michael Kors website now to shop your 2020 voting gear.

Motivated by her recent conversations surrounding voter education and voting rights, Hailey Bieber approached Levi's with the idea to create a special Public Service Announcement to educate, encourage, and motivate the largest and most diverse generation in American history — a group of 70 million young eligible voters — to discuss politics, post about the upcoming election and vote. In collaboration with prolific filmmaker Oge Egbuonu, who conducted research on calls-to-action and directed motion videos set to artist Jazmine Williams' spoken word poetry, Bieber and Levi's were able to spread critical messaging in regards to voting power and also reveal a full line of apparel to further cement their initiative.

"I had a vision to put together a beautiful and powerful call to action to educate and inform the next generation of voters, and to me Levi's felt like the perfect team to partner with on this," Bieber says. "Oge is an incredible force and she really helped me bring my idea to life. This election to me is the most important in my lifetime and I'm at the age now where I truly understand the impact my generation and the next has. My hope with this call to action is that it would encourage, educate and inspire this next generation to vote in November and to understand why it's important."

Head to the Levi's website now to shop your 2020 voting gear.

Stuart Weitzman is forging its politically involved agenda with the launch of the 5050 VOTE boot, a limited-edition reinvention of the label's signature silhouette. In an effort to raise awareness for the importance of voting in the upcoming presidential election, the American footwear label is donating 100% of the net profits to I am a voter, a non-profit organization that intends to increase voter participation nationwide. The 5050 VOTE boot reimagines the brand's popular 5050 back-stretch model, whose name speaks to its one-of-a-kind half leather or suede and half micro-stretch construction.

Head to the Stuart Weitzman website now to shop your 2020 voting gear.

This year marks the 100th anniversary of a woman's right to vote, and in honor of Women's Equality Day, Fabletics launched an exclusive "Exercise Your Right To Vote" t-shirt — an essential reminder for all to engage in the upcoming election. As Election Day comes closer, the Kate Hudson-founded activewear brand is calling on its 2 million VIP members and beyond to utilize their voices and register to vote. Boasting a simple, bright colorway and a vital message, the unisex tee is available in a wide array of sizes ranging from XXS-4X.

Head to the Fabletics website now to shop your 2020 voting gear.

In honor of the 100th anniversary of women's suffrage, Suzanne Lerner, co-founder and president of Los Angeles-based clothing and lifestyle brand Michael Stars, is paying tribute to Gloria Steinem, one of the most influential feminist leaders, with a capsule collection featuring embroidered t-shirts and accessories that aim to encourage communities to exercise their right to vote. $50,000 of sales will directly benefit three path-forging organizations each led by women of color, helping to increase voter turnout and registration: Black Voters Matter, Voto Latino and March On.

Head to the Michael Stars website now to shop your 2020 voting gear.

If you're searching for a voting-inspired addition to your jewelry collection, look no further than designer Jennifer Meyer's newly released 18-karat gold necklace. From now until November 3rd, 20% of sales from the LA-based label's "VOTE" necklace will benefit I am a voter, the non-partisan organization that aims to guide a cultural shift around voting and civic engagement.

"It is so important that we exercise our right and responsibility to vote, now more than ever," Meyer says. "During this crucial time, we are proud to donate a portion of sales from our 'vote' necklace to I am a voter. We want this necklace to be a hopeful reminder to everyone around you: let your voice be heard and go out there and VOTE!"

Head to the Jennifer Meyer website now to shop your 2020 voting gear.

Head to the Talentless website now to shop your 2020 voting gear.