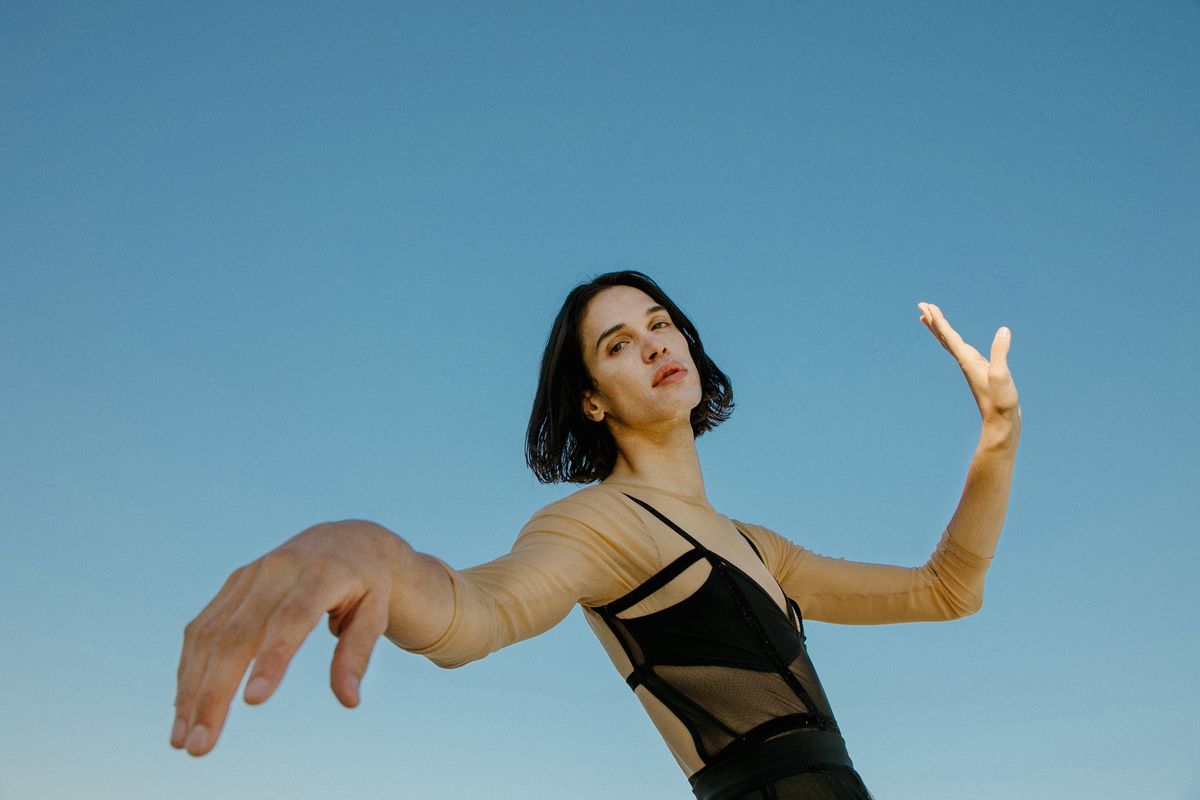 Tzef Montana isn't yet ready for a shoot happening after our interview. They tell me this when I call. They're in LA, far from their hometown of Corinth, a suburban town in Greece — but this is their newfound, more queer friendly base. Before Montana shoots with celebrated photographer and art director Niko the Ikon, who just happens to be their best friend, they've got critical prep to do: Lots of shaving and tanning.

"Basically, what I'm doing is a Playboy shoot, naked in Malibu beach," they laugh.

The project will be playful: Pure creation, Montana calls it, and free of restrictive client oversight.

Again, Montana laughs: "This is going to be on our networks, on our Instagrams, which is the most important publication."

But whether it's a shoot for a Japanese magazine (like the one a day prior to our interview), walking for designers like Eckhaus Latta, strutting zombie-like in a Charli XCX video (and live on The Tonight Show Starring Jimmy Fallon), or posing for David LaChapelle, Montana puts forth exceptional effort and consideration into the work they do.

"My job is really not modeling; it's creating a body of work where I can fit the most purpose I can," they explain. "Because modeling can be a little empty, or it can be something else. I'm not doing catalogs. I am not the puppet for the agent of the fashion industry that just guides me to just do catalogs and chase the money. I care about what I'm doing."


As a genderqueer artist, Montana is inherently an activist. Sometimes that's more obvious, like their appearance two years ago on late-night Greek TV, where educated viewers about gender identity and sexuality, and maintained composure despite the "macho" host's interrogating. (Montana later detailed the event as part of a personal essay for Mel Magazine). But in every collaboration, every shoot, every action, their mission and message is always there.

"I don't represent one brand completely, but as a whole, queerness is what I represent," Montana says.

Upholding one's values and ideals when confronted with capitalist opportunists can't be easy. There's been more than a few occasions where Montana has encountered photographers or designers that "aren't nice people," who lack manners or behave poorly.

"There's a huge circus around non-binary talk, trans talk, feminism, all of it," Montana says. "Everyone wants a piece of it. However, there's an approach to it... Sometimes it's been approached as very, like, an editorial thing, like it doesn't do anything for visibility. It just glamorizes, and I am forced to form a role — which I inspired you to do that in the first place — and you're taking it somewhere where I don't agree with."


A primary point of contention: Makeup.

Long hours, early call times, or other demanding facets of the job — Montana is fine with all that. But you cannot diminish their identity, they stress.

Once, working as an extra on a music video for a Korean artist, donning heels and doing their "Naomi Campbell moves," the director called over the speaker: "Put Tzef in boy clothes." That was an immediate, instinctual hard no for Montana.

They're not cool with wearing bras five cups too big, either. ("I'm flat-chested... It makes no sense," they explain.) And tucking isn't something they necessarily agree with for themselves: "I don't want to tuck in," Montana says. "Why tucking in? I think it's beautiful."

Montana, whose background is Belgian and Ethiopan-Greek, recognizes their beauty-standard-fitting features — thin, lighter skin, a small nose, full lips, pronounced cheekbones, staggering height — affords them privilege. But with that access, they can facilitate positive change in queer representation.

"I sell out every day. But I break even, you know? I try at least to find a balance, because you gotta function, and you live in this ecosystem, and you gotta be a vital part of it in order to participate, and offer what you have to offer," Montana says.

On Sunday, Montana headed to New York for Fashion Week. It required a lot of preparation; they are their own manager. (Their background is in artist management; a few years ago, their master's in music business from UCLA led them to a gig managing Slayer). And while doing all the booking adds another layer of labor, it allows them to more accurately determine which brands genuinely align with their ideals. Gender politics matter, and touting inclusivity in a tagline isn't enough.


"Anyone can write a beautiful press release on their website, and be politically correct," Montana says. "I need to meet the person I'm working with, and understand that, you know, I fuck with that."

Instincts and energy weigh heavily in those decisions. Working with the right folks is a form of solidarity — and "once you merge forces," Montana says, "you're way more powerful as a whole."

Teamwork is important to Montana, too. On their Instagram, you'll see a lot of Montana solo, naturally. But in making opportunities for themselves, they're helping further clear the way for all queer models and artists. Whatever the platform, and even if they're selling out — their words, and they do it all the time — they're holding fast to subverting gender norms, and dismantling the patriarchal machine that upholds them.

"We need to focus on making the right decisions to everything that [is] our choice, that's under our control," Montana says. "And basically keep resisting the corporations and resisting to capitalism in every way you can. You work, but keep it independent. Keep it cute."