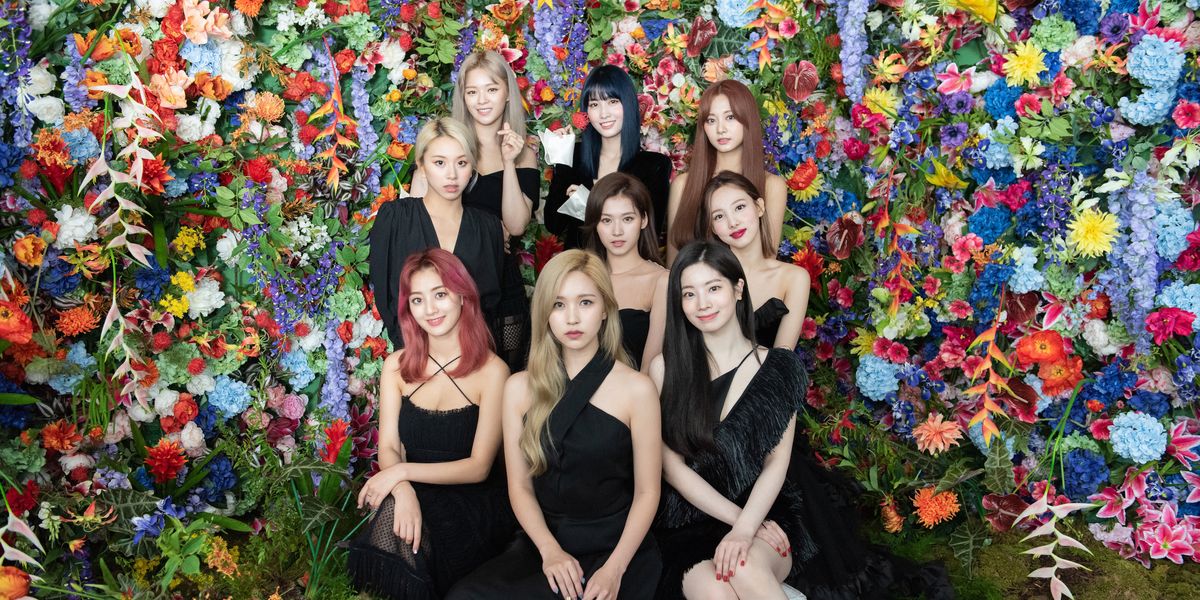 "The message of this album can be written in one phrase, 'Eyes wide open to a new sense,'" says TWICE member JIHYO of the global phenom's new effort, Eyes wide open, which sees the group returning its K-pop roots after five years in music. "It portrays how one can't stop oneself from crossing the line of the good and the evil, even if he or she knows that crossing the line is forbidden and dangerous."

With this frame of mind comes a more mature sound and direction for TWICE's second full-length project, which plays with '80s-inspired synthwave production across 13 tracks that feel retro and forward-facing all at once. Fans of Kim Petras' dark-pop album, Turn Off the Light, and Dua Lipa's Future Nostalgia will find something to love in Eyes wide open (Dua even has a co-writing credit on "Behind the Mask").

"TWICE is trying songs with the synthwave genre for the first time," says MOMO, speaking to the throwback genre that specifically grounds album opener — and current single — "I CAN'T STOP ME." JEONGYEON adds that synthwave "inspired the whole album," and can be defined as a fusion of European electronic with more nostalgic American pop tunes.

The "I CAN'T STOP ME" music video, also out today, is a prime example of TWICE's star power, as the girls dance — perfectly in-sync, of course — throughout different environments, both on earth and somewhere in space. It's a high-power track about seduction and the ways we're constantly attracted to things we know we shouldn't want — things that are bad for us. "I see the end, I know it's not right," they sing, but ultimately: "I can't stop me, can't stop me."

Below, PAPER caught up exclusively with TWICE to talk about all things Eyes wide open.

Your most recent EP, MORE & MORE, was released in June. What have the last several months looked like for you as a group?

Your last two albums, BDZ and &TWICE, were Japanese pop albums. How did you decide that Eyes wide open would make the switch back to K-pop, in a similar fashion to your 2017 album, Twicetagram?

DAHYUN: We wanted to make the switch for our fans. ONCE has been waiting for our second full album for a very long time. To return their love and show our gratitude, we have put in hard work for Eyes wide open!

Those albums included, it's no secret that you've spent a lot of time together as a group. Eyes wide open will be released during the week of your fifth anniversary. How do you feel you have evolved both as people and in sound in the last five years?

NAYEON: For the last five years as TWICE, we have been working harder than ever. Unlike our trainee years when our only goal was to debut, we now strive to deliver music that we want to create and present to the world. We actively share our thoughts in the process of album making and, in doing so, have grown as artists over the last five years.

CHAEYOUNG: Personally, I have learned about what I like and what stories I want to share with the world. It's getting clearer and more definite every year. As an artist, my music spectrum has become broader as I gained the courage to try a wider variety of music.

Why is Eyes wide open the best reflection of who you are as a group today? How does it reflect the amalgamation of your individual styles?

TZUYU: Our past albums have showed a younger and energetic side of us. Eyes wide open shows our mature image. I believe this image best reflects our style these days since it has been five years since our debut; and like the mature image of this album, we have grown up, both as artists and people.

Which genres influenced the track list of Eyes wide open? Will this reflect a new era of music for TWICE as a group?

JEONGYEON: The genre of our title track, "I CAN'T STOP ME," is synthwave. This genre is a rising genre, defined as a mixture of Europe electronic sound and synth sound of the '80s in the United States. The entire album, and not just the title track, has a retro vibe, so I believe the synthwave genre of "I CAN'T STOP ME" has inspired the whole album.

MOMO: TWICE is trying songs with the synthwave genre for the first time. I believe starting with this album, we'll be able to explore and experiment with additional concepts and styles of music to see how they fit with TWICE. Eyes wide open is the beginning of a new era of music for TWICE.

On that note, you are all known for your viral dances and upbeat songs such as "Dance The Night Away" and "SIGNAL." Can we expect the same upbeat energy in Eyes wide open as we have seen from you previously, or are you hoping for a different vibe with this album?

SANA: We went with a different vibe for this album. Eyes wide open contains different style songs that our fans haven't heard from us before, so I am very excited to see their reactions on all tracks!

MINA: We definitely plan to present songs with different styles and concepts on Eyes wide open. Our members have decided that we have to grow with our songs, instead of letting the energy stay the same over the years. You can look forward to how this message translates on our second full album.

You recently released a short teaser trailer for Eyes wide open, which showcases the aesthetic of the album. What can you tell us about the look and feel of this work as compared to your previous releases?

CHAEYOUNG: Compared to cute and bubbly concepts that our albums for the last five years have focused on, we tried to focus on a more mature concept for Eyes wide open. You'll be able to see our updated looks and enjoy a new vibe with this album. You can enjoy this album even more if you compare it with our most recent album, MORE & MORE, since the story and the aesthetic between these two albums connect.

"I CAN'T STOP ME" is the title track for this album and also the opener. What about this song makes it the perfect opener to this new era for TWICE?

TZUYU: I believe we can call it a perfect opener to the new era of TWICE, since it connects the whole album together with the retro concept and sets the tone for what fans should expect to see and hear. Still, each track has its own uniqueness, so I hope our fans take their time to compare how each track has its own voice within the overall concept of retro.

Looking at Eyes wide open, your fans can pre-order three different versions of the album: Story Mode, Style Mode and Retro Mode. What kind of experience are you hoping fans and listeners get from each of the distinct versions?

JEONGYEON: The Story version of the album manifests a world that continues from our ninth mini album, MORE & MORE. It contains a story that extends from the last album, as well as, a new story.

MOMO: The Style version is the main concept of this album. TWICE members dressed in the gray suits portray a visual that is different from what you've seen of TWICE so far. On the other hand, the Retro version represents the overall mood and concept of the album.

How does the story mode continue the sentiment of your last mini-album? What is the message you want to send to fans and listeners?

NAYEON: There is a scene in the "MORE & MORE" music video where MINA eats an apple. The two music videos connect through this scene. "I CAN'T STOP ME" contains the story after that one bite of an apple and how the members, or the characters in the music video, are standing on the risky line between the good and the evil.

JIHYO: The message of this album can be written in one phrase, "Eyes wide open to a new sense." It portrays how one can't stop oneself from crossing the line of the good and the evil, even if he or she knows that crossing the line is forbidden and dangerous.

Shifting away from the album, with the COVID-19 pandemic putting a hold on all concerts and tours this year, how have you managed to bring your music to your fans at home and stay connected with them at the same time?

DAHYUN: We used to share our music with our fans at concert, and are sad that we haven't been able to see them in a while. We have been trying to provide virtual opportunities for us to interact with fans through various online contents and fan meetings.

MINA: We are planning to present an English version of our song for our international fans. Even though ONCE and TWICE cannot physically be together due to COVID-19, I believe that our hearts are close together, no matter where we are.

Despite the uncertainty of the world right now, will we see any virtual concerts or any plans for any upcoming tours for next year?

SANA: We don't have a definite plan for a tour or another virtual concert yet, but we are all really hoping to perform soon. Even if we don't know when we can perform in front of audiences, we will always be prepared for it.

TZUYU: Hoping that COVID-19 gets better worldwide, we would love to perform for our fans on tour. However, if this difficult situation continues, we will keep our eyes out for other ways to be together with our fans.

After Eyes wide open is released, what's next for TWICE? Are you taking a break after this album or are you jumping straight into new music?

JIHYO: We always prepare ourselves to show our fans a new side of TWICE. Therefore, after we are finished with our comeback album Eyes wide open, we will take a short break and then get back to work for another album.

CHAEYOUNG: When this albums promo is over, we are planning to take a short break and then take time to prepare for end of the year performances. Stay tuned for what's next for TWICE.