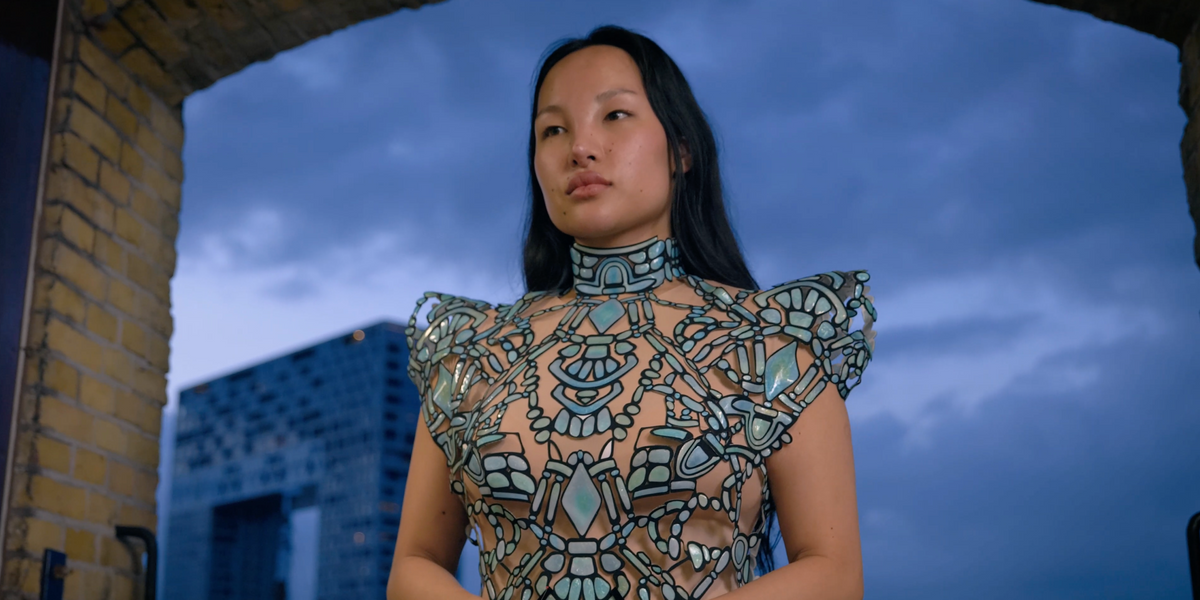 Tsunaina on Merging Her Dreamy World With Iris van Herpen

Seeing the list of performers and entertainers Iris van Herpen is intrigued by is almost as fascinating as her witnessing her otherwordly creations each season. From Games of Thrones' Carice van Houten to Dutch-Iranian musician Sevdaliza, van Herpen's past collaborators are some of the most refreshing names outside of fashion to dabble in the couture world.

This season, in addition to being inspired by champion skydiver Domitille Kiger (who quite literally jumped out of a plane in van Herpen's finale dress), the designer counted model and singer Tsunaina as her latest muse. Though you might recognize her from her fashion shoots — she's worked with everyone from Farfetch to Robert Wun — Tsunaina has long been passionate about music, and already has four singles under her belt, including "Waterways," which debuted in January of 2020.

For van Herpen's collection video, Tsunaina wore a nude-illusion structured minidress with turquoise detailing and overlay in the accompanying film shot in the Dolomite Mountains, which she also provided the vocals for in a soundtrack composed by Evgueni Galperine. The London-based Nepali beauty, who describes her music as "organic opera," has long been a fan of van Herpen's dreamy and sci-fi world.

"I've admired Iris' work for a very very long time, from when I was a teenager," she tells PAPER. "I'm fascinated with biology and tech, and nature runs through so much of my music and imagery, so I feel like it was just a matter of time until we crossed paths. She heard my music, we met, and it was surreal how often our minds and ideas aligned even though our mediums are totally separate. Then, doing the music for the show was the most organic step into merging our worlds."

The collaboration was a no-brainer for Tsunaina, whose multi-cultural upbringing is an important part of her approach to fashion. "I always want to be unapologetically myself, and that includes bringing in heritage in projects where it's a seamless fit," she says. "I think of this look as my jade armor. I'm often very stripped back, soft but, for this collaboration, I wanted to present an aspect of femininity in nature that is strong, unshakeable, almost battle-ready."

It's a concept that has long been embedded in van Herpen's work, this idea of expression at its most personal and peak through the lens of haute couture, which the designer describes as a laboratory for innovation in collaboration with science.

"Transformation and change have been driving forces within my designs for many years and, to create that, collaboration, innovation and sustainability are interlaced within our craftsmanship of haute couture," she says of her collection, which is based on an Earthrise image that became a symbol for a growing environmental movement. "The duality that is pictured in the iconic Earthrise image can be linked to the duality within my designs: nature in dialogue with science, our future parallel to history and tradition, craftsmanship in symbiosis with technology."

Indeed, even though these days Tsunaina is focused on her music, the experience was a one of her most personal "fashion" projects yet. "It makes my heart full, honestly. To breathe my ideas into life, literally with my most intimate vocals into the film's score and to see my look go from concept to a tangible armor to step into, that's exactly what I want to do, to work with people who inspire me and to tell stories and create worlds together."