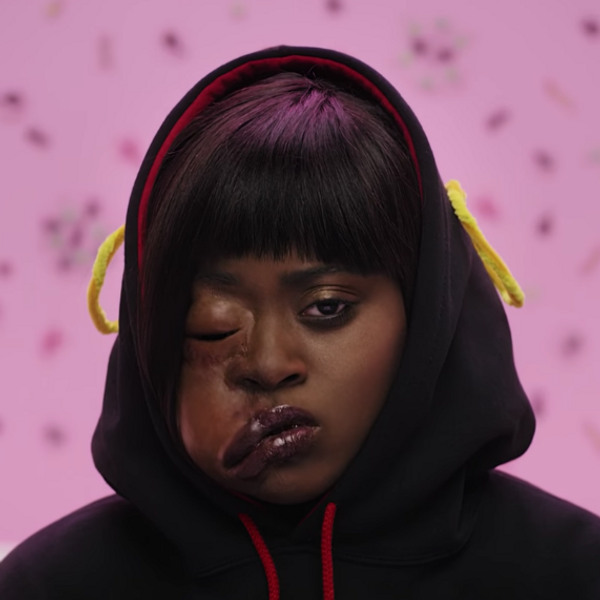 Like just about everything else in 2018, the music world was nothing if not full of surprises and plot twists. In a year defined by the high tensions of political drama, celebrity beef and social uproars, some of the industry's biggest names and newcomers put out visual works to reflect the times.

Music titans like The Carters elevated their art to Louvre-levels while Philadelphia rapper, Tierra Whack, made her debut on an astounding 15-minute visual album. Newer sensations like Cardi B followed up on the breakthrough "Bodack Yellow" with a fashion film directed by Petra Collins at the top of the year and Spain's Rosalía racked up views in the tens of millions for her pop-fused flamenco.

For artists like Sevdaliza and Childish Gambino, their songs and accompanying videos were unflinching with artful commentaries on race and oppression. While Ariana Grande's lead single from Sweetener, became the first of a string of hits and Janelle Monáe's vagina pants in "PYNK" set the Internet ablaze.

Some of the progress seen in a thriving civil rights era saw creative powerhouses like SOPHIE and Azealia Banks declaring their personal freedoms in evocative visuals for "Faceshopping" and "Anna Wintour." On another end of the pop spectrum, Troye Sivan stepped into gay heartthrob territory in his sensual video for "My My My!"

As we close out 2018, PAPER put together a list of 20 music videos that stood out from the pack this year.

For a song that's charged with a special brand of euphoria, the feat of Robyn's visual for the title song of her latest project is just its accuracy. In the Max Vitali-directed visual, we see a slow motion portrait of the fans that attended her London casting call. The group of diverse and expressive party-goers convey how the song simultaneously races with emotion and slows down everything with intensity.

When Florence Welch needed help describing the feeling of being ghosted by a lover, Autumn de Wilde Welch was there to direct her in this amazing video. Choreographed with a group of dancers in multicolor veils and skirts, the visceral sense of power in their movement is that of a higher power all together. "Big God" is a big mood and one of the greatest videos of the year.

To say there was a fabulous Cher video in 2018 without Cher actually in it sounds like an oxymoron. In a studied homage to the original ABBA classic from 1975, Jake Wilson's 2018 interpretation of the video renders it a poignant call to female solidarity. The treatment sees a star-studded cast of everyone from Betty Who to Trace Lysette and Rumer Willis lip-synching for one of the top videos of the year.

For Kelela fans who also love The Sims, this video must have felt like some work of fan fiction. In Sims world, Kelela rides down the freeway in a convertible with her girls and even hashes out some relationship drama with a sexy stud. Funny enough, the animation doesn't spare the song any of its punch and makes for a really fun treatment.

In a fascinating exploration of artifice, SOPHIE's electronic head undergoes a digital splicing, morphing, twisting and eventual glitter-combustion that explodes like the very sounds she engineers. As just one of the few incredible visuals the Grammy-nominated artist put out, this stands out as a feat of digital commentary.

Preceding the release of Bloom, Troye Sivan set the tone for what would be a fabulous era for the singer with the gorgeous video, "My! My! My!" Directed by Grant Singer in a sexy warehouse romp, Sivan carries the confidence of a young NSYNC member with the swagger of George Michael. This alone makes for one of the best music video moments of the year.

Azealia Banks is often misunderstood, but there's no question that the musician's discovery of self-love looks and sounds like just that. In "Anna Wintour," Banks jumps out with the palpable energy of empowerment and growth. Whipping out her staple megaphone for one of the year's most exciting dance songs, the independent rapper teased a portion of what's sure to be more thrilling bops to come.

In a year full of massive songs and huge videos, the question Drake begs in "Nice for what" swiftly answers itself. Drake's ensemble cast of Hollywood women is a love letter to the ladies and a sweet moment of recognition.

In yet another testament to J. Lo's unrelenting beauty and eternal glow, she took the glam to Game of Thrones levels for a song that's serious about getting that ring. Whether she's sitting on her throne or busting out with an amazing dance break, Lopez delivered as always.

In one of his coolest surreal video treatments yet, Tyler, the Creator directed this stylized video under an alias, Wolf Haley. The love song depicts Tyler and A$AP Rocky as roomies aboard a ship. Kali Uchis sings the chorus from a small row boat off in the distance, clad in a yellow raincoat. Abandoning the daily apathy of the ship, Tyler goes on to balance on the red-beret's of the military and raps in a ghost costume. A forlorn Tyler also sits obscured by shadows as trumpet sounds illuminate parts of his face in another memorable, graphic moment. This is one you'll want to see again.

10. "This Is America" by Childish Gambino

There's no question that one of entertainment's heavy-hitting renaissance men, Donald Glover, is nothing if not a true provocateur. Much like in his other works, Glover carried the same keen sense of criticism when he released this video and song under his musical moniker, Childish Gambino. While the real meaning of the video's graphic display of gun violence and commentary on Black existentialism are seemingly still up for debate, one thing surely isn't — "This is America" stood out as one of the most talked about videos of the year.

Sevdaliza made an incredible work in collaboration with director, Emmanuel Adjei, that powerfully conveys the longstanding plight of African Americans. In a stunningly evocative short film, we see a Black male protagonist on an odyssey across a barren desert pulling a futuristic ship by rope alongside other men. After finding the mirrored oasis decorated with material possessions, he encounters Sevdaliza. Drawn to her as she floats above a small pool, he's absorbed into its depths- and the room floods. No stranger to amazing imagery, this one packs extra punch and resonance.

Janelle Monáe's 2018 offerings were abundant with strong visuals and a rolodex of looks to choose from. Painting the desert "Pynk," this infectiously sweet song shows a softer side of the artist and makes a resonant metaphor of fluidity and solidarity. The video, directed by Emma Westernberg, is also nominated in this year's Grammys Best Music Video category.

In one of the most fabulous visual interpretations of a Cardi B song to date, Petra Collins directed the rap sensation in a decadent, retro film. As the great dame of a lush, Hollywood trap house, Cardi stuns in red fur and emeralds while hundred dollar bills literally drip from the swimming pool. When she asks," Who that be fly as a martian?" the male models answer in unison,"Cardi."

6. "Apeshit" by The Carters

When it comes to naming power couples, there's no debating that The Carters enjoy a perch far beyond any other duo in entertainment. While this is demonstrated by many of their combined accolades, no portrait can express it more succinctly than the two of them, standing before the (actual) Mona Lisa clad in matching pastel suits at the world-famous Louvre after dark. Between sprawling shots of the historic museum and priceless works of art, Beyoncé and Jay-Z perform and pose alongside one another, their joint empire on display as its own masterpiece. The balance of their powers and majestic Black beauty on display is breathtaking.​

5. "After the Storm" by Kali Uchis feat. Tyler, the Creator

Even though Kali Uchis put out a handful of really impressive visuals from her transcendent studio album, Isolation, in 2018, this one belongs in a category all its own. In collaboration with the British filmmaker and photographer, Nadia Lee Cohen, Uchis played out a surrealist Americana fantasy where she grew her very own flower boy in Tyler, the Creator from store-bought seeds. The Bootsy Collins track is downright medicinal with a sweet optimism and vibrant imagery to match. Plus, Uchis singing into multiple blow dryers is a total mood.

In a collaboration as explosively fly as the video they created, A$AP Rocky is joined by none other than FKA Twigs for a manhattan joyride that sees the two hitting up the strip club and a jewelry shop, then raising hell in a lavish restaurant. The Diana Kunst-directed video is just one standout from a slew of impressive videos from Rocky's Testing album.

Tierra Whack's incredible and absurd 15-minute visual auditory project offers enough ideas to go around. Flexing her powers of versatility, the artist morphs from minute to minute, song to song with chameleon ease. From a delightful nail salon opening that takes a nightmarish turn once her hood comes off, the album unrolls fluidly. Thibaut Duverneix and Mathieu Leger direct the Philadelphia rapper in bits that vary from playing a taxidermist to singing alongside puppets in "Pet Cemetery" or growing out of a shrunken paper house. The video may be abstract, but one thing sure isn't: Tierra Whack's got way more where that came from.

Directed by Nico Mendez, the lead single from the acclaimed El Mal Querer racked up the views on YouTube and announced the singer bringing flamenco to the forefront. Displaying Spanish iconography against the industrial Barcelona landscape of the Rosalía's childhood, the video plays out like a surrealist fever dream. Trailing behind a moving truck where she hits some choreography or the lot where stands hand clapping, lights flickering, this video presents a visual style as rich as the tradition she comes from.

1. "No Tears Left To Cry" by Ariana Grande

When Ariana Grande's lead single from the smash Sweetener came last spring, the news sent the Internet ablaze. Breaking the diva's near-silence after a series of tumultuous life events, the Dave Meyers-directed film sent her message wailing from the tops of skyscrapers and tumbling through a rotating castle. The video's dark, dreamscape set and incredible hook make it one of the year's favorites and just the start of an album rollout with one epic video after the other (see "God Is a Woman" and "Breathin").