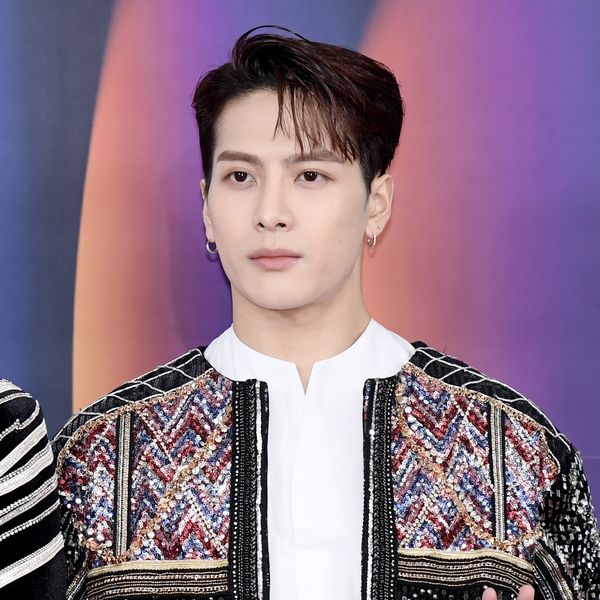 Fashion and music are inexplicably linked, especially for the superstars of K-pop. It's no surprise, then, that Chinese rapper Jackson Wang (of boy band Got7 fame) is a talent in both industries as evident from his Team Wang clothing line. Since its debut this summer, Team Wang is already a hit with the hypebeast crowd and Wang's millions of fans. Now, the brand is set to repeat success from its upcoming collaboration with streetwear resale giant StockX.

The unisex capsule is modern and minimalist, with pieces that are total streetwear fashion bait. A track jacket, track pants, vest — with a front pouch included — and T-shirt are designed in stark white, embellished with gold zipper hardware and the TEAM WANG logo on their backs. As an extra touch, StockX's authentication tags will be colored gold to complement the line.

However, the new collab can't be bought like standard collections. StockX's high-end resale site is based on pieces' market value, not original prices — which means Wang's capsule will be sold with an IPO method. Shoppers can bid on capsule pieces in an online auction, with prices averaged based on bids for their different sizes.

"We are the first brand coming out of Asia that has been given the opportunity to create an IPO with StockX and for Team Wang, that's making history," Wang said of the significance of this launch.

Creating a label was inevitable, as Wang has been a power player in the fashion industry for years. After founding the Team Wang record label in 2017, where he launched his own singles and solo album, Wang created the brand's fashion line. Thanks to his ambassadorships with Armani, Fendi and Adidas, Wang and his brand are synonymous with the international street style scene (he's even fronted Cartier's new Pasha campaign).

You can bid for Team Wang's new capsule now on StockX's website.