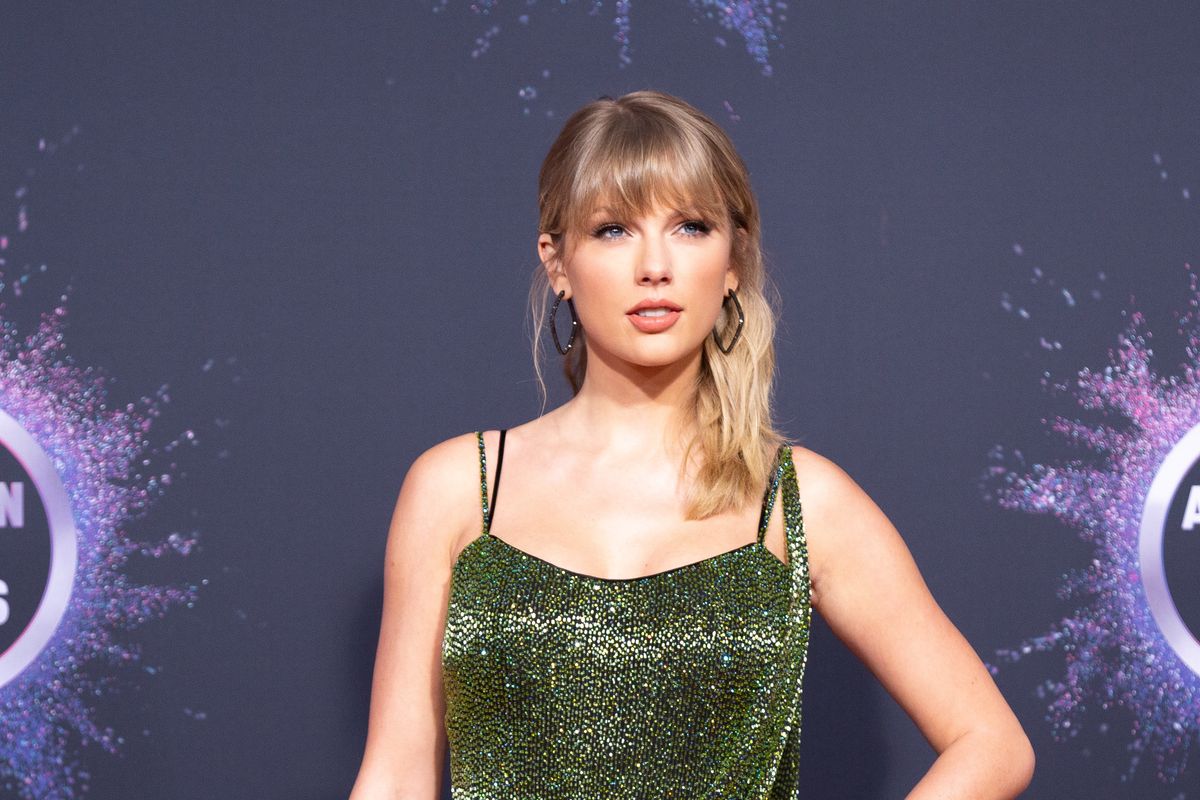 Taylor Swift dominated headlines leading up to the American Music Awards, and she had a grand old time commanding the show as well. Although Swift and her and ex-label Big Machine Records recently reached a deal confirming she could perform pre-Lover catalogue for an epic, flashy, career-spanning medley, there was some uncertainty about what would actually happen on stage.

It went down exactly as fans wanted: epic, flashy, and packed with celebrity cameos and Swiftian symbolism. Swift opened the performance pointedly on Lover's "The Man," which takes aim at industry sexism. She walked out in a shirt stamped with the titles of her six Big Machine-owned albums, jumping around with a posse of adorable little girls as backup dancers.

The crowd, including Billie Eilish — whose unapologetic standom of her idols-turned-peers is one of the many charming things about her — went wild over a nostalgia-dripping rendition of "Love Story."

Showing no love for her best-of-decade favorite "All Too Well," Swift's pick from Red was "I Knew You Were Trouble." Careful Swift, they're gonna come for you like they came for Gaga. Selena Gomez was spotted singing along, next to Swift's mother Andrea.

Sadly no clips of her performance of "Blank Space" are circulating at this time, but I encourage you to revisit her iconic 2014 rendition. Those bangs! By the way, we're not happy either about these blurry scraps of Swift's performance. Scooter and Scott, release the full-length, you cowards!

Swift then gave the girls and gays what they wanted, bringing out Halsey and Camila Cabello for "Shake It Off." Each pop queen took a few lines and at one point they all joined a Rockettes-esque chorus line. A good time was had by all.

Finally, Swift jerked us back into 2019 with "Lover," saving the last dance for ballerinas Misty Copeland and Craig Hall, while she serenaded them from a golden piano emblazoned with her own album titles.

Honestly, it ruled. As promised, Swift was awarded Artist of the Decade, Artist of the Year and Favorite Pop/Rock album, becoming the most decorated AMA winner in history and snagging the title from Michael Jackson.

During her highly-anticipated acceptance speeches, Swift kept it classy. She avoided naming Braun or Borchetta at any point, but effusively praised her new labels Universal and Republic after winning Favorite Pop/Rock Album. Instead of dragging out the drama during her Artist of the Decade award speech, presented by Carole King, Swift heaped praise on King, her dancers and the fans.

"I guess what I'm trying to say is that all any of the artists, or really anyone in this room wants is to create something that will last, whatever it is in life," Swift gushed.

"The fact that this is an award that celebrates a decade of hard work and art and fun and memories, all that matters to me is the memories that I have had with you guys, with the fans, over the years... Thank you for being the reason why I am on this stage."