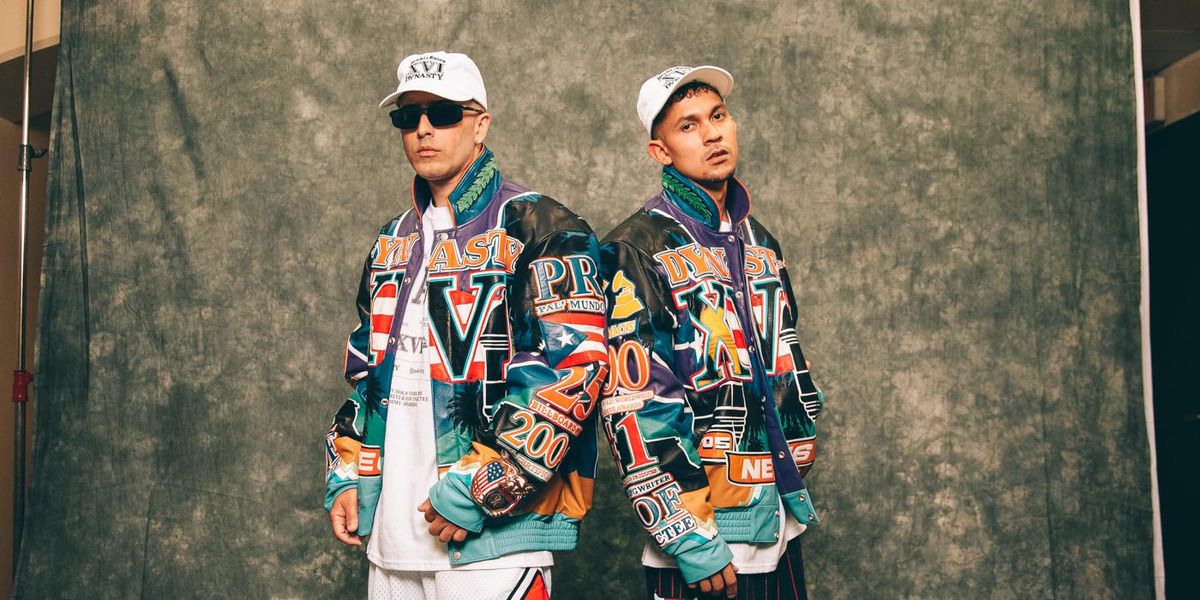 With mega hits like "I Like It," "No Estamos Bien" and "Gasolina," you've most definitely experienced the thumping reggaeton mastery of Puerto Rican producer Marco "Tainy" Masís. Now after over a decade of music success, Tainy has teamed up with reggaeton legend and longtime collaborator Yandel (of Wisin and Yandel fame) on a joint album, Dynasty, inspired by the evolution of the genre and their 16-year bond.

Related | Meth Math Wraps Us in a Sinister Web

The pair's magic began when Tainy was merely 16 years old, working together on tracks like "Pam Pam," "Noche de Sexo" and "Sensación." The two have since formed a dynamic relationship that has seen them shape the sounds of reggaeton through catchy beats and flowing lyrics.

"That's what the people get to hear, two people just putting all of themselves into it and all the passion in the world," Tainy tells PAPER. "It's just an amazing, brotherly relationship and I'm super grateful to say that today."

Coinciding with the release of the album, the pair announced two limited-edition collections with Puma and Starter inspired by their Puerto Rican heritage, sportswear and basketball championships. The range of ready-to-wear and accessories mimics the two's favorite silhouettes — oversized outerwear and sleek separates — that are complemented by graphic motifs and muted colorways.

Furthering their love for basketball, Tainy and Yandel teamed up with designer Jeff Hamilton, whose bold NBA jackets have been worn by the likes of Lebron James and Michael Jordan. Wanting to honor the sport and legacy, Tainy and Yandel have been wearing custom Hamilton jackets throughout the promotion of Dynasty — like in the music video for the album's lead single, "Deja Vu."

Below, PAPER caught up with Tainy and Yandel to talk all things Dynasty, fashion and reggaeton.

How did the idea for the jackets come about?

Tainy: The idea for Jeff Hamilton came when we started doing the album, just trying to figure out what the concept is. And by that time we already saw the Last Dance by Michael Jordan. And so I thought, We're fans of basketball, why don't we do something? It's the equivalent of those six years of NBA championships for the [Chicago] Bulls, and these 16 years of us. And with albums and songs and having successful moments, this feels like a dynasty, similar to what [the Bulls] did.

Yandel: I think that music and fashion go hand in hand. Whenever we make videos we want to dress super modern with what is happening in fashion and we did that again with this project, Dynasty. I loved everything that we wore in the video, the jackets, the shorts. We don't usually wear these styles, but that is the flow, the fashion of now, to be more relaxed.

Tainy: For us to be doing this, with Starter and Puma, all of that started coming to us from sitting down and trying to bring that concept into something where people could get a jacket like how they saw it in the video or buy some shoes, shorts or t-shirts and just feel like they're a part of it. I think that's something amazing that we really appreciate and I'm happy that people got to be a part of that moment in time for us and be a part of the dynasty. So we're super grateful for Puma and Starter for coming with us and going on this journey.

What's it like producing hits for others artists vs working on your own sounds?

Tainy: There's a lot of different processes that have come into this. As a producer, let's say Yandel is doing an album, I always try to think, What does he want to talk about? What is this album like? What is the feeling like for him? What is the concept behind it? Just trying to get into that world and try to bring his ideas into music and probably bring a little bit of my essence and my input, but it's mainly what he's looking for. And sometimes now when I'm starting to do my things, it's kind of reversing the process. I will come up with ideas, feelings and emotions in the music that probably lean towards a concept and a feeling where I'm at right now as a musician, as an artist.

How would you describe your relationship in and out of the studio?

Tainy: Exactly what Yandel says, this is a really rare type of relationship. I've worked with many artists and, thank God, I've always had really good relationships with them, but there were certain ones where the chemistry is really different. And also just the vibe that you give each other. Starting from such an early time in my career, and then seeing how it developed because of the trust that Yandel has in me, just letting me be free as a producer, I think is something that made me feel at home.

So what can you tell me about Dynasty?

Tainy: My inspiration behind this project was I just really, really wanted people to see that span of years. How did we sound at the beginning? How did we sound mid-way and how do we sound in the future and now? So I think that was the idea for it, but really I had a lot of inspiration just from [Yandel] and Wisin. When I first started coming into music, they were already mega stars. So I grew up listening to a lot of their music.

So this was a moment for me to have that chance to do some of the songs that inspired me when I was trying to get into music. So I got to have my moment of recreating some of those vibes that inspired me to get into music, but it's also authentically Yandel. So that's what made it special that we got a chance to get into this time travel moment and just go back for a little bit. And also go a little bit in the middle, like 2008, 2010, and just see how we sounded and how we can bring that into today and see what else we can do. And I think we did a pretty decent job of just within 8 tracks, showing you that span of years.