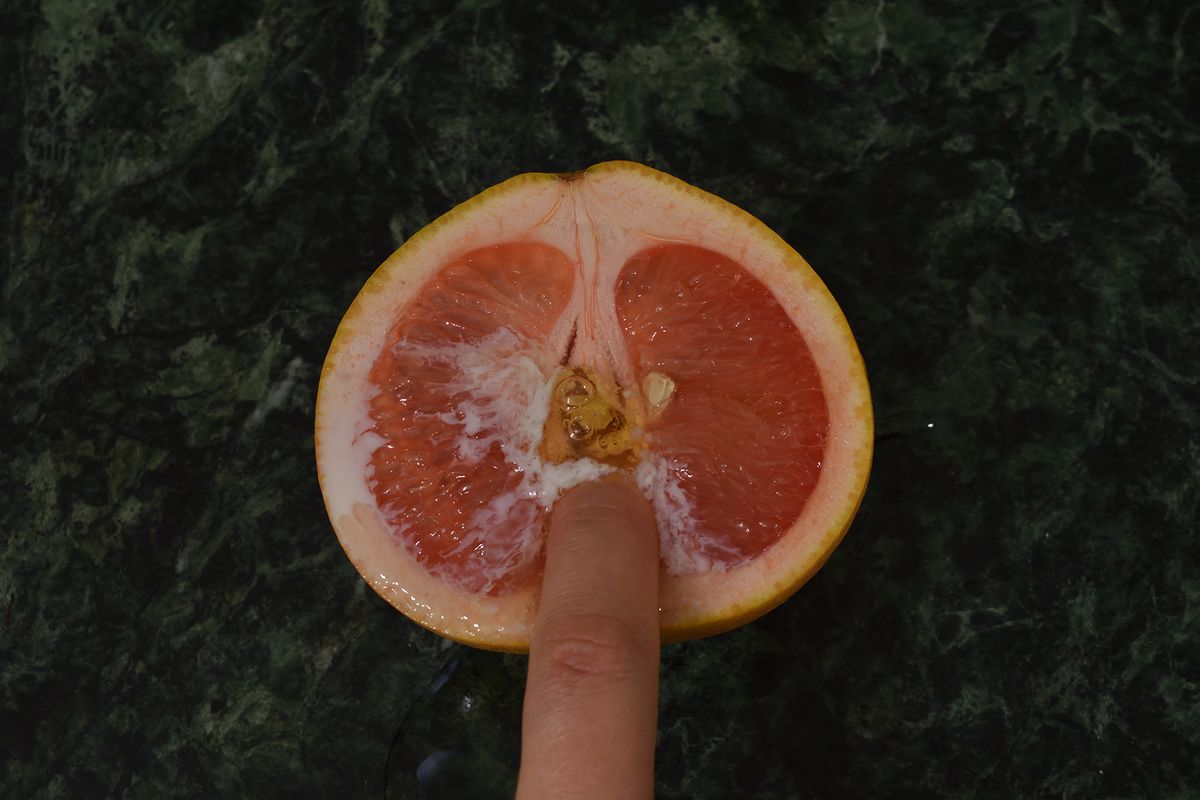 An expert illustrator, Sarley found her start in sex-positive art, which subsequently meant a whole of censorship (as it turns out, the masses can't really get behind sketches of vaginas sipping a cocktail). Sarley has had her work removed from café walls, and her Instagram account — which has amassed a following of several hundred thousand — deleted. She has been copied and called-out, all as a result of her fruit fingering. To be fair, Sarley's extremely visceral, and well, sexual. You can watch her spank and tip (yes, tip) a pumpkin, go Call Me By Your Name on a peach, jerk off a cucumber and fist fruit salad. Each piece is hilarious and poignant, and might even leave you a little turned on.

The artist is currently showing alongside Instagram stars, Juno Calypso, Arvida Bystrom and many other female artists at the Museum of Fine Arts in Leipzig, Germany, and is also set to exhibit at the Museum Jan Cunen in the Netherlands later this month. PAPER caught up with the Bay Area-based artist to chat all things sweet and sticky.

It was really spontaneous. It was an expiration of an impulse that was just in the moment. I filmed it on my cell phone because at the time I was just posting on instagram and experimenting with new ideas and that was something that just came to me . Like let's finger this blood orange. It wasn't something I conceptualized and wrote down for months like I'm going to finger a fruit. So when it happened it was really residual and really emotional.

You kind of make them seem like a living organism just by way the way that you touch them.

Yeah, the play of perception is something I like to try to master. Like how are people's perceptions and how our imaginations are ignited. That's how I work when I'm looking around the supermarket or when I'm looking at my materials in the house. How can I look at this differently? Then, my imagination takes off. That's really what's at the root of all of this is an imagination.

That was inspired by the fact that the imagery of the vulva, throughout history has been frowned on. Then, when people do come out with a series often it's gross or something, or the imagery has to be censored. At the time I was being censored a lot for my representations of vulvas that were illustrated or painted from Instagram. So, part of that inspiration for that new experiment was the censorship I was experiencing. It was really getting to me. So I was like, I'm going to use this new approach and it's not going to be censored.

It ended up that my account still got taken out anyway. It was years ago though, I haven't had problems with censorship since I filed a formal complaint to the Better Business Bureau. Instagram actually had to respond to The Guardian when they asked for a response in 2016, as to why they were deleting an artist's work. It was just representational. They basically responded with kind of a lie saying it was a mistake but it's restored now. Ever since then I haven't had any problems. I think Instagram knows who I am now.

Are you noticing imitators?

Well imitators are apart of the game. People imitate people who are influential, and that's okay. Really the problem is when they are actually taking my videos and slapping an ad over it or over my images. That's when I put my foot down. You have to separate the two because they're not the same. There are people in the art world that are imitating me and it does get to me, but at the same time I'm currently in a museum in Germany. That justifies it. I don't need to be mad about a person copying me for a reason.

Is it flattering in a sense?

No, it's not a compliment. The thing is copyrights are practically dead in the fine art world and it's something I've had to come to terms with. I've had so many problems with just copyright infringements technically that I don't even need to worry about the imitators anymore. A lot of those people are my fans, and I get a ton of messages from fans studying me. They'll send me a painting they did of my picture and I'm super flattered. I love what they are doing with it because if anything it helps establish that what I am doing.

The work is obviously is so meaningful, but when you started out did you think about it in those terms? Like this is really sex positive, or making a larger statement about how society relates to touch and elements of sex?

Well I was already on a journey. I was doing a lot of work revolving about your body, how you perceive yourself and exploring photography and paintings. Then I did the crotch talking series, which was talking crotches. I don't know if you ever seen those but they're on my Instagram. I've always done drawings and paintings and sculptures but when I really started to explore my sexuality in art was around 25 I think. I'm 29 now. So it's been a few years that I've been doing themed work around my sexuality and women's sexuality because that's my experience. It developed from there.

I read that you find citrus the most sexual fruit. Why is that, because they're so juicy? What's behind that?

It's really fun to experiment the textures of it. It just squirts. Not only does it physically represent what I'm trying to say when it comes to the (?) symbolism. As we know, it looks a lot like it. When I'm trying to do my most sensual work, I use the citruses because that does definitely rub up close on like what it really looks like. And also at the same time if you keep doing it, like lemons are really funny. You know, I had one lemon squirt once, it's one of the early lemon videos that I did.

I think I saw it, and it squirts like so intensely right? Like on the camera lens?

Yeah, it was on camera, and when that happened, I wasn't planning that at all. It was really funny.

You gave a lemon an orgasm.

There's so much sexual energy in every piece.

Totally. Especially some of the ones that are more sensual, there's definitely sexual energy that is being channelled there. At the same time when I'm doing my work, a lot of it is a play of the touch, the feel, the experience, and the smell, and the squirting. It's almost like a visual experience for me but it doesn't feel sexual when I'm doing it. It feels like I'm making art because it's a process I've developed as if I was opening up a sketchbook. That's how I look at it now. When I look at a fruit I think is it physically fit for what I want? Is it the shape and has the uniqueness I'm looking for in this piece? I also approach it with different materials. It's actually become quite technical. I film it with a nice camera and tripod. It's become an art form for me.

You say that art students hit you up and reference you as an inspiration, but do you get any other kind of wild DMs? I can only imagine.

I mean, I get the weirdest messages. I do get some really weird shit. Obviously, a lot of them are going to be from guys. I'm trying to think about what I want to share, because honestly there are so many fucked up ones. I just get a swim of creepy messages from guys who don't get my art. Or I'll get bullied. This guy messaged me the other day and was like, "What fruit should I use for a male experience?" And then afterwards, he was like, "Asking for a friend."

There is something to bizarrely empowering about it. I honestly, no pun intended, can't put my finger on it. It's the shock to the senses, because it's obviously something that's, on a day-to-day scale, so desexualized. And to see it in this context, is to draw attention to the fact that women are way over-sexualized and objectified.

I'm fascinated to hear your perception on it. I'm a feminist 100 percent, I want people to experience my art, and I'm open to their interpretation of what it is.