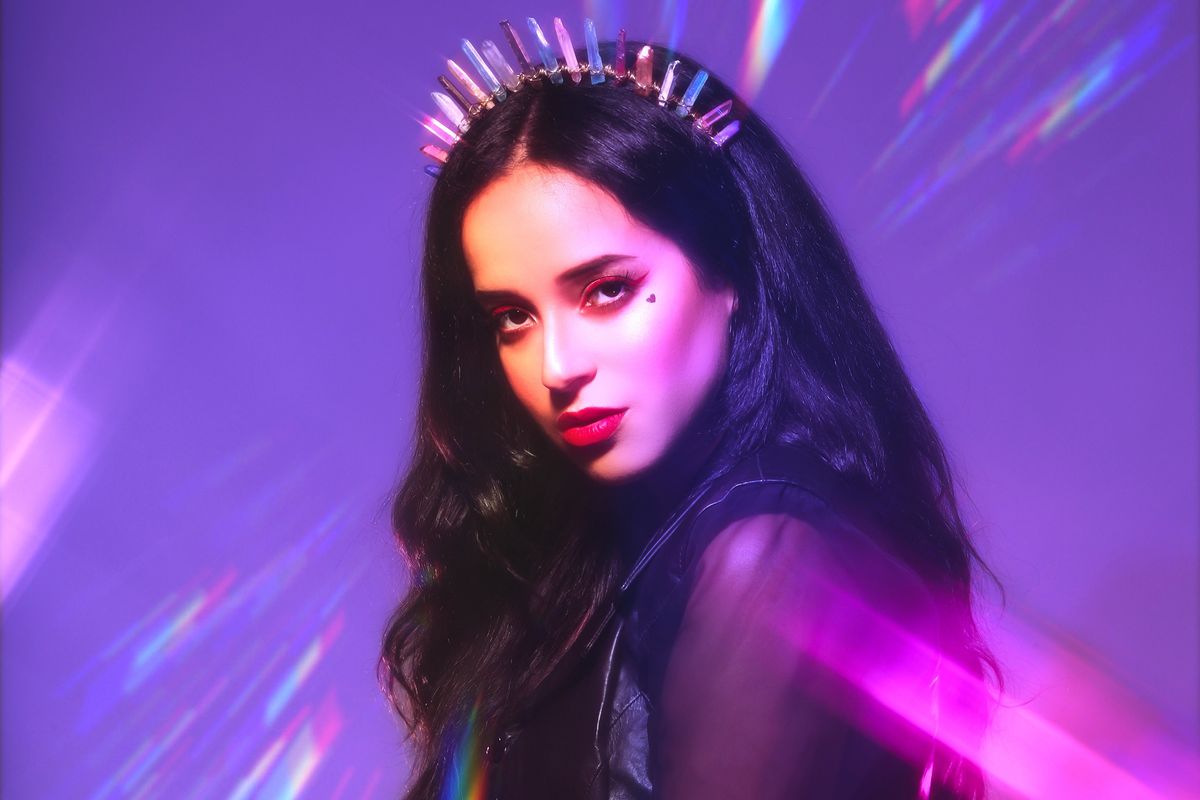 SnowBlood Presses on With 'Into Your Heart'

SnowBlood, the artist persona of former Millionaires member Dani Artaud, is a bubbly, synth-pop heiress. She's making a comeback that's almost unheard of; as PAPER reported back in April, Artaud is going on tour as SnowBlood this summer in her first solo effort. She's worn many hats in the industry — from the 2000s glam pop of the Millionaires to her indie pop-rooted duo Mr. Downstairs — but she's finally ready to bring her star power front and center.

Her new song, "Into Your Heart," is a far departure from Dani's previous ventures in creating and writing. Her voice shines and is bolstered by a heavy dance instrumental, one that encourages dancing to its fullest extent. In the video, footage of the Spice Girls is spliced between different frames of her dancing, bopping up and down in the same way that one might have in their bedroom to their Spiceworld CD.

The track continues the revival streak of #20NineScene, a welcome movement online that's ushering back in the stars and themes of the 2000s into the new age. There's not a lot of people in the world who can continue on for years and years performing after their initial rise. Artaud couldn't be more excited for the new era recalling to PAPER in April, "Somebody the other day was sending me videos of Millionaires on Warped Tour, and that was literally 10 years ago. So 10 years later, I'm finally playing as a solo artist. I'm so stoked."

We couldn't be more excited either, because who doesn't need a refreshed dose of sparkly MySpace stardom in their life? Listen to "Into Your Heart," below, and read Artaud's full interview with PAPER about touring as SnowBlood, what sounds she's excited to explore in her music, and how she thinks her sound has changed over time.

What's the story behind "Into Your Heart"?

"Into Your Heart" is a really special song to me. It's completely different from any song I've released so far as SnowBlood, both in the writing process and sonically; for that reason I almost didn't release it! My debut self-titled album, released October 2017, has a very distinct sound that I was afraid of straying too far from. But over time, I've realized I mustn't limit my art. I want to be free to express any emotion or sound with my music and not just one style or genre. All the lyrics and melodies for this song came to me while I was taking a shower! Normally I write all my songs to tracks. This is the first time we — producer Mystery Skulls and myself — composed a track around a song I had already written, which was really fun and freeing.

What about upbeat pop music attracts you to it as a genre/medium?

It's funny, I listen to a lot of really chilled out music, but I honestly can't help making upbeat dance songs. It's an entirely different mood that forces you to listen and just let yourself go. When I'm writing any song, I always imagine how I would feel performing it live on stage. And I always imagine getting the crowd off their feet and dancing with me. I'll actually be performing a full set live for the first time this summer supporting Mystery Skulls and Phangs; 30 shows across the US and Canada. I'm super excited to get back out there and perform my songs for the first time, plus some new unreleased material as well. it's definitely going to be a great tour and everyone should come! Ticket link is over at SnowBloodUniverse.com! Am I plugging hard enough?

What kind of music do you want to keep making?

Genre-spanning pop music! Those who have followed my whole career know I started in more of a rap world, then indie pop, and now synth heavy electronic music. I can't wait to evolve even more as SnowBlood! When I first started this project, I imagined it would embody my true Gemini essence, embracing multiple sounds in perfect harmony. I want to continue experimenting with sounds and then listen to my audience — see and hear what songs they connect with most, and make more of those. That's not to say I won't be making more songs with my original sound from my album, because I definitely will, but I look forward to experimenting more and keeping my releases interesting, like, you never know what you're going to get! But whatever it is, it will be some version of maximalist pop, cause I just can't help myself.

Has the message you're trying to get across in your music changed over time? Why or why not?

Well, if we're going as far back as Millionaires, I would say yes it has changed quite a bit. Even so, no matter what I'm singing, I always try my best to exude love and choose topics people can connect with. Although my sound may shift, my intention is always the same: to make human connection by spreading love, positivity, and understanding. I want listeners to feel empowered when listening to my music, while also embracing their fears and insecurities. There's so much negative energy in the world as it is, I have zero intention of creating more.

"This song is my homage to the '90s golden age of pop music."

Why did you splice the video with Spice Girls footage?

Because they're the best. "Into Your Heart" is strongly tinged with a '90s pop sound, and that was very intentional. Growing up, I was very lucky to have a family who embraced all kinds of music, ranging from oldies, disco, classical, salsa, and metal. It wasn't until I heard pop and dance music in the '90s that I really, really fell in love with music and was inspired to be a pop artist one day. I remember the moment I heard "Wannabe" by the Spice Girls and I was forever changed. This song is my homage to the '90s golden age of pop music.