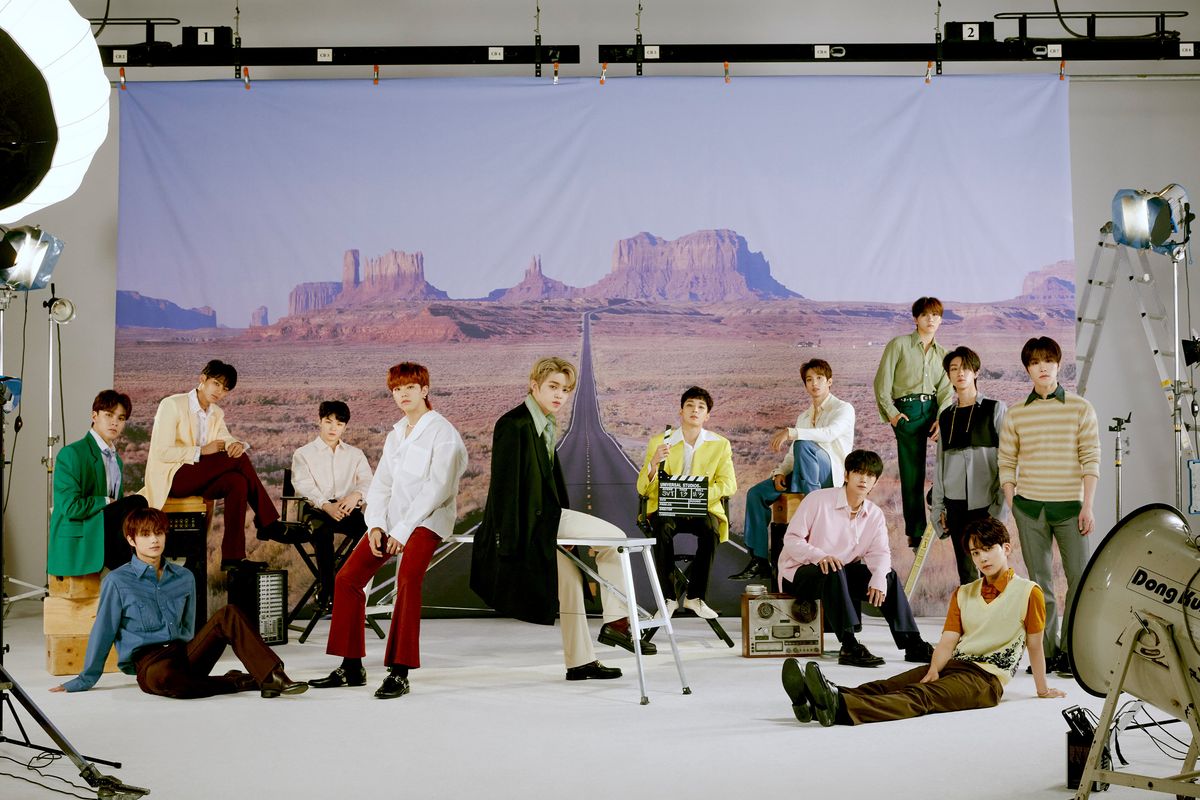 Five years have passed since SEVENTEEN made their bold debut into the K-pop world, so a four-month hiatus should feel like nothing in the group's tenure as pop stars. But it hasn't. Rather, the short break from SEVENTEEN's regular drops, performances and consistent fan interaction since the release of seventh mini-album Heng:garæ has felt, especially to some of the band's CARAT fandom, like a respite worthy of a triumphant comeback.

Fortunately, the group is delivering just that with ; [Semicolon], the latest addition to their compilation of special albums.

The 13-member band — which consists of JOSHUA, THE8, VERNON, JUN, HOSHI, S.COUPS, WOOZI, JEONGHAN, DK, WONWOO, MINGYU, SEUNGKWAN and DINO — released Heng:garæ in June of this year, followed by their Japanese comeback 24H in September. Dropping new, quality records at the rate that SEVENTEEN does is certainly no easy task, but the odds are high that this year's unprecedented obstacles created similar challenges for the group as they did for other musicians across the globe.

In June, South Korea faced an impactful second wave of COVID-19, seeming to cement the uncertainty of the music industry's future. But SEVENTEEN's recent discography makes clear that they won't be stopped; while the vision of touring in coming years remains hazy, fans internationally are not likely to miss a beat of the work that SEVENTEEN has put into making this era, centered on pause and youthful enjoyment — one of their best.

Though this break was not a lengthy one for SEVENTEEN, some members still opted not to take the time off entirely. WOOZI explained that the four months away, at least for him, were still musically productive ahead of the release of ; [Semicolon]. "I stayed busy working on music," WOOZI told PAPER. "I didn't really take a break despite the hiatus."

Alternatively, some found solace during the hiatus in other work, from collaboration to self-reflection. Members JOSHUA and DK can be heard on the remix of "17," the hit track by Pink Sweat$, while HOSHI took time "for self-development" while working on the SEVENTEEN's EP.

Each of the members' experiences over time, ranging from a drive to create to finding identity within the band, fits almost like a puzzle piece with the theme of their newest group venture. ; [Semicolon] is somewhat of a continuation beyond Heng:garæ's message, this time focusing on the meaning behind a semicolon for the younger generation, asking them to take a break and celebrate being young.

"Rather than influences from our personal experiences, I thought that our experiences as SEVENTEEN, consistently moving forward and attempting new things, defined youth itself," MINGYU said. "I feel like I'm living my youth this very moment. I hope to deliver a message of strength to the exhausted younger generation through ; [Semicolon] in addition to Heng:garæ."

The title track, "HOME;RUN," is an exciting, explosive reintroduction to SEVENTEEN's core message. Not only does it provide an upbeat, swing vibe that sets the tone for the rest of the album, but its visual stuns with a concept that plays out like a heist and features smooth yet fast-paced choreography to showcase the group's strengths. Additionally, bringing in all 13 members to be featured in "HOME;RUN" acquaints fans — new and returning — with the group in the opening to a strong comeback.

"Our last album, Heng:garæ, suggested a direction of journey for the younger generation," WOOZI said. "In ; [Semicolon], we wanted to talk about taking a break before continuing on one's journey. We hope that listening to our lead single will allow listeners to have fun, blow off some steam and take a break. It's why we chose swing as our genre. It would mean so much for us if everyone could have fun, be happy and carefree while listening to 'HOME;RUN.'"

The four tracks following "HOME;RUN" offer a truly vibrant, new perspective on this youthful theme. Many SEVENTEEN fans know that, regularly, the group is broken into three main units: Hip-hop, vocal and performance (though DINO says the group members "spend a lot of time together" regardless of unit breakdown). The divergence from this typical unit model is just part of what makes ; [Semicolon] such a special addition to SEVENTEEN's catalogue; this time, the members split into units loosely based on their birth years, creating age-lines that showcase various childlike perspectives.

"Rather than influences from our personal experiences, I thought that our experiences as SEVENTEEN, consistently moving forward and attempting new things, defined youth itself." —MINGYU

"As we wanted to show more diverse colors as SEVENTEEN, we decided it could be interesting to work in units based on age," HOSHI said. "I hope listeners will be able to feel each member's unique charm through the various songs in this special album."

Each of the songs intends to develop snapshots of adolescence throughout the tracklist. The first of the age-line tracks is "Do Re Mi" — a vivid hip-hop and pop blend that feels, in many ways, like a throwback boyband hit. And the optimistic vibe is intentional; VERNON explained that "Do Re Mi" is the product of the desire to create a track "with a positive and practical message" in the age-line of himself, SEUNGKWAN and DINO.

The second, "HEY BUDDY," focuses on the strength of friendship; it is the 1997 age-line song featuring DK, MINGYU and THE8. According to DK, live shows were kept in mind while producing the high-energy dance track. "The word 'friendship' first came to my mind when I thought about the three members," DK said. "We enjoyed the song-making process a lot; we imagined performing on stage and having a blast and this enjoyment really influenced the song's theme and lyrics."

"Light A Flame" is the fourth song on the record, and it positions itself as the most mature sound on ; [Semicolon], influenced by the Bossa Nova genre from mid-1900s Brazil. According to WONWOO, both WOOZI and producer BUMZU were prepared to create the song with the Bossa Nova influence and theme in their back pockets; but it may be the unit's personalities, made up of WOOZI, WONWOO, HOSHI and JUN, that sell the song as a potential standout.

"The 1996 age-line members possess a diverse range of colors, and I thought the sexy concept, among many other charms that we're able to express, best-represents this group at this point in time," WONWOO said.

Meanwhile, the final age-line song, "AH! LOVE," performed by the unit consisting of JOSHUA, JEONGHAN and S.COUPS, nearly didn't make the cut. JEONGHAN explained that the group listened to three different options for their unit's track, considering what would "best deliver new and unique sentiments" to their fans. And that it does — the track combines elements of jazz, funk, R&B and hip-hop to create an acid jazz-inspired addition to ; [Semicolon].

"All My Love" brings SEVENTEEN back together again in the sixth and final track, forming a striking finish to the genre-blending, special album that pushes what listeners might expect from the band. Their growth is evident, and this evolution is one that fans will see even more prominently in a live setting. "We feel a little more relaxed up on stage," JUN said. "We're not perfect yet, but we feel like we're getting closer to the point of being perfect."

Though their range as a group certainly earns them a spot among the surge of global popularity, SEVENTEEN recognizes that the success from ; [Semicolon] — or any of their musical ventures, for that matter — exists in part because of their CARATs. In similar fashion to BTS' ARMY or BLACKPINK's Blinks, CARATs show avid support on social media, and SEVENTEEN uses Weverse and V Live to keep the conversation going.

While that interdependence between band and fan is important, a connection to the music is a necessary foundation for that relationship, and ; [Semicolon] intends to provide just that with a message for CARATs to live by. THE8 described the strength of that bond, likening a fan to a friend. "To SEVENTEEN, CARAT is like a reliable friend — a precious being walking the same path with us," THE8 said. "We tried our best to express SEVENTEEN's charm and we're thankful that CARATs appreciate it as much as we do."

"We enjoyed the song-making process a lot; we imagined performing on stage and having a blast and this enjoyment really influenced the song's theme and lyrics." —DK

Much like their CARATs have grown since their 2015 debut, SEVENTEEN has evolved in sound, maturity and closeness as a group since their first EP, 17 Carat, and they are ready to bring forth that development in a continuation of an era grounded in the excitement of being young. While ; [Semicolon] is designed as a comeback, SEVENTEEN's message never seemed to fade, and the next era may be just as enduring.

"Whenever we do something, we try to have a mindset like, 'It's just the beginning,' rather than, 'We've come this far,'" JOSHUA said. "We hope to express what we've prepared so far in a variety of ways in different environments."