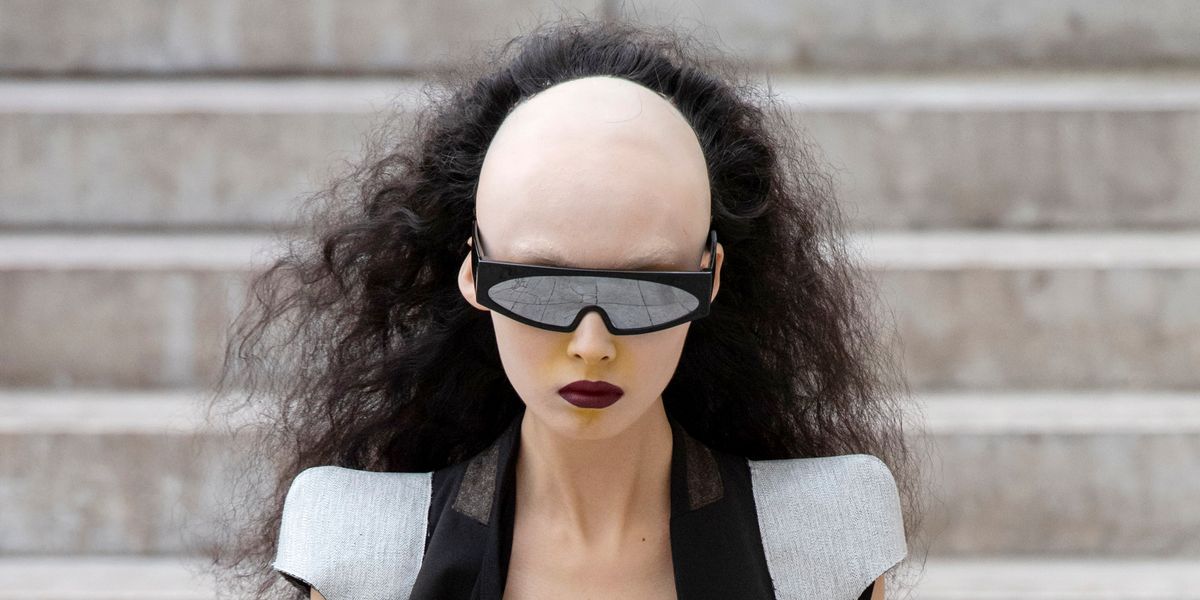 Another day, another mega designer stealing from a young artist. So commonplace is the practice that there's an entire Instagram account dedicated to calling out high end brands for stealing ideas. This season, it's Rick Owens who has come under scrutiny.

At the Palais de Tokyo at Paris Fashion Week, the designer sent out models in a range of of geometric headdresses and loose robes. While he was praised for his designs, it was really the awkwardly contoured faces and bald caps that took the cake for creativity.

Fashioned by makeup artist Karim Rahman in conjunction with FX artists and British hairstylist Duffy, the primary source of inspiration was Salvia, a 19-year-old artist who first shot to fame after working Owens' show last season (or so Rahman alluded to in an interview with Dazed).

Now, Salvia is claiming that she was in fact never consulted about the show nor asked for approval to use her ideas. "Rick Owens decided to send replicas of me down his runway 3 days ago, without my knowledge, involvement or payment," she wrote in an Instagram post.

She continued: "This is not the design I sold to him in February which consisted of one prosthetic design and one makeup design. I didn't even want the models in the February show to look anything like me, I wanted to design something unique and new but him and his team just wanted to take things from my instagram. That collaboration was not permission to use me as a muse forever, and I have had my hair, nails and other makeup looks stolen by him since. I thought we came to an agreement that this wouldn't happen again when I spoke to him about my look being used for a shoot in his studio for @crfashionbook which happened again without my permission or involvement, in this shoot makeup styles were pulled from my Instagram - and had nothing to do with the February show."

Prosthetic facial protrusions, hairlines that recede mid-scalp, and blackened out eyes have all become the young artist's style signatures, most notably across her Instagram. And although her aesthetic is distinct and unique in itself, several other artists including the likes of Canadian designer duo Fecal Matter have been showcasing identical looks across their own social media.

"You may say I'm not the only person who 'does this look' but that's because rick isn't the only person relentlessly stealing, but that's another can of worms," Salvia added in her post. "He has endless privileges and resources, I do not, I'm not a millionaire with a team of people behind me, I'm a 19 year old trans girl from cyffylliog, Rick Owens is not punk, not progressive, not futuristic, he is selfish and mediocre."

The artist further added in comments that Owens refused to address her partner with their preferred pronouns."[Owens] also refused to use gender-neutral pronouns for my partner because he's 'too old,'" she said.

Neither Owens nor his team have issued official comments on the matter, and Owens did not respond to a request for comment for this story. Salvia has received an immense amount of support from both friends and followers. "This is horrible and unacceptable I am so sorry," artist and activist ALOK wrote in comments. "Give it up to corporate fashion to see a young adult being original and immediately capitalizing off art theft," another follower added.