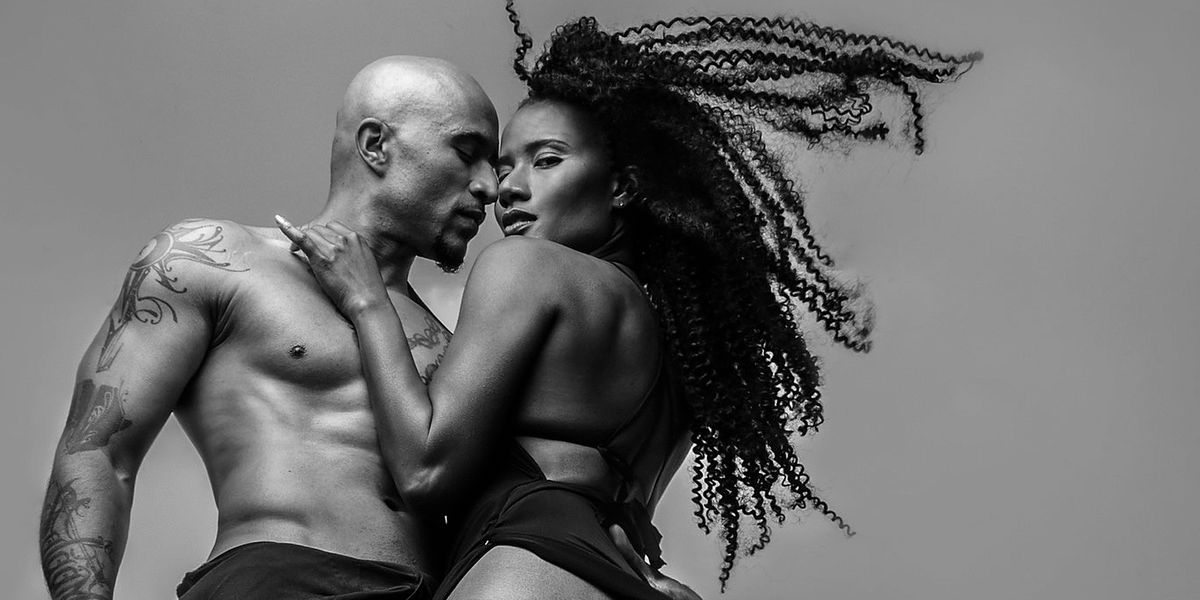 Royal Fetish's productions tend to focus more on passion and foreplay, all while showcasing sex that isn't hinged on harmful stereotypes or pigeonholing. And sometimes achieving this is as simple as just letting people be themselves — whether that means allowing models to speak normally or encouraging Black performers to incorporate things that "highlight our culture, like waist beads or headwraps or ankhs."

"We would never tell [a performer] like, 'Hey, the jewelry you're wearing is too cultural. Please leave that out,'" King added. "We also don't ask people to speak in a way that they wouldn't naturally speak. For example, we were talking to a performer that's Asian and they were telling her to not speak clear English. We're not here to try and sell a caricature. We're here to actually show people having the sex that they enjoy, but showing how beautiful it is at the same time."

He continued, "A lot of these really extreme racialized fetishes are a white person conquering these other people sexually. They're never like, 'I love Black people because of their ability to overcome obstacles.' It's always like, 'No, I want to fuck Black people, because they have this body part. Or, I want to fuck Asian people, because I think they're subservient to white people. It's always that conquering involved in it."

But in terms of porn's continued perpetuation of these fetishes, King went on to say that a lot of it can be chalked up to the industry itself cashing in on this content as a way to recoup the losses they incurred from the shift to online.

"You do need to take the time and talk and ask and reassure and check in. Because we have been an abused people, and continue to be."

"No one wants to talk, fix or improve the guilty pleasure. It's a guilty pleasure for a reason, right? And in order for me to fit in and improve, it would mean that I have to fix and improve the issue that I have within myself," she said. "But that's exactly where it stops. With like, 'Oh, god, this is horrible. But who do I tell about it, because if I tell someone about it, then they know I watch it.' Or, they're talking about fetishization, and 'I wouldn't like that and I don't want them to take that away from me. So I'm just gonna silence that. I'm not gonna talk about that.'"

"A lot of these companies are like, 'Oh, shit, we're not racist. We posted Black Lives Matter and now we're good.' Meanwhile, the name of their company is Blacked and it's saying that fucking Black people makes you somehow 'tainted.' Or you're Dog Fart and you've been making the most racist shit ever for the last 10 years. Or you're BangBros who owns Black Patrol," he added.

"You're not understanding the ramifications of what you're putting out there," he said. "You're trying to capitalize on it, so a lot of these companies are not trying to get any better. They're hoping that this will blow over. Or they'll just want to pick up the group of people that are still racist, that are still looking to buy racist ass porn. And they know that because of the lack of opportunity for Black people in our industry, there's always going to be somebody who needs to pay the rent or needs to eat, so they're willing to take a fucked up scene."

Like other forms of media, Jasmine — who also has a background in psychotherapy with an emphasis on intimacy and post-intimacy trauma — said that ensuring there's also representation behind the camera will go a long way in terms of creating a safe space with a level of cultural sensitivity toward BIPOC talent, particularly Black performers.

"There is a high turnover rate for people in industry, especially for Black and brown performers because of that pigeon hole that we get placed in."

"[Especially when productions are rushed], things are not taken into consideration. Like, the type of care our people need. Or why something may take a little longer for somebody who comes from a history of being objectified. That they might need to get into a safe space," Jasmine continued.

"And I'm not saying you have to take a long history lesson, or do a long Black history lesson to shoot Black people, but you do need to take the time and talk and ask and reassure and check in. Because we have been an abused people, and continue to be. That level of cultural sensitivity I think is missing," she said.

At the end of the day though, these are all things that Royal Fetish are trying to address — and they're doing so by leading through example. And the next step? A documentary porn film about a recent all-women production helmed by Jasmine, which will give insight into how exactly they construct a scene with the tenets of consent, passion and kink in mind. And in line with this ethos of visibility, Jasmine and King are also in the process of making an animated video called "Poly Sutra," in which you're able to see "Black and Brown bodies enjoying kink in its fullest expression."

Related | Psychic Sex and the Art of Connecting With Future Lovers

"There is a high turnover rate for people in industry, especially for Black and brown performers because of that pigeon hole that we get placed in. And you can only deal with that for so long, especially at the expense of your body and emotional labor. The expense of the sacrifice you make from your friends, your family and all of the things that come with this stigmatization [of sex work]," she explained, as she detailed the wide set of skills many people don't necessarily know that they have.