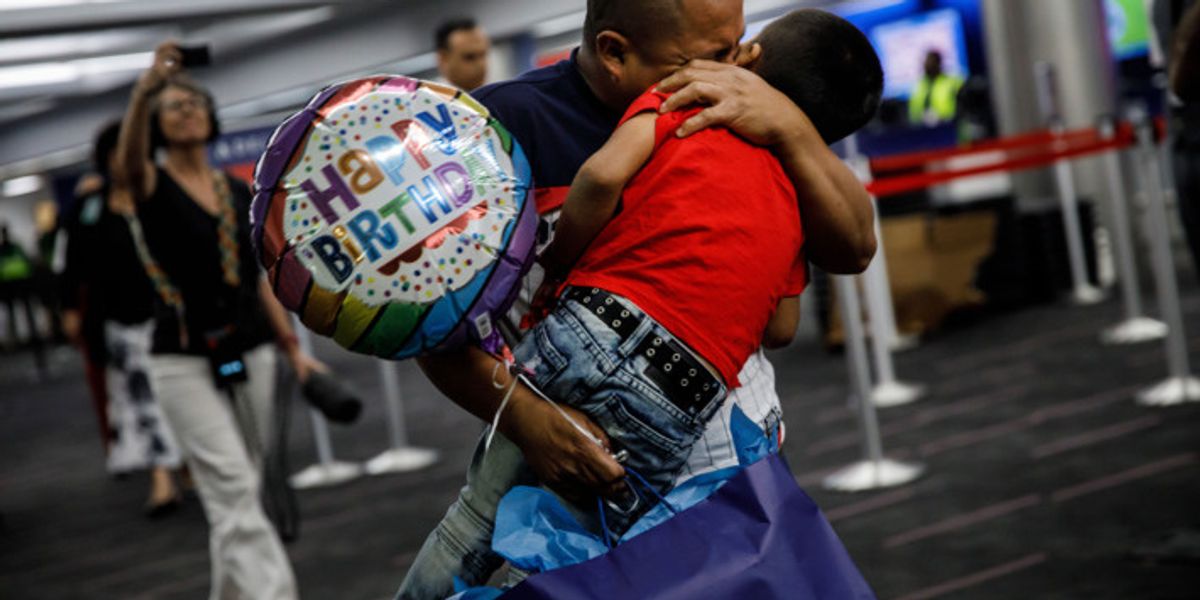 Report: 463 Migrant Parents Are No Longer In America

The deadline to reunite separated migrant families is July 26.

On Monday, the Trump administration reported that almost 1,200 family reunifications had taken place, according to TIME. The reunions affected children aged five and older, who were forcibly separated from their parents at the U.S.-Mexico border following the administration's "zero-tolerance" immigration policy.

Note that this total estimation is barely half of the 2,551 children five and older who have been separated from their families. Of the total amount, the court-imposed deadline for all reunions—handed down by U.S. District judge Dana Sabraw—is this Thursday, July 26.

Breaking the numbers down further, New York Magazine reports that in a Monday court filing, the government claimed that so far, 879 migrant parents have been reunited with their children. A remaining 538 parents have been approved for reunification, and there are more than 450 who are deemed ineligible, due to criminal records, carrying diseases, and the need for "further evaluation," whatever that means. Also in the court filing, the administration admits that 463 parents are no longer in the U.S., possibly due to deportation, which of course means that they are not eligible for stateside reunions with their children. Needless to say, the administration's Thursday deadline will most likely be missed.

Doing their part to ensure no stone is left unturned, the ACLU filed a separate motion, asking Judge Sabraw to order the government to make available a list of parents who actually agreed to deportation without their children. "These parents urgently need consultations with lawyers, so that they do not mistakenly strand their children in the United States," the filing said. Migrant children need lawyers, too, as it has been reported that children as young as three have been forced to appear in court proceedings alone.

This follows previous reports that ICE officials pressured migrant parents into signing voluntary forms for deportation, telling them that it's the only way they'll see their children again. Former ICE director John Sandweg said last month that he believes that hundreds of cases will likely occur "where children are permanently separated from their parents, becoming wards of the United States."

While there are stories of parents who did decide to leave the country without their children, it's hardly because they feel separation itself is in their child's best interest. José Ottoniel was deported back to Guatemala in June, leaving behind his 10-year-old son in a Texas facility. "Right now, we think it's best for him to have this opportunity in the United States, to get out of this place," Ottoniel told the Washington Post. "It's not that we don't love him," he added. "It's that we want him to have a better chance at life."