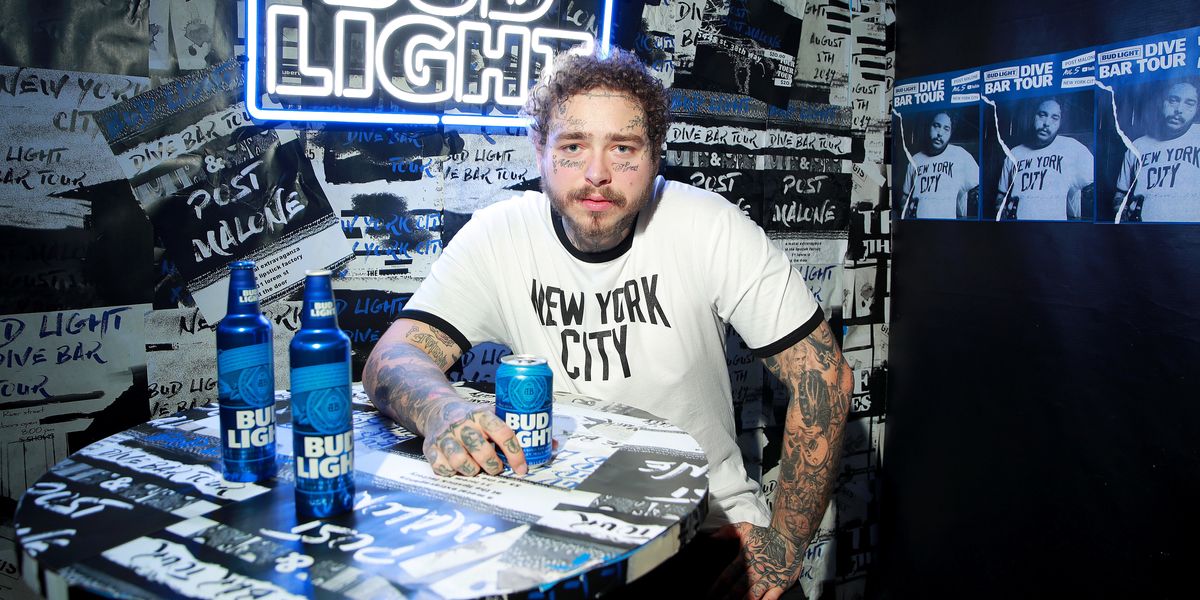 Post Malone on His Perfect Partnership With Bud Light

On August 5, fans lined up on 32nd St in New York outside The Cutting Room, a dive bar-slash-music venue, to see Post Malone perform with Sublime with Rome as his backing band. The "Rockstar" singer, who deftly defies genre despite consistent attempts to lock him into one label, was posted up in a tour bus double parked outside the venue, which streams of cars edged around in the early evening rush hour traffic. The brightly lit bus was filled with kids in their very early 20s, smoking cigarettes, drinking beers and generally kicking it while Post and friends played beer pong in the back.

The Bud Light Dive Bar Tour series is known for putting mega stars like Post in super intimate venues to connect with fans in a way they might have when they were on the come up. (Lady Gaga is a past performer). Post played in Nashville last year, and given his demonstrative love for beer and Bud Light in particular, the exquisitely matched partnership also now includes a mythology-themed merch collaboration featuring some of Post's favorite things, like dragons, swords, cowboys, his tattoos and some of his lyrics. Post is poised to cross the threshold into verified style icon after years of being (mostly lovingly) roasted for his style. His recent collaboration with Crocs sold out almost instantly.

Speaking with Post, or Posty as nearly everyone in his professional orbit affectionately calls him, in between shots, he admitted he was a little nervous for his show. Given his experiences traveling the world as an opener for Justin Bieber's massive Purpose tour, not to mention playing stadiums of his own, it was surprising to hear the Texas native say he was drinking to calm his nerves.

Related | Post Malone on Memes, Bieber Fans and the Importance of Beer

"It's very personal, you can see everyone there. It takes me back to playing little acoustic shows," he said, before agreeing that there's no better feeling than hearing fans singing back your lyrics to you (but being close enough to see them is a little different). "That's definitely the best part," he said. "That's also the most nerve-wracking part, because you know whenever you got huge lights set up all over you, you can't really see all the people. Whenever you can see them and they're all staring right at you, it's very nerve-wracking. That's why I'm playing so much beer pong."

It turns out he had little reason to be nervous at all, as a screaming crowd greeted Post the minute he walked on stage in a hand embroidered jacket, curly hair frizzed in the hot and sweaty room. Post announced his third album will drop this September before bringing NYC legend Fat Joe on the stage for "All the Way Up" and "Lean Back," and playing Santeria with the absolutely ecstatic Sublime with Rome. In between songs, including his new track with Young Thug, "Goodbye," and a run through of hits like "Congratulations," "Sunflower" and of course "White Iverson," Post riffed with the crowd and even handed out beers. He didn't flinch when a bra went flying at the stage.

"I'm just a guy," he said before the show. "I have really beautiful blue eye, but at the end of the day, I'm just a guy. I'm just joking."