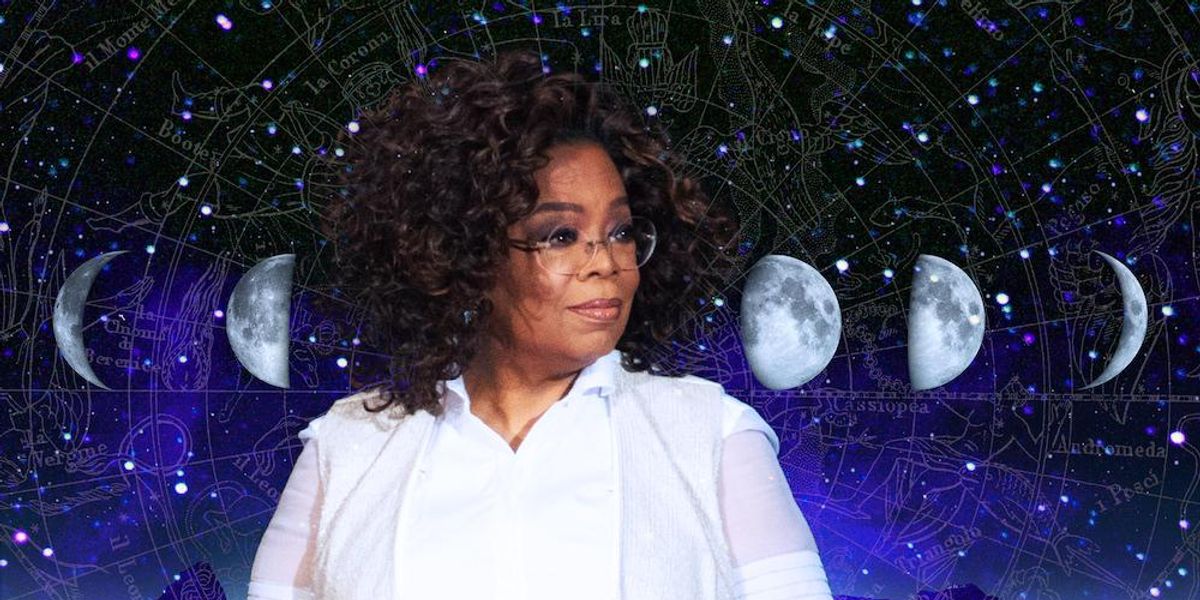 The Astrology of Oprah

You know Oprah Winfrey as a talk show host, author, actress, television producer and philanthropist. She made headlines this week with one of her trademark celebrity interviews, scoring an exclusive sit-down with Meghan Markle and Prince Harry about their post-Royal lives. She has received an abundance of accolades and has acquired massive amounts of success throughout her life. However, it hasn't always been this way.

Oprah grew up in Kosciusko, Mississippi, in a household where her feelings and emotions were overlooked and ignored. She was also physically abused at the hands of her grandmother. "I was beaten, but I was never allowed to have any emotion about it," she once recalled.

Oprah's tumultuous childhood is reflected in her having Aries in the fourth house, which represents our household environment and our family dynamic. The ruler of her fourth house, Mars, is sitting in the 11th house and is in a challenging square aspect with Pluto. Mars is a planet that can represent anger, violence, physical assault and negligence. Pluto is a planet that can represent destruction and chaos.

"Aspects" in astrology refer to the angles and energies two planets have with one another. Square aspects are challenging and difficult to deal with as they can create unfortunate circumstances, especially if a square aspect is situated between two malefic planets. However, you can overcome the challenges that square aspects can bring through hard work, persistence and diligence. Malefic planets in astrology refer to planets that can bring us unfortunate luck, disappointment, discomfort and hardship. Malefic planets in Astrology include Mars, Saturn, Uranus, Neptune and Pluto. However, some planets are more malefic than others.

Oprah was not doomed to have a chaotic home environment forever. Mars is in her 11th house in the sign of Scorpio, in a harmonious sextile to her North Node. Mars is a planet that also represents our action, determination and motivation. Scorpio energy represents rebirth, transformation and power. The 11th house is the house of our hopes, our wishes, our dreams, material gain and financial gain. When Mars comes into the 11th house in the sign of Scorpio, it gives you the motivation and drive to acquire your goals. Mars in Scorpio in the 11th house gives you the ability to transform yourself for the better through hard work and being intensely focused. Furthermore, Mars in Scorpio in the 11th house can help you to acquire an abundance of money and material abundance that can transform and change your life.

Oprah's North Node is in her first house in the sign of Capricorn. The North Node represents our life purpose, our destiny and what we find ourselves intensely focusing on in this lifetime. The first house is the house of our identity, and how other people perceive and view us. With Mars being in a harmonious sextile to her North Node, this indicates that it was a part of Oprah's life purpose and destiny to become the best version of herself through her hard work, diligence and tenacity. Furthermore, this aspect indicates that it was a part of her destiny for other people to view her as a hardworking, motivated, determined and inspirational person.

Related | The Astrology of Daft Punk's Break Up

Oprah's hard work, diligence and tenacity helped her to land her first job as a news anchor at 17 years old in 1970. She ended up working with a local radio station for three years while studying communications at Tennessee State University. In 1970, Oprah had Jupiter transiting her 10th house in the sign of Scorpio. Jupiter is the planet that represents good luck, abundance, and good fortune. The 10th house represents various things such as our career, career success and our public career image. Scorpio energy represents rebirth, transformation and power. Furthermore, Jupiter was in the sign of Scorpio during this time of her life. This transit was reflective of her receiving a lucky career opportunity that transformed her life for the better and gave her an abundance of self-empowerment. Oprah's life trajectory would change forever from this moment on.

Oprah is massively successful and world-renowned, and her birth chart is reflective of this. For example, Oprah has Mercury in her second house in Aquarius. Mercury is the planet that represents our mind, our thoughts, our intellect, our intelligence and our abilities. The second house represents various things such as our speaking abilities, our voice, our finances, our savings and our personal possessions. Aquarius energy represents being accepting, unconventional, unique, and non-conforming. It also represents problem-solving, evidence, large groups, society and community.

Mercury in the second house in the sign of Aquarius can be indicative of being able to make money from using your voice, and getting into the realm of public speaking. It also represents being able to make money from thinking outside of the box, being unconventional and unleashing your inner creativity and uniqueness. Oprah was able to make money by using her voice and literally getting into public speaking. Furthermore, she was able to find success from being unconventional, analytical and unafraid to ask challenging questions. She is able to empathize, listen and accept others for who they are.

Related | Oprah and Prince Harry Are Making a TV Show

Oprah also has her Midheaven in the sign of Libra, and its ruler, Venus, sitting in the second house. The Midheaven represents our public career image and success. Having her Midheaven ruling planet in the second house can also be indicative of her making a lot of money from using her voice. This is because Venus is a planet that represents money and luxuries. However: Venus is also in a challenging square aspect with Saturn in her second house. Saturn is the planet that represents setbacks, delays and challenges. Saturn's malefic and hindering energies start to really ease up in our early to mid 30s. This aspect can be reflective of Oprah growing up not having enough money, but working hard and achieving massive amounts of financial success later on in life.

Oprah also has her Ascendant at the 29th degree. The Ascendant represents how people perceive you and how you view the world. The 29th degree, ruled by Leo, is a fame degree. This particular degree represents long lasting and perpetual fame. This can be reflective of Oprah's long-lasting success, recognition and fame throughout the years.

Oprah has had a tumultuous life consisting of an abundance of challenges and accolades. She is the epitome of tenacity, wisdom and strength. She has overcome so many adversities that have propelled her to be on a journey of success, and triumph. We are grateful for her talents, skills and legacy that she's had in society. Thank you, Oprah.