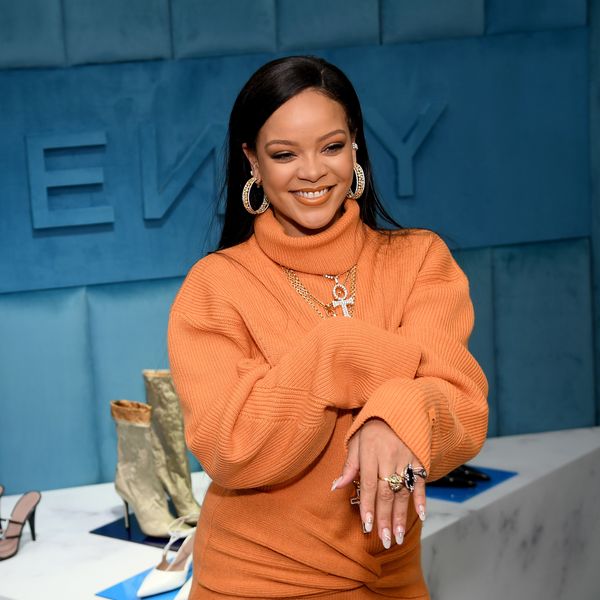 Amidst all the shows, presentations and appointments during NYFW, the fashion flock still managed to squeeze in some time to hit the coolest parties this season. From Billy Porter kicking things off with hosting duties at L'Avenue at Saks Fifth Avenue to Rihanna's highly anticipated appearance at Bergdorf Goodman for her Fenty launch, here were some of the best events that were worth checking out. See below for a complete roundup of the week's party highlights.

Dior's new men's boutique in Soho brought out a slew of influencers and friends of the brand like Tanner Reese, Parker Kit Hill and Adam Bartoshesky to celebrate the opening. Guests sipped on cocktails and said goodbye to fashion week as they checked out the new collection by creative director Kim Jones.

Miu Miu blocked out an entire evening during NYFW to celebrate the latest chapter of its ongoing "Women's Tales" series, which invites female directors from all over the world to create special projects that explore themes of vanity and femininity. The brand tapped Polish director Malgorzata Szumowska to create a dazzling short film called Nightwalk that premiered at the Village East Cinema for hundreds of guests before transporting everyone to Ludlow House a few blocks away for a dinner and afterparty.

Fashion icon Olivia Palermo has lent her design chops to numerous brands like Banana Republic and Karl Lagerfeld through collaborations, but on the last day of fashion week she finally celebrated the launch of her very own collection. Friends of hers like Alex Assouline, Brian Atwood, Eva Chen, Nicky Hilton Rothschild and Wes Gordon all came out to support Palermo at Chefs Club, including her dashing husband Johannes Huebl, of course.

After The Blonds presented one of the most entertaining runway shows of the week, the brand hosted an equally energetic afterparty at fashion week hotspot The Fleur Room with Motorola and Bombay Sapphire. Designers David and Phillipe Blond held court as guests like Susanne Bartsch, Nikita Dragun, Lion Babe and Ellen von Unwerth came out to celebrate with the duo on their FW20 collection.

About half past 10PM, Rihanna made her highly anticipated entrance inside Bergdorf Goodman to celebrate her new Fenty pop-up alongside the retailer's fashion director, Linda Fargo. Guests clamored for a shot of RiRi as she made her way around the store to greet some fans and check out the new space.

New York menswear label Ovadia celebrated its new collab with UGG at the Jane Hotel on the night before the official start of fashion week. Ovadia founders Shimon and Ariel held court as guests mingled and danced in the intimate space. The capsule consists of reimagined versions of UGG's Classic Mini boot and Tasman slippers rendered in new prints and subtle tweaks.

Fendi transformed its Madison Avenue boutique into a playful, sun-drenched paradise to celebrate its men's and women's Spring/Summer 2020 collections, dubbed Solar Dream. The brand's CEO Serge Brunschwig and creative director Silvia Venturini Fendi held court as fans of the house like Zendaya, Jacob Elordi, Katie Holmes and Katherine Langford made their way around the store and checked out the digital installations.

L'Avenue, the popular new hotspot and restaurant/bar at Saks Fifth Avenue, celebrated its one-year anniversary last week and pulled out all the stops to mark the occasion, including an ear piercing station by Maria Tash. Billy Porter presided as host while other famous names like Gwendoline Christie, Winnie Harlow and Tyler Cameron showed up to join the festivities.

Conscious clothing brand Krost and its founder Samuel Krost helped launch Basic Space Experiences in New York with a coat drive and celebration of sustainability with family and friends. "We wanted to 'Rethink the Cycle,' so we partnered with One Warm Coat & Basic Space to put on an all-day coat drive, whereby people can drop off coats to be donated and in exchange, receive a tote-bag with the perfect assortment of Valentine's Day gifts." said Krost.