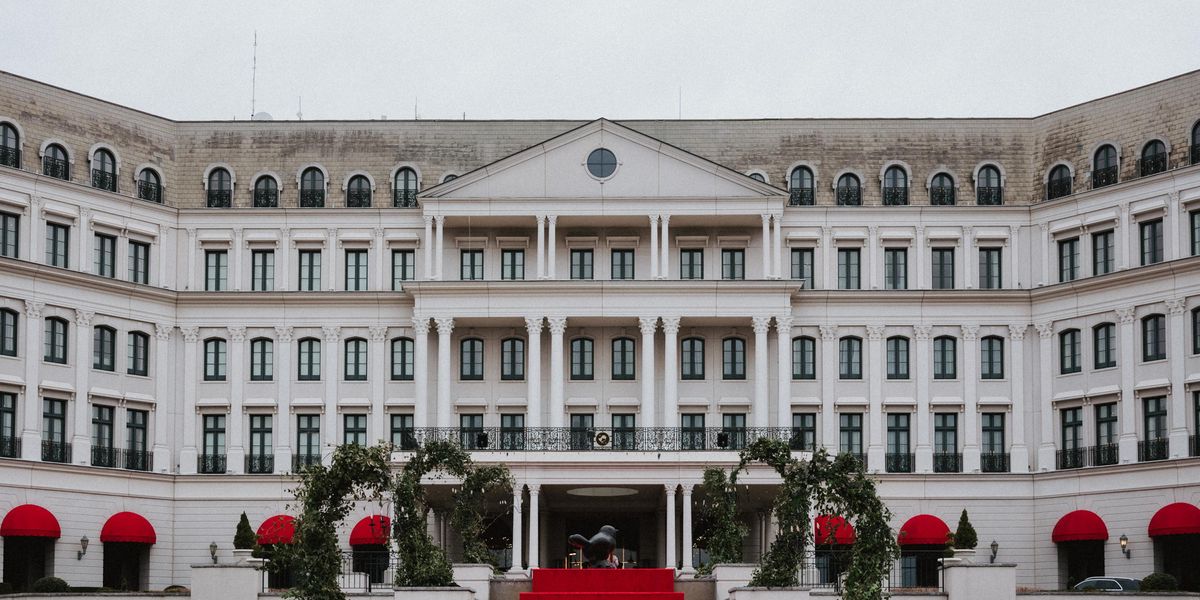 The Bachelor franchise has filmed in some pretty impressive locations over the years, from its usual spot inside an opulent mansion in Malibu to exotic resorts in places like Thailand at St. Croix. But when the pandemic threatened to upend filming of the entire series, the show had to get creative.

After last season's delayed Bachelorette outing at La Quinta Resort in Palm Springs (which sparked some serious meme action on Twitter), producers chose the Nemacolin as the setting for Matt James' season of the Bachelor. Comprising of over 2,000 acres in Farmington, Pennsylvania, the luxury resort provided the backdrop for an entire season's worth of drama, storylines and even hometown dates.

The compound consists of three separate locations — the Chateau, Falling Rock and the Lodge — and hosts an array of activities including indoor axe throwing, jeep off-roading and safari tours, many of which were planned for James' dates with the contestants. Filming winded down last fall, but it's not the first time the series worked with Nemacolin — a previous episode during JoJo's season was shot in the woodsy wonderland.

The lavish French chateau first seen when the women pulled up in their limos to meet Matt is the star attraction, and a red carpet that was rolled out just for the occasion is still on the grounds to this day. It was also the setting for a recent Bachelor finale viewing party, which hosted contestants from past seasons and even former bachelors (star pilot Peter Weber was spotted that evening).

True to theme, roses were placed all over the main lobby, and rose-colored velvet masks were handed out to guests. Multiple giant TV screens were placed in a separate viewing room in front of socially distant VIP pods where attendees could all see how James' love story unfolded after a controversial season that played out on social media in the weeks leading up to the finale.

Among those who held court at the gathering was P.J. Magerko, son of resort owner Maggie Hardy Knox who was also in tow. Magerko, who is currently Nemacolin's VP of Brand Strategy, sat down with PAPER to discuss the resort's rebranding efforts, navigating the pandemic, and the story behind how they teamed up with The Bachelor for a crazy season.

How did the resort first get its start?

I grew up here. This is basically my second home to a degree. So it's been interesting to see the evolution of Nemacolin from a child because the property started out as a passion project for my mom and my grandpa in the mid-'80s when they found a lodge up for auction, which was the only building on property at the time. So they bought it and turned it into the wonderland that it is today from the Chateau to the spa, but it all started with the lodge. So, it just continues to expand and grow because mom, pap, and myself are all dreamers. We feel the fantasy and make the fantasy a reality.

How did you get involved with the family business?

I moved away to school in New York and went to Tisch for film and tv production. After living in New York and LA for a while, I decided to come back and help out and bring my perspective into the mix. We're going through a lot of branding shifts at the property that we've never explored before. There's a lot of implementation of theater that we're working on. Just again, bringing Nemacolin into the 21st century. But there's not one era or ideology that Nemacolin represents. As you can see you transport yourself to time as you walk through the property because you have the Parisian chateau, you have the Frank Lloyd Wright-inspired boutique hotel Falling Rock. It's a lot to take in, that's kind of where my roles come in as the VP of Brand Strategy, if you will, to break Nemacolin down to make it palatable for those who've never experienced it before.

The Bachelor component adds another layer to this whole experience. Can you tell me what having that partnership with them was like and how it came about?

So based on our relationship during the last go around when they were here in 2016, which was Jojo's season, we just hit it off right away with them. A lot of our associates were really hands on with helping their crew really make their magic happen. So that relationship stayed strong for years. We'd actually been talking with them throughout the years, especially mom and the team, when could we maybe do this again and it wasn't until Matt's season that it felt right. Especially shooting the season amidst a pandemic, that's where Nemacolin lends itself to such an array of activities all in one place. So they were able to kind of bubble up here if you will, but also maintain this variety of activities that Matt and the girls could experience while they were here. Not just that, but again just the relationship we kept with the team was just so strong that it felt right at the time.

When the pandemic first hit it affected everyone in the hospitality industry greatly. How did you guys navigate that and recover?

Well it was the first time that Nemacolin had ever closed due to anything in its history. We closed again during that mid-March period in 2020 when everything closed and we closed until the beginning of May where we gradually reopened the property. So it started with Falling Rock opening first, test everything out and make sure we could navigate it. At the onset in mid-April, we had an infectious disease doctor. Dr. Gavin Skinner came in and helped us re-write all of our standard operating procedures with Covid in mind to make sure that we're opening the right way to ensure the safety for our associates and our guests. So it's wild but again that happened and then as soon as we opened the conversation with the Bachelor crew started and then we started going through all of our rebranding processes. So everything kind of happened at the right time.

Also when the Bachelor first landed on property we were shooting this wild advertisement for Nemacolin which was very movie-musical inspired. So there were two productions going on simultaneously amidst a pandemic and rebranding and what not. It was amazing to see how we were able to pull it off amidst a pandemic through testing, through bubbling up if you will. It's wild because we were so blessed that there were a lot of good things that came out of it for us, even though we were hit so hard. We've opened and closed so many times due to different case surges but throughout that whole time too mom has employed everyone even when we weren't physically open. So caring for our associates is definitely first and foremost.

You mentioned the rebranding process. What are some of the strategies you've been implementing and what do you hope to achieve?

So before we were just kind of overarching Nemacolin. We just described ourselves as Nemacolin to everyone. But as you've seen over the past few days, there's so many brands within brands and pockets within pockets. So we really broke it down and identified again here is the lodge at Nemacolin here is what that experience is like, the Chateau at Nemacolin, Falling Rock at Nemacolin, the spa and all of the amenities. We'd never broken it down that palatable before. Through the website, through the app that we're developing through all of the video and photo work that we've been working on just to really make it more palatable before you get on property to understand the complexity of the property.

What are some of the activities that Nemacolin is most known for?

Definitely the art tour and the art collection itself, it's just really eclectic but it's very cool in the sense that it's right there in front of you. It's not like the Mona Lisa that's 10-20 feet away from you that you can't really interact with it. All of the art is very right there for you to feel and see. Not that we encourage you to touch it. But the Tiffany lamps, all of the Boterro paintings and sculptures and what not. It's a really amazing art collection to immerse yourself with. Of course the spa, all of the outdoor activities. One of my favorite things that we don't really talk about that much are all of the ghosts here at Nemacolin. Nemacolin's very haunted. Nemacolin can be very spooky, which we love. We love spooky vibes.

Can you tell me what it's like working with your mom and what that family dynamic is like?

Well my mom is my best friend, so it works out perfectly. We both have similar yet different approaches in the way that we work. My mind is definitely the more creative, marketing mind. But she's very operations, black and white, get it done vibes. So we compliment each other very well and I've obviously grown up with her intense way of working so I'm used to that. I'm used to surrounding myself with those types of people. So I've learned a lot from her over the years, but still have stayed true to my way of approaching things in a more abstract way. So we both bring that to the table and make it work. I've only been involved in this capacity for the past two years, so it's been cool to see things start to manifest and transform in ways that I could never imagine.

What do you hope the guests take away from this experience?

We hope that guests really experience an escape. Like an escape to wonderland, away from the city, and truly immerse themselves in the property and leave feeling refreshed, recharged, and inspired.