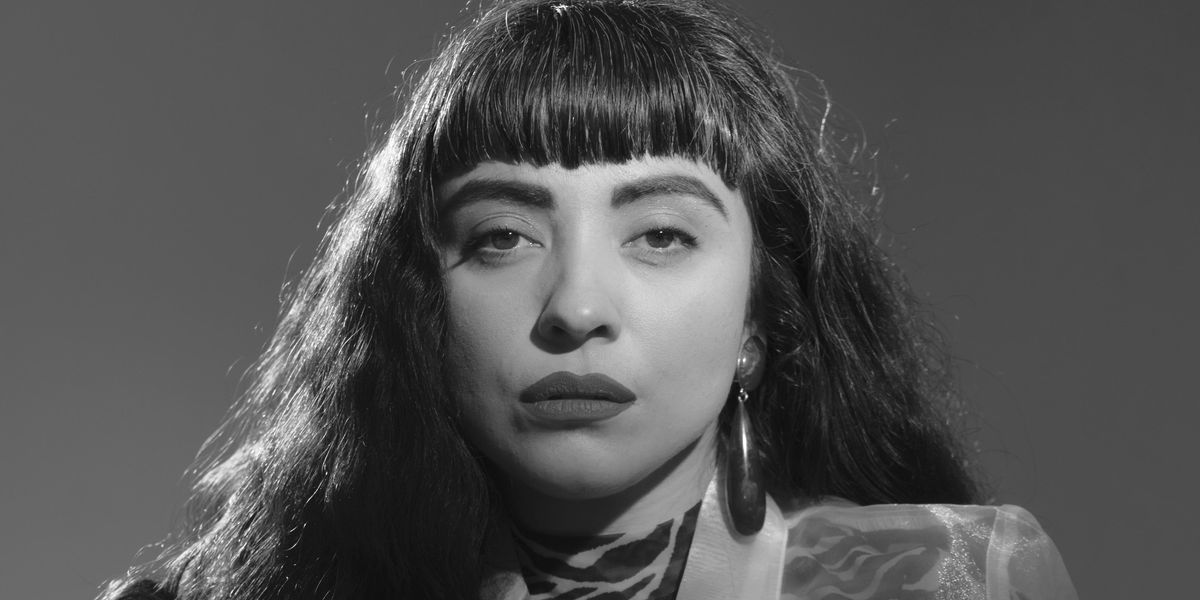 Tepoztlán is tucked into a valley. The Latin Grammy-winning Chilean artist Mon Laferte relocated to Mexico about 15 years ago, and in the last two, found this Pueblo Mágico — or area of special historic and folkloric significance according to Mexico's tourism bureau. It's a fitting home for its quiet and potential for optimum solitude. About an hour-and-a-half from Mexico City, Tepoztlán is where Laferte wrote the bulk of SEIS, her latest album and her first expressly devoted to regional Mexican music, out today.

Enveloped by its lush mountains is how Laferte spent the beginnings of the pandemic. And it's there, in her isolated space, where she discovered a connection with a former Tepoztlán resident: the late Chavela Vargas. The iconic, pioneering singer — one of the first to venture into the regional Mexican genre as a woman, and certainly the first openly lesbian — lived out the last years of what was an a life and career both rife with sadness and sparkling with success.

"I felt very connected and very identified by Chavela," Laferte says. Before putting together SEIS, she'd seen a documentary about Vargas, who was originally from Costa Rica. They are both migrants, she notes, and "adopted Mexicans, in a way," each enamored with the culture, music, traditions and beauty of the country.

They share artistic characteristics, too. Vargas intensely channeled her emotions in rendering every song, many of them rancheras. She poured out heartache like tequila from a bottle, except that can't be accurate, because she wouldn't have wasted a single drop. Vargas was, for much of her life, an active alcoholic. Her disease — as she so named it — deterred her only for brief periods,albeit sometimes with close relationships as collateral damage.

"That honesty, that need to strip down completely to my raw emotions, to show myself exactly as I am when I am singing — I felt very identified with her," Laferte says.

Laferte accomplishes that feat in live performances, of course, but it comes through on recordings, too. Have you ever had your heart wrung out like a used towel? That's what her new track "Se Me Va a Quemar el Corazón" feels like.

"It's the song on SEIS that's most 'Chavelista,'" Laferte says. Visceral, full of imagery, Laferte sings that her heart is burning, she is going to explode from the inside out, her mouth is painted with regret. But she fights all this: "Te odio más que nunca," she sings. "I hate you more than ever." For Spanish speakers, this guitar-and-vocals ballad is a bag of cement dropped on your heart. Bit by bit, Laferte scoops out weight — but the dust lingers.

In the video for the song, Laferte is the bull to a matador. She charges, she falls, she gets back up. The brocade-and-sequined matador swaps his red muleta for a plastic tarp with which he nearly suffocates her; it is horrifying. But she wrangles herself free to turn and punch him hard enough to knock him to the ground. It's all very Almodóvar-esque — in coloring, in its slight yet emotionally symbolic absurdity. (Coincidentally, or not, Vargas and the Spanish filmmaker were close friends.)

Laferte released a distinctly different-sounding cut today, along with a video, this one a collaboration with extraordinarily iconic Mexican pop singer Gloria Trevi. "La Mujer" was written years ago, and while she's performed live often, she never recorded it.

"It had some toxic lyrics," Laferte explains. "I was in a very toxic moment when I [originally] wrote it."

But her fans repeatedly pleaded for a recorded cut, and so she released a reworked, decidedly empowered version: "There was a part that said I drink everything, I've drunk everything because of a coward. The blame was put on the guy," she says. "But really, no—now it says, poor you, goodbye, sad coward. Like, now he doesn't matter to me, I don't drink for him, I drink for me."

An added bonus, of course, is the appearance of Trevi. Laferte is a huge fan, as are most Spanish-language music aficionados; Trevi transcends generations. In the '90s Trevi's following was built on her wild-child, rebellious charm — she'd run amok onstage, particularly when performing "Pelo Suelto," an anthem in honor of doing whatever the hell you want, knocking down set pieces and hassling cameramen. She'd roll around on the floor in ripped-up tights. She'd kick her feet in the air like a child having a fit. Sometimes she'd pour soda all over herself. She was banned from a Mexican network for flashing her underwear during a live TV performance. For many, she is the Mexican Madonna. (I'd rather say that she is simply Gloria Trevi, because nobody compares.)

Trevi's career was cut short by a prison sentence. Groomed at 15 years old by a well-established producer, she ultimately became part of his sex trafficking scheme, luring in girls with the promise of pop stardom. Multiple minors were abused and violated and hurt.

The charges against Trevi in 1999 ranged from kidnapping to corrupting minors and embezzlement. During her time in prison, despite its maximum-security status, Trevi became pregnant with her abuser's child. Her conviction was overturned in 2004, after spending four years behind bars.

At the 2018 Latin American Music Awards, Trevi tearfully divulged onstage that she'd been beaten, manipulated, abused and humiliated by her former partner. There is more to this story, of course — most importantly, the story of the survivors. But Laferte, like many, holds that Trevi is one of them.

"She told me the song helped her a lot," Laferte says. With its renouncing of a controlling man and it's taking back of personal agency, "La Mujer" mirrors Trevi's own life. "La Mujer" also reflects Laferte's enduring, general dedication to women's empowerment, and to human rights as a whole. But she says she's not an activist.

"If I'm an activist, I'm the worst one," she laughs. "Because activists dedicate their lives, right? All the time. And I'm here doing other things — but I have concerns."

One of those is Chile's democracy, or the concept of democracy in general. Historic protests in Chile in the fall of 2019 over the hike of public transport fares ultimately turned deadly for many as a result of a volatile combination of general chaos and violent police response. What began with students taking over subway stations in the capital of Santiago became a country-wide protest against economic inequality and government corruption and privatization of services. More than 1.2 million people protested in Santiago on October 25 alone. Demonstrations continue to this day.

The most recent count of people who've died in these protests is from 2019, after the one-year anniversary of the protests saw renewed demonstrations. At least 29 people have died. Human rights orgs have noted many reports of serious violations, like torture and sexual violence, of protestors by security forces. Many protestors lost eyes via rubber bullets shot by police.

Laferte joined the people in protest in Chile, and also spoke out for her country at the 2019 Latin Grammys red carpet. Dropping her black top to her shoulders, her chest bore a scrawled denouncement against police brutality: "In Chile, they torture, rape, and kill." Around her neck Laferte wore a green bandana; the international symbol for abortion rights.

The fallacies of democracy is the subject of "La Democracia," a cumbia number on SEIS. On another track, "Esta Morra No Se Vende," neoliberalism is named directly and capitalism is conceptually criticized.

Unsurprisingly, Laferte was criticized for her Latin Grammys protest. Misogyny is gonna misogyny. It was not her first time being publicly sexualized with consent, however.

In 2018, she kissed her drummer onstage. She told a massive crowd, "I'm in love with a woman! And it's my drummer!" Immediately the media declared her a lesbian. In reality, though, Laferte was never with her bandmate. "It was a friendly kiss, because we love each other. But we were never together," she confirms.

Laferte told PAPER the press has never asked her about her sexuality. She neither confirmed nor denied any leanings toward any gender.

"My orientation has to do with love, with desire, and other things. I could end up liking — I have no idea," she says, adding that labels just aren't her thing.

Chavela Vargas proudly announced her homosexuality — but not until late in her career. Still, it was always, even in the '40s, an unspoken secret; everyone knew, but nobody talked about it. Vargas was with Frida Kahlo for a time, and it's rumored she also slept with the wives of many prominent politicians and celebrities. Vargas herself claims to have woken up next to Ava Gardner after the debauchery that followed one of Elizabeth Taylor's weddings.

Activist she may not be — by her own standards, anyway — but there are several more songs on SEIS that feel like a critique of patriarchy "Te Vi" is about mothers as people first, and "Se Va La Vida" was written as tribute to the injustices faced by incarcerated women. Laferte worked some years ago leading workshops in a women's prison in Chile.

A women's banda — historically, only men could play in Mexican bandas, and it remains male-dominated — called Mujeres Del Viento Florido, composed of girls ages 14 and up, orchestrates the finale of the latter. (To further encourage to girls and women who want to play banda music but feel excluded, Laferte closes the album with a banda version of "Se Me Va a Quemar el Corazón.")

Laferte never says she was inspired by this aspect in particular of the legend's life. Today she shares the same stunning Tepoztlán vista that Vargas, who died in 2012, fondly looked out onto in her later years. That's a most direct connection. But there's a kinship — wow, if only they'd ever met — found in how they both live their truth, whatever that may be, however it may manifest, and lay it all out in song to share with the world.