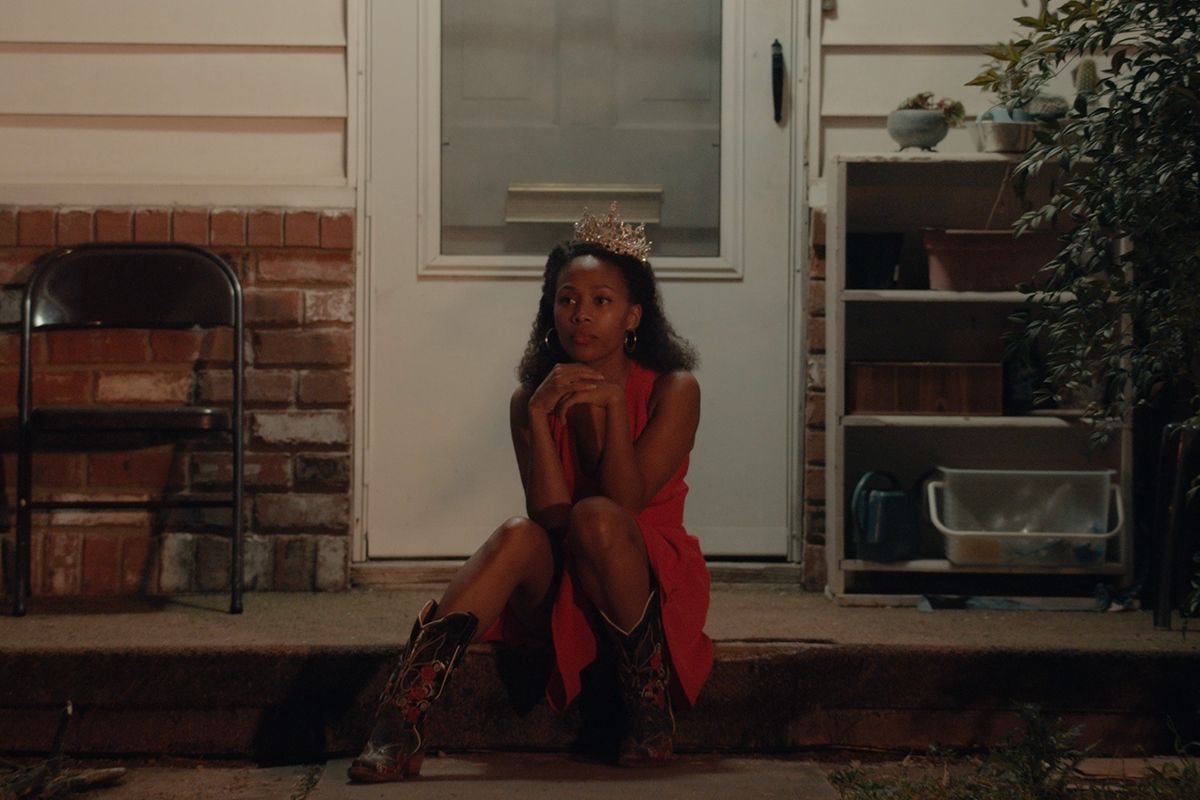 The movie is filmed in her hometown of Fort Worth, and Godfrey Peoples' love and admiration for the holiday is apparent through her careful weaving of historical and cultural narratives about Juneteenth's significance within the Black community. Juneteenth is a multi-generational event where our timelines intersect with those of our ancestors to celebrate freedom from chattel slavery. Miss Juneteenth is also a mother-daughter story, with Baharie's Jones pushing her daughter Kai (Alexis Chikaeze) to follow in her footsteps and compete for a tiara that Kai doesn't necessarily want.

Juneteenth's Texas origins are crucial to the story of Miss Juneteeenth and its award-winning director. Godfrey Peoples got on the phone with PAPER to discuss Juneteenth's recent transition into the national consciousness and how it feels to see that happen during the release of her very Southern movie.

Historically, Juneteenth is a Black Texan tradition that gained notoriety in surrounding states throughout the South, but never migrated into Black communities nationwide. This week, companies and governments have implemented policies to acknowledge the historic holiday. Based on your lived experience of growing up in Texas, how does it feel to have this beautiful Texas tradition highlighted across the country?

Juneteenth has been such a big part of my life, and what made it special for me was the Miss Juneteenth pageant. As a young Black woman, I saw young women that looked like me, who were hopeful and excited about their future. That experience stayed with me and gave me confidence as a young woman. It's a story that has stuck with me, my whole life.

As an artist and storyteller, I wanted to find a way to write about the folks I grew up with and I felt like they weren't represented on the screen, in the way I say them with beauty, dignity and excitement. We all grow up with our own individual experiences of seeing life happening and it just happened that [Miss Juneteenth] is a story that I wanted to tell.

Cultural references such as the Battle of the Bands, Spelman, and Morehouse are common throughout the lexicon of Black films. But in Miss Juneteenth, the incorporation of J-Setting, a dance style popularized at Jackson State University, and Prairie View A&M University signaled a more specific emphasis on regional HBCUs in the South like Alabama State, which are less recognized by Black communities along coastal regions.

The State Fair Classic between Grambling University and Prairie View to see the Battle of the Bands, we look forward to that annual event. It's important to put those memories that are near and dear to you on the screen, if it makes sense for your story. People already know about the Battle of The Bands, they know about PV, but we're in a position where it brings attention to these institutions. If I could have mentioned all HBCUs, I would, because they're important to our foundation. In undergraduate, I started at a HBCU but didn't finish. But I spent time as an artist at HBCUs, and they're very near and dear to my heart.

Typically, coming-of-age stories with a beauty pageant narrative are centered around the conflict of a suburban white girl's efforts to find herself while resenting her mother; a common trope of white femininity. That's compared to the beautiful relationship between Turquoise Jones and Kai Jones in Miss Juneteenth, which uplifted the matriarchal tradition of being a single Black mother in the South. For the Joneses, the Miss Juneteenth pageant represents a cycle, where Kai is able to do better in life than her mother and grandmother.

I was raised by a matriarch. There were supportive men in my life, but my mother was single for much of my life. In return, my grandmother was a strong figure, but my mother was dedicated to the education of her children, In my life, I saw women with dignity, grace and strength. They were my community. I have this film dream that doesn't look like everybody else's, because I want to make these specific films and specific worlds. I want to make films, especially about Black women.

Right now, I'm talking about the women who were passionate about my journey, who supported and pushed me forward. I wanted to tell the story about a Black woman with a dream who knows no matter what that she wants something for herself. Even though she has these hopes and dreams for her child to have a better life, so it's the constant balance of reconciling those two ideas.

Turquoise and Kai's relationship develops into their individual paths of ownership; for Kai, it's trying out for her school's dance team where she could obtain a college scholarship. For Turquoise, it's the acquisition of her boss's business after he experiences a heart attack. It's a twist on the idea of what Miss Juneteenth represents — because she's owning a business, in a time period where Black businesses are fighting to stay alive.

At one point, it was a bustling community with commerce and businesses. Today, all you have are holdovers. In the film, the bar is called Lloyd's, which is it's real name. It's a communal and multi-generational place where Black folks go as a home away from home. The funeral home, it's called Baker Funeral Home, they're family friends. It's this sense of community. Sadly, because of coronavirus's impact in a heavily gentrified community, we have to hold onto our places and spaces that we call our own.

It's beautiful to relish in a cultural moment where a Black Texan tradition is going to be celebrated nationwide this week. As white communities migrate into our neighborhoods of Stop Six, South Dallas, and Fair Park, it's nice to watch a film that draws attention to my favorite aspects and qualities about being a Black Texan, especially because I'm far away from home.

I don't love everything about the South, but I love being from here. I grew up in Black Texas, and that's what defines me. It has its own sense of pride and history. That's what I love and you can see that in my work.

Miss Juneteenth is going to be released on the first nation-wide celebration of the holiday, so how do you plan on celebrating?

Obviously, it's not going to be the same because we're used to connecting and having that sense of community while being together to commemorate this moment in history for Black folks in Texas. Remember, other slaves were brought from states into Texas as well, so we're trying to connect with as many people as possible. It's a bittersweet moment because we're navigating these tragedies that have befallen our community as Black people. I hope the film can give people a ray of hope; because that's all I can do. I can't tell people how to feel, but that's what's possible for me.

Miss Juneteenth is available on demand and digital this Friday, June 19th.