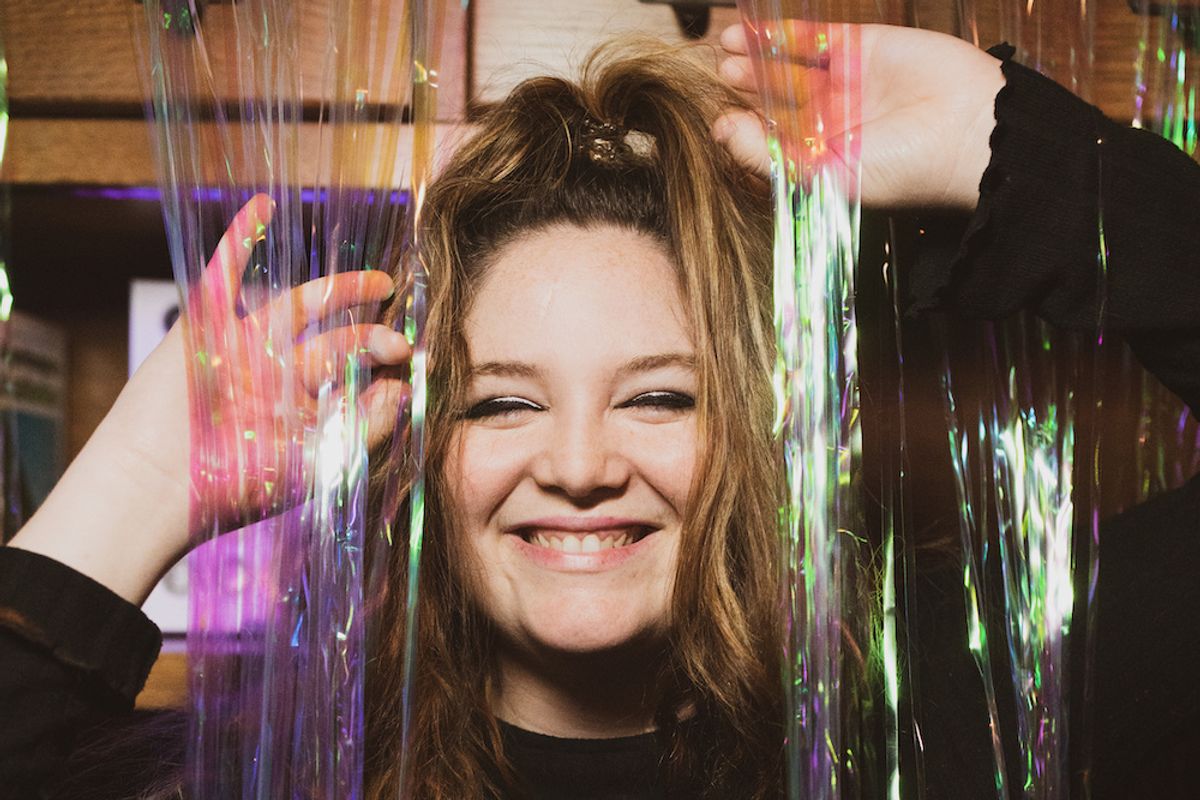 Megan Stalter: Faking It 'Til She Makes It

When Megan Stalter received a Facebook invitation to her high school reunion two years ago, she was less than excited to attend. "I posted in the group and said, 'Oh, I'm not coming. All of you guys were mean to me. And I'm a lawyer now,'" she recalls. "I was kidding. But then some of the mean girls started commenting, and it became a whole thing." One of Stalter's former bullies did some detective work, and the situation took a Romy and Michelle-style turn. "She messaged me pictures of myself that she found on Facebook where I was at the Rainforest Cafe, and she was like, 'Figured it out! You're at the Rainforest Cafe? I don't think you're a lawyer, babe.' As if lawyers can't go to Rainforest Cafe!'"

While she might not technically be an attorney, the 29-year-old is a beloved comedian whose front-facing camera videos routinely go viral — the one she filmed as her supposedly bar-certified alter ego is hilarious. It's an unfortunate truth that Twitter clout doesn't impress the basics from your hometown, but since moving to New York last summer from Chicago, Stalter has parlayed social media fame into a thriving stand up career while producing her web series The Megan Stalter Show. Under lockdown she's pivoted to near-nightly Instagram Lives that serve as high-energy fireside chats for her 33K anxious followers.

Whether they're an unlucky-in-love former real estate agent turned Disney Parks employee ("I walked in on this guy that I was seeing, he was in the Beauty and the Beast presentation and, uh, yuh — he was having sex with the Cheshire Cat"), or a wannabe actress auditioning for the part of a 15-year-old girl who "gets sick from the sun," Stalter's characters are faking it until they make it, loud and theatrical with big hair and winged eyeliner and affected accents. Their confidence is unearned; they exist on a spectrum of somewhat to completely deluded. "The thing that I think is so funny in comedy is always like a character that feels really real, or a character that's absolutely insane, but someone could look at them and be like, 'Oh my God, I know that person,'" she says. "Everyone knows that girl at church who is mean to everyone, or that kooky woman who's like, 'Yeah, my husband hasn't come home, I'm making dinner and all my kids hate me, but I'm still smiling!'"

Related | Frankie Cosmos and Cat Cohen: 'All Comedians Just Want to Be Rockstars'

There's something consoling about these women, and Stalter is a balm for all of us who are feeling the true extent of our own inadequacies lately. One fan recently tweeted about how two different friends purchased Meg Stalter Cameos to cheer her up when she lost her job — the comedian says she's been in especially high demand on the service during lockdown. Stalter's Instagram and Twitter followings have also rapidly increased post-coronavirus outbreak. "What is more meaningful to me than the followers is the sweet messages I've gotten," she says. "It sounds really cheesy, but I feel really close to the followers right now in a way that is insane."

While some live performers have been thrown into career uncertainty by the COVID-19 pandemic, Salter was accidentally prepared. "I definitely feel like I didn't fully realize until staying inside that I'm ready to do all this online stuff," she says. "I've been doing it already, and I can do this for a little while. It just shows how much comedians can do online." One unintended consequence? A new legion of teen fans. "I think more people are online right now because we're all home," she says. "Now I have to get used to 15-year-olds watching."

Like many in her industry, Salter has also turned to the recording studio of late. On her new podcast, Confronting Demons With Megan Stalter on the buzzy Forever Dog network, she's in character as an alternate, considerably more fame-hungry version of herself — "a mean nobody that wants to be famous." But Stalter remains likeable and well-intentioned even in this deluded diva guise, stuttering her way through the catchy opening track and mixing her aphorisms. In the show's universe, she's forced to trick her guests (fellow comics like Caleb Hearon, Benito Skinner and Mary Beth Barone) into calling in. Once they're on the line, she berates them with petty grievances.

Stalter's brother Nick acts as the podcast's co-host, playing a much-maligned version of himself who attends to his sister's various whims but never wins her approval. ("I would rather be a nurse's assistant down in hell than work with you," she tells him in a recent episode.) The real version of Stalter speaks fondly of Nick as the naturally funnier sibling, whose life is ripe for anecdote. "He told this story on the podcast about him eating garlic," she recalls. "He basically drove past this high school and he saw outside they were doing a garlic eating contest later in the day, and he spent all day preparing for this competition at a high school he knows no one at, he doesn't know any kids there. The competition was two other adult males and he lost. After spending his whole day. He just pulled over. Like, you're at a high school you've never been to before!"

That inherent need to impress those who will never be impressed comes across as highly relatable in the age of self curation. The exercise is futile, as the reunion incident demonstrated ("It doesn't feel good when you realize your bullies don't get that you're kidding," Stalter sighs dramatically), but it's fun to watch. Comedy is about putting yourself out there, over and over again, with no real proof that it's working, until someone picks up the pilot and you can move to Los Angeles. Stalter embodies that mix of desperation and delusion so well because like any live performer she's felt it, so there's always a sense of empathy. "I feel like all my characters are people whose lives didn't turn out a certain way, but they're still trying to pretend like it did," she says. "People that are coming off bad, but they actually have big hearts."

You're only a loser if you feel like a loser, and Stalter's alter egos rarely contemplate that possibility. "They are truly failures," she says. "Failures who are like, "Oh my God, you'll never guess what I just did. I'm a genius."