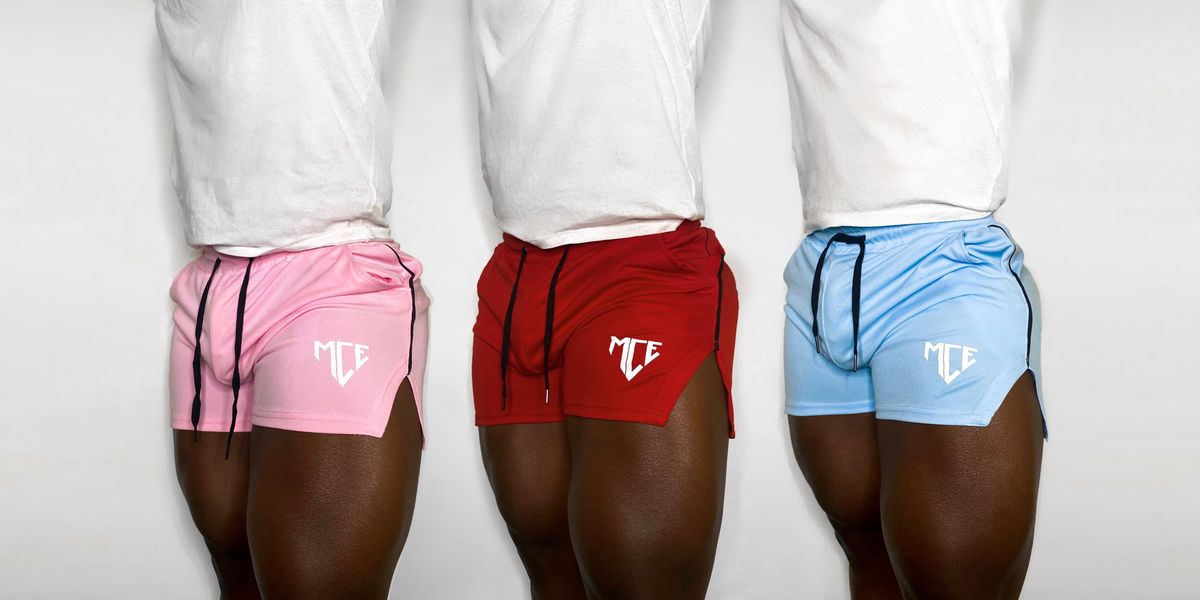 If you've spent any time on Gay Twitter this past year, chances are you've scrolled past a selfie or thirst trap of someone wearing MCE Creations. Whether it's the baby pink gym shorts, Nicki Minaj-inspired swimsuits, or one of the brightly-colored jockstraps, the brand has become something of an online sensation with the gays. And it's all through the hard work of creator and owner Michael Erobu.

MCE is named after the initials of its 27-year-old founder Michael Chike Erobu, whose main goal is to make customers feel "cute and confident" in his creations. The aforementioned shorts, which helped put him on the map, came about after he found himself unable to find a pair he really loved (they were always either too short or too long). So last fall he designed the MCE shorts to be in line with what he's always envisioned.

"I love bright colors, I love pastel colors, obviously the baby pink and light blue are my signatures," he tells PAPER. "A lot of my references are pop culture and the internet, like Twitter. Obviously Ariana Grande, I have so much Ariana pride. I'm a huge Barb, always will be. I just really like plain and cute clothing to be honest. I think that's why a lot of Twitter resonates with it."

Indeed, the buzz surrounding MCE Creations seems especially evident on social media, which is amplified even more by the thirst politics of Twitter — the likes quickly come pouring in the second someone posts their MCE shorts or jock strap 'fit pic. As the age-old saying goes, sex sells, and Erobu is well aware of this.

"Obviously I like cheeky and flirty, I make thongs and stuff so there's going to be ass out," he says with a chuckle. "Our bodies and sex positivity is such a large part of queer culture, especially queer online culture. Just finding a way to marry all that together is the best way I like to describe my marketing. I like to do the modeling myself. For the shorts I know if my bulge is there it's going to get more attention. I'll obviously use that to my advantage. I like to toe the line of flirty but not too vulgar."

Unlike other underwear lines that target a specific segment of gay men, Erobu has made sure that his brand messaging is inclusive of all body types as possible. A scroll through the Twitter feed and you'll come across posts and retweets of people of all shapes and sizes, ages, body hair, and more. Yes, there are posts of guys with chiseled abs and physiques, but you'll also see ones with soft tummies and fuzzy chests.

"I want everyone to feel confident and sexy no matter what body type you are, everybody deserves that," he says. "When you go to my Twitter or Instagram page, I want you to be able to see someone that looks something like you. So many gay underwear brands, it's nothing but predominantly white, 10% body fat muscle gays, that's all you're going to see. I want everybody to feel good about themselves when they're shopping on my website."

I think these are the comfiest shorts I’ve ever put on, everybody say thank you @mcecreations https://t.co/WsbtlHQos8
— zachary (@zachary)1626218458.0

Erobu originally started designing clothes back in high school when he was tasked by the student government association to design the homecoming shirts after their leader noticed some of his sketches. At first, Erobu was designing shirts and hoodies, focusing on sharing and selling his work via Instagram and Tumblr. He kept the business going as a side hustle throughout school and following graduation, but it wasn't growing at the rate he wanted. When the COVID-19 pandemic had many people spending a lot of time at home, he did a small batch of shorts in September 2020 — they sold out almost instantly.

After the first round of stimulus checks were distributed, Erobu put the money toward a first round of jockstraps, which also did extremely well. As soon as he started doing underwear, he went from 20 sales a week to 60 a day. At the time, he was working in the purchasing department of a company that built ships where he bought parts like heating ventilation. When MCE finally took off, Erobu decided to quit his job in April and make the clothing line his full-time job.

"It got to a point where I couldn't do both, I just couldn't keep up with the orders," he says. "I had been working from home so I had been doing both anyway, but I was literally staying up until 3, 4 A.M. in the morning to pack orders and waking up at 8 for work. I was spreading myself way too thin."

Erobu does all the designs and picks out the fabrics himself at his home in Mobile, Alabama, and then has a manufacturer on the west coast. They'll send him samples, he'll make notes and do final approvals. Then he processes, fulfills, and ships all the orders himself. He jokes about how he doesn't think most of his customers realize it's him up at 2:30 in the morning packing up their garments.

Even considering how good business has been, Erobu couldn't anticipate the interest that came for his Pride line of underwear and shorts. He had been averaging about 60 orders a day and on June 1 when he unveiled the new designs, received about 380 orders. While it's a one-man operation as of now, Erobu is on the verge of needing an assistant and is hoping to grow enough that by the end of the year he can hire a fulfillment company.

Beyond potential hiring, Erobu has a slew of other goals in the coming months. He's working on restocking the Superb ass swim briefs that quickly sold out in two sizes. There are expansion plans to offer more larger sizes to continue being as inclusive of different body types as possible. Some companies outside of Los Angeles and one in Seattle have reached out about potentially carrying some MCE swimwear, and down the line Erobu would love to have his own storefront, perhaps in Atlanta where he plans to move once his lease is up.

"It's definitely crazy just because there aren't many queer businesses here, especially queer Black businesses in Mobile, Alabama," he says. "Black people are so creative, so I'm glad to see people like myself or Telfar be able to put this work out and it be so widely accepted and thrive. Without social media I don't think it would've been possible for me."