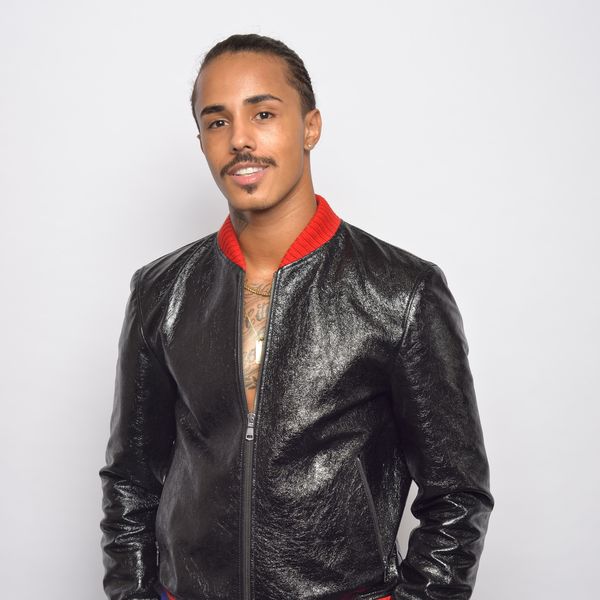 Sometimes we just want to dance in a room with sexy humans covered in glitter. Partying, one of the few pleasures left these days, is a pastime that transcends continents. No matter where you are or where you come from, we all need to give the middle finger to our real lives and shake our assets out on the dance floor. MC Livinho, a Brazilian musician, is keenly aware of this innate human desire, and wants to help us party our best selves up.

"Brazil [is influenced] every kind of music," he tells PAPER. "Rock, Sertanejo, Samba, Pagode, everything [is an influence] here... we even have Christian music."

You won't find any Christian mores in his newest video for the dance jam "Rebeca." Topless video ladies are bedazzled with crystals, while MC Livinho croons sensually in Portuguese. For those of us who can't speak the language, his smooth delivery tells us everything we need to know: he wants to make us dizzy with love. Livinho told Billboard that "Rebeca" is about "a fictional woman that, in the beginning, I'm interested in only sexually, but I know there are feelings that could lead to more. The trick of the song is opening the possibility that something deeper could happen with us." The energized rush of that first dance is universal, and Livinho has captured it deftly, though he insists that the subtext is innocent. "I'm not insinuating anything or insulting any women. I only speak about the feelings, about an event," he told us.

He's also a collaborator. Livinho hooked up with Gerex, a fellow Brazilian producer, who wears very fly t-shirts throughout the video. He also recruited Maejor, who recently toured with Justin Bieber, and who provides some English verses alongside the expertly produced blend of Brazilian funk and American trap. "What changes is the swing, obviously, the swing here is different, says Livinho, of the two musical styles. "But the music is the same." Music and fellow artists are just two of the ways Livinho explores different worlds to craft his seductive music.

Still, the 22 year-old is riding the crest of meteoric success. But the young artist isn't letting fast fame get to his head, which could stop his career in its tracks before it transcends the world (The "Rebeca" video has more than 5 million views). Livinho stays grounded by "keeping his family close," and he expressed gratitude for their support. "I thank them for all the advice, for the life lessons, for the affection they have for me," he says. "I'll always be close to my family!"

You can watch the video, below, or listen to it here on Soundcloud.