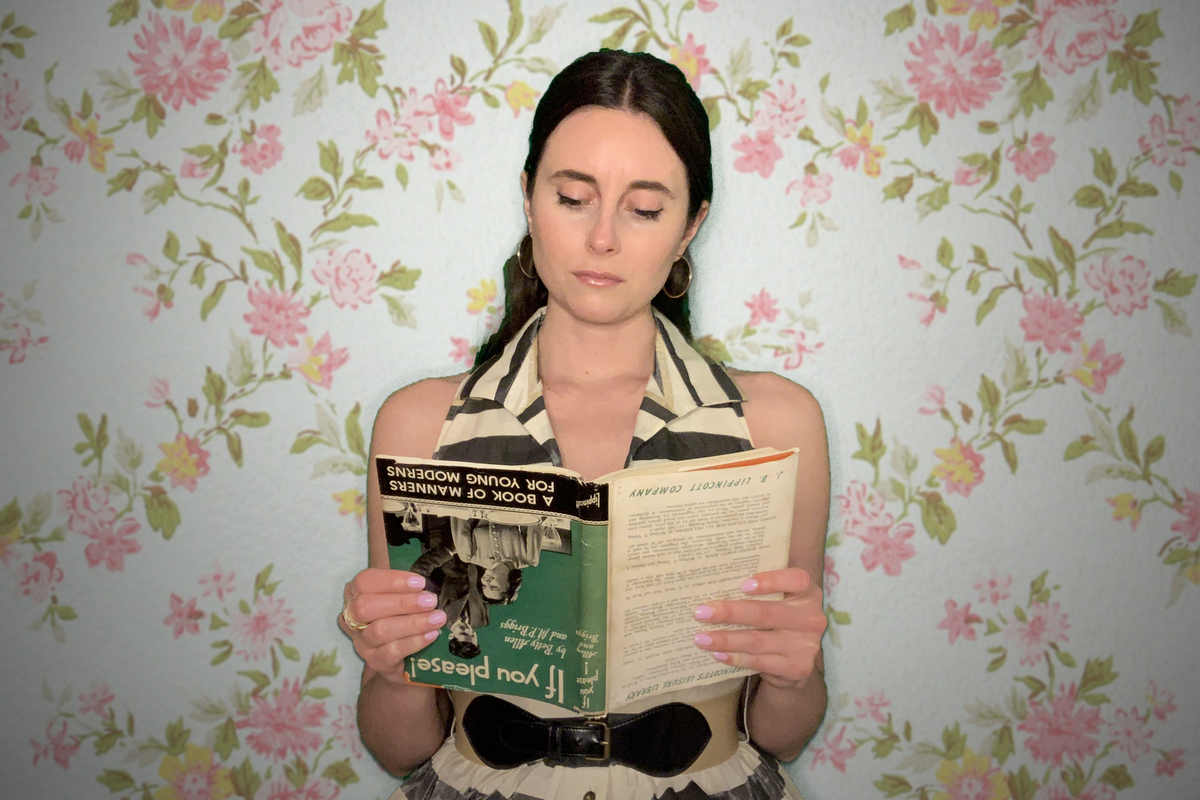 A Lesson on Manners From Someone Without Any

Generally speaking, I objectively do not have very good manners. If I'm talking to someone at a social gathering and a third person joins the conversation, I never think to introduce the two. I burp loudly in public (really, really loudly). I leave parties without saying goodbye. Though in fairness, I just hate goodbyes! I also hate hellos. I kind of just like to dive right into the meat of the convo. I will look at my phone if a conversation becomes boring, and I would never be offended if someone did that to me. It feels like expectations in social situations have not kept up with the times. Conversely, when it comes to dating, which involves people's feelings, I'm more old fashioned — I try to be thoughtful, empathetic and polite.

I was recently looking through some boxes of old books in my parents' basement and I came across one called If You Please! A Book of Manners for Young Moderns. Oh! Me! I'm a young modern! I skimmed the table of contents and my eyes lit up when I saw two whole chapters on dating and courtship. Date of publication: 1942. Well now! Life has changed quite a bit since then, so let's see if any of it holds up.

Chapter 5, titled How 'Bout A Date?, opens with some language about it being "a man's world when it comes to the initiative in making dates." Unfortunately, I know many people who still subscribe to this notion. If you like someone, ask them out. It takes courage. The worst thing that can happen? They say no and it's onto the next.

"There's a certain technique to making dates. Plan your approach so as to get the best results. It's hardly fair to put it up to her with an inquisitive 'Whatcha doin' tonight?' Give her a chance by letting her know what is on your mind." (Page 53)

Okay, I've always said this. Asking someone, "What are you up to this week?" is so passive, noncommittal and lazy. Propose a day and time. Yes, it's scary because the person could flat out reject your proposal and keeping it vague protects against that. Being specific shows initiative and thought. Other phrases you can throw in the garbage when making romantic plans: "How's your week looking?" "We should grab drinks sometime." "Let me know if you wanna hang!"

"If a girl turns you down seven times in a row with such excuses as 'I promised to go to the movies with my grandmother,' or 'I have to study for an English test,' or 'I don't have a single night free until next spring,' it might finally occur to you that the young lady doesn't yearn for your company." (Page 55)

"When you are walking with a girl, your place is always near the curb." (Page 56)

"Breaking dates is something that just isn't done. This is a point that involves honor as well as courtesy." (Page 58)

This is something we've all gotten incredibly lax with. When I was in my Hinge phase, I would make plans with a person and pray to god they would cancel. And in some cases, they did! It would make my day to have a date planned and then not have to go. A good rule I use now is, if I'm hoping he or she cancels plans, best not to make them in the first place.

"Never expect a girl to go Dutch with you. Let her show her appreciation of your courtesies by inviting you in for sandwiches and hot chocolate after the show." (Page 60)

When I first read this, I thought "going Dutch" meant having sex. Moments later, Google would reveal that it means splitting the bill. Splitting the bill at the end of a date is something the designers of this simulation we call life didn't consider and have yet to get right. I truly don't know the best rule here! It's nice to offer to split or if there's multiple dates, alternate. Some of my friends offer to split if it's with a guy and they don't intend on seeing them again. As progressive as I am in some ways, I think it's nice when the boy pays. With two girls, best of luck to you.

"Don't openly admire blondes when you're with a brunette." (Page 61)

Unless you're looking for a third.

"Don't rely too much on your looks or athletic prowess to get you by. Manners will take you where profiles won't. Correct behavior isn't sissy. You can be a star quarterback and still mind your manners." (Page 62)

Boys, is it gay to be courteous and respectful?

That's just a taste! There are plenty of rules in here that do not hold up. For example, this advice for the straight ladies: "If you're the brainy type, don't make him feel inferior. You'll have to be careful not to appear more intellectual or intelligent than he is." (Page 67) I have to laugh.

My own additions to If You Please! A Book of Manners for Young Moderns:

The book cost $2.00 and you're getting this shit for free!

LET ME HELP YOU

I put out an open call on my Instagram for questions related to love, lust and dating during COVID-19. Each week throughout May's It's Nice to Laugh on PAPER, I will pick a few to answer to the best of my ability! My blanket advice to everyone is to find a therapist. That's a great place to start!

"I'm finding that I have a hard time waiting for texts back from people on dating apps without messaging them back 50 times. How can I achieve peace and not tweak out? Or am I right to be tweaking out?" – Twake

Messaging someone back 50 times is a manifestation of this anxiety and I would not advise doing that! It won't make them respond faster and it won't ease your tension. I am pretty strict with a "no double texting" rule, so maybe give that a try!

In general, text-anxiety comes down to managing expectations. On dating apps, which are low commitment and low stakes, try to imagine every message you send out will be the last. Then when you get a reply, it's so exciting! Texting in iMessage or WhatsApp, especially if you've been out with the person, you should expect a better response rate. Be open about how you feel: "It stresses me out when I don't hear back from people because of past experiences" etc, etc.

When you message people, take a deep breath. If they don't respond, they weren't the right person for you.

"I just realized I've always loved my friend I've known for 10 years, but *dramatic sigh* I don't think he sees me like that." – Mary Magdalene

I received a few questions like this, so I'm gonna answer this one! Having feelings for friends is always messy and uncomfortable. I'm sure in the history of mankind, there have been friends who fell in love with each other at the exact same time, expressed their feelings, got married and are now buried next to each other at the graveyard. I, personally, know no such people.

I'm always going to encourage you to tell them how you feel. Life is long. If it doesn't work out, you will make new friends. Do NOT under any circumstances wait for an opportunity to get drunk and make out with them. Over the age of 22, this is not mature and it's not polite!

"Just before Christmas, I kissed this guy. I first met him in October at a party and I knew I liked him, but I was drunk so I couldn't really tell. I met him at the pub not long after and I was sober so I was sure that I liked him. Then I was invited to a party in December that I knew he was going to because my friend told me, so I got really drunk when I was there and we had a really slobbery make out sesh. All I remember is that the lights were quite dim, I was really sweaty and I think I asked him how big his feet were. (I'm scared that he thinks I'm into feet because even though I'm not.) Also, according to my friends, I chased him down the road to say goodbye when he left the party! I haven't spoken to him since, because every time I've seen him it's been other people who've planned it. I really want to talk to him or something, but I also don't want to seem crazy texting him months after this all happened. What do I do?" (Side note: he's really rich and has some well-known family members and I know this because I stalked him online, but now I'm scared that he'll think it's weird that I know all of this.) – SweatyLondonGay

SweatyLondonGay, this is so cute! It sounds like the plot of a romantic comedy where you see each other at the same party this December, lock eyes, kiss under mistletoe and ride away into the sunset. That probably won't happen, so my advice would be this: get his number, send him a text and tell him you are interested.

Here's a draft for you:

Hey [his name here]! It's [your name here]. I got your number from [their name here]. I'm not sure what your quarantine situation is, but I was wondering if you'd like to catch up sometime on a video call perhaps? At the risk of sounding like a complete [British word for psycho], I've thought about our make out quite a bit since it happened and I wrote into an advice column about it. She said I should shoot my shot, so here I am doing that.

Then, throw your phone in a river! But seriously, who wouldn't want to receive a text like that? Even if he lets you down easy, there's so much good that can come from putting yourself out there.

Regarding his rich family, everyone stalks. It might not be polite, but it's commonplace. Definitely no need to reveal that to him!

"I just found out that the guy I'm talking to is uncircumcised and I'm low-key terrified by it. I don't even know what to do with it and I'm scared it might be unhygienic. But I'm trying not to judge and I know you talked about this in your stand-up, so I thought I would ask you for advice. We're just texting and stuff now because of the quarantine, but idk what I would do with it in person." – Sydney

Sydney! Congrats on finding yourself an uncut guy. I love this for you and I'm here to tell you, there is nothing to be afraid of. If this guy is clean and takes showers (which is important regardless of being circumcised or not), you will be absolutely fine and will notice little difference (if any) when having sex. Guys are obsessed with their dicks, so in my experience those are often the cleanest parts of their bodies.

Depending on how much foreskin there is, his dick might look like it's sleeping in a little protective cocoon when it's soft. It's cute. When it's hard, there will be a little more skin than you're used to seeing around the head. Don't freak out! It's okay to tell him you've never "worked with" an uncut dick before. It probably won't be the first time he's heard that and it establishes open communication which is good and sexy. The important thing is to not make him feel self-conscious about it. Think about all the varieties of labia! They look so wildly different and guys seem to be able to adapt pretty well.

When encountering any new dick, always remember to be gentle, ask what feels good and have fun! Let me know how it goes.