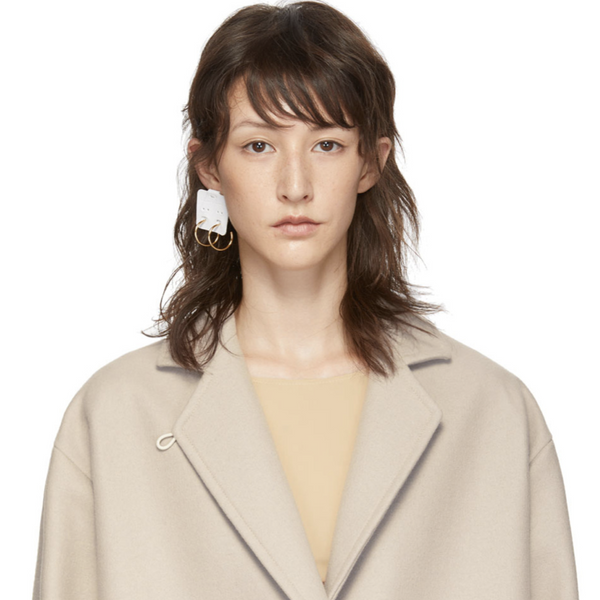 After all, aside from Vetements, if there's one other high fashion brand that knows a thing or two about a viral moment, it's Margiela. So it shouldn't come as a surprise that the folks over at the French fashion house came up with an ostentatious accessory that looks like a pack of earrings.

Retailing $305 — though the price has since dropped to $92 via Ssense — the single earring features two, detachable brass hoops attached to a piece of "cardboard" made from white calfskin and embossed with the MM6 signature.

However, as noted by The Daily Mail, the accessory recently sparked some serious online debate after user @doragzplora tweeted out a screenshot of Ssense's listing.

And though some took up issue with the concept and compared the accessory to a cattle tag, other commenters appeared more mystified by the accessory's price tag.

*swipes through photos* wait what pic.twitter.com/2s34s2QTZC

shit is called ssense but it don’t make any 😭 https://t.co/7W8rzBykIM

AND THEY WERE INITIALLY CHARGING OVER £200 FOR THIS MONSTROSITY

lmaooo I literally almost fell for it too the other day pic.twitter.com/YhJ2z8ZzFu

That said, a good number of users also just found it funny, while others acknowledged the fact that Margiela's always been a little on the "weirder" side whilst arguing that this earring was par for the course.

Margiela been different and “innovative”. love them but some shit be weird af. sold an egg carton once 💀 pic.twitter.com/bGhroGzo3L

Granted, it doesn't seem as if the negative chatter has deterred anyone from actually buying the earring.

this earring is not a want but a need

Locals mad about the margiela tag earring meanwhile I bought it